"You just need to skate this free free": Tarasova on problem quads, good spins and a non-female axel by Trusova

In the Olympic season, Alexandra Trusova will not simplify the program and will not give up five quadruple jumps. This opinion was expressed in an interview with RT by honored coach Tatyana Tarasova. She noted that the skater has a memorable program that is convenient for the athlete to skate. The specialist also emphasized that Trusova added in spins and correctly placed accents in both of her programs. 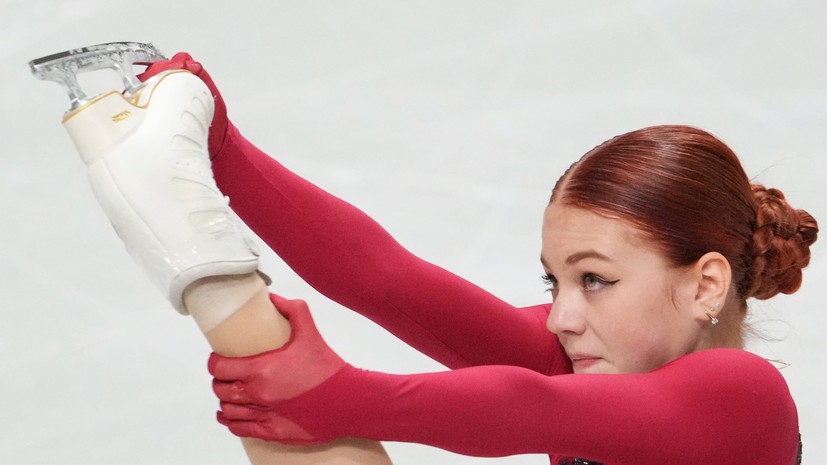 - After Trusova won her first tournament in the USA, having skated both of her programs not very well, you said: “Sasha skates very well and jumps beautifully.

But I can't like the skating, during which the skater fell. "

In this regard, the question is: can an athlete whose goal is the Olympic Games be in shape for almost six months?

And how did you solve these issues yourself, when you worked with Alexei Yagudin?

- It is unlikely that I now have the right to give someone advice on the basis of my own experience.

Each coach leads the student in his own way.

You can outline two peak points in the season, between which you can slightly "lower" the shape, changing the load every week.

- Do you need to change the content of the program during this process?

I would say that as you gain shape, speed, expressiveness of skating are added, the performance of not even every element, but of all its components: every arc, every rotation, exits, approaches to the elements, the refinement of every gesture, falling into musical accents, and so on.

Lyosha Yagudin had two quadruple jumps, which at that time was considered incredibly difficult.

Accordingly, already in the process of setting the programs, it was clear how to arrange the rest of the elements so that they did not interfere with the athlete from jumping these quads.

Trusova has five quadruple jumps, and this, of course, is a completely different story.

- At the open skates in Chelyabinsk, it seemed to me that Sasha's program is quite convenient.

- It is very important to ensure that it is comfortable for a person to ride.

It's just that now we have begun a conversation with Trusova's speech in America, and, in my opinion, it should not be judged in any way at all.

- Do you think acclimatization could have played a negative role?

I, unlike other coaches, do not believe that this phenomenon does not exist.

Acclimatization, like all related problems in the condition of an athlete, has always been, is and will be.

One day a training session may go well, or maybe not at all, so I myself never liked to come to competitions when there was no opportunity to pre-acclimatize.

While I was living with my students in America, I tried to make sure that they also performed at the American stage in the Grand Prix series, and if we had to perform in Europe, we tried to find an opportunity to return to Moscow in advance.

But not two or three days before the show.

- To what extent, from your point of view, is it generally critical that Trusova makes mistakes in jumping at the beginning of the season?

- Let's start with the fact that she is a unique girl, outstanding.

There is no such figure skater in the world, never was, and it is not a fact that she will appear in our century.

- This is not in dispute.

But everyone wants her not to be wrong, right?

- It doesn't work that way.

In figure skating, even those who do not make difficult jumps at all fall.

Take the leading male singles: not all of them will jump in an arbitrary three quads, but we are talking about five.

Of course, you need to understand that Sasha goes to the absolute maximum in the Olympic season.

It seems to me, as I said, that the jumps in her program are located very well, and this is the main thing.

So this free one just needs to be rolled.

And so that the rest of the rivals, going on the same ice with Sasha, understand that they can only fight for second place.

- When Ilya Kulik and Alexei Yagudin skated with you, at what point of the season did it become crucial that they did not make mistakes in quadruple jumps?

- If you set the goal of winning the main start, you need to strive to skate well all season.

You need to be highly appreciated already in the short program.

And at the time of Kulik and Yagudin, as you remember, the concept of "high" meant one tenth of a point.

The difference seems to be small, although in fact it is huge.

- It turns out that for Trusova now it is more important not five faultless quads in an arbitrary, but an ideal short program with a triple axel?

- On my part, it would be wrong to give any advice and recommendations, since the girl, like her entire coaching staff, is following the path that none of us have yet walked.

In training, Sasha makes his jumps so easily that you try to understand how this is even possible.

- At the same time, it is not the first season that she has been losing to her rivals in the short program.

- It's just easy to explain.

Trusova is doing a program with a triple axel, and so far she is disrupting this jump in competitions.

As soon as the axel is able to stabilize, everything will fall into place.

- How difficult, in your experience, is this last step - from an uncertain leap to a stable one?

- I do not see Trusov's lack of confidence.

During warm-ups, she jumps the axel perfectly.

Not at all feminine.

You just need to understand what a difficult jump is.

I went to it a little differently compared to training, but in time it is a quarter of a second, and already the performance turns out to be different.

- It turns out that the key to success is not in the jump itself, but in approaching it?

The extent to which these approaches have been worked out automatically.

- And the nerves have nothing to do with it?

- When the music starts playing, a high-class skater, as a rule, is not nervous anymore.

But in general, I want to say that I do not look at the performances of skaters the way you, journalists, do.

- In the sense that I perceive the rental as a whole, and do not strive to disassemble the program into its components.

This is impossible and wrong.

This should be done by a personal trainer: to disassemble jumps, other elements, visits to these elements.

Convenient, as well as inconvenient, moments are in the program of every athlete.

The professional eye catches them, of course, but this is not a reason to give someone a recommendation.

I like the choice of music, I like the emphasis on what the athlete does best in the world.

Sasha began to spin better, and this is noticeable with the naked eye.

She skates not only well, but very well.

But most importantly, I remember both of her programs.

I cannot say the same about many other productions.

Somehow they didn't stay in my head, which is very strange.

- Do you want to say that the Olympic programs should be more "catchy"?

On the other hand, perception also changes over the course of the season.

For the same couples, all programs are set primarily in such a way as to emphasize the elements.

There will be elements - the audience will begin to react accordingly.

And when the program from beginning to end goes on with applause, it is no longer so important what kind of music the skaters skate to.

- Evgenia Tarasova and Vladimir Morozov, whom Eteri Tutberidze undertook to train this season, did you like the skates?

- I would say that they are no worse than others, they are quite capable of fighting.

Some kind of global changes, such that one could say: "Wow!"

When people skate with a new coach for only a little over two months, there can be no wow effect.

At least I don't remember such examples in pair skating.

On the other hand, you asked about Tarasova and Morozov, and I’ll ask a counter question: if we are talking about the wow effect, did some other couple, no matter sports or dance, have it?

- But we are going to win the Olympic Games with these pairs.

- You yourself said that the beginning of the season is not the time when you need to make far-reaching conclusions.

As for the current situation, there is a good saying: “They don’t show half the work to the fool”.