Indignation of Medvedeva, the fracture of the Gnome Gnomycha and Milokhin in the "Ice Age": what is being discussed in the world of figure skating

Alina Zagitova, Evgenia Medvedeva and Alexei Yagudin will perform in the figure skating lovers gala show, and Danya Milokhin can take part in the Ice Age. Anna Pogorilaya told how her life changed after the birth of a child, and Alena Savchenko suspended the search for a new partner. The son of Evgeni Plushenko, Alexander, broke his arm while playing football, but continued his studies on the ice, and Elizabeth Tursynbaeva announced her retirement. 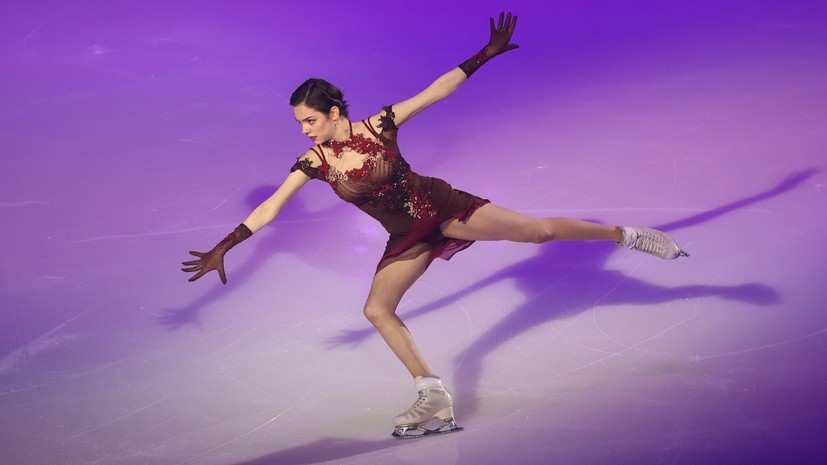 Famous Kazakhstani figure skater Elizabeth Tursynbaeva announced her retirement at the age of 21.

The ward of Eteri Tutberidze is known for becoming the first athlete to perform a quadruple jump in an adult tournament.

She included ultra-si elements in the programs even before Alexandra Trusova, who rightfully bears the title of quads queen.

According to Tursynbayeva, she decided to end her career due to an injury that does not allow her to fully train.

The figure skater, thanks to the presence of the quadruple Salchov in the program, won silver at the 2019 World Championship, losing only to the Olympic champion Alina Zagitova and surpassing Evgeny Medvedev.

In the near future, Zagitova and Medvedeva will return to the ice together, albeit as part of a gala show.

It's about the production of “Figure Skating Lovers”.

It will take place on September 25 at the CSKA Arena.

As for Medvedeva, she manages not only to train, but also to follow the news.

For example, the girl reacted emotionally to the news of the mass extermination of dolphins near the Faroe Islands.

“This should not happen in the modern and civilized world.

This is real evil "- wrote Medvedeva in Instagram stories.

Meanwhile, the two-time champion of the planet can get a rather unexpected partner in the popular Ice Age program of Channel One - Tik Tok star Danya Milokhina.

On social networks, he has already shared with subscribers the details of preparing for the show, boasting a difficult jump.

Fans want to see the young man paired with Medvedeva or Zagitova, but the Olympic champion has not yet confirmed her participation in the program either as a host or as a figure skater.

Medvedeva, on the contrary, gave such consent, so there is a chance that she will join the duet with Milokhin.

The return of Kostornaya and the trauma of the Dwarf Gnome

And the current domestic figure skaters continue to actively roll into the new season.

With the greatest interest, the fans are waiting for Kostornaya's performance, because she will go on the ice for the first time as part of an official competition after returning to Tutberidze.

In Hungary, she must demonstrate a restored triple axel.

As for Shcherbakova, she fully recovered from her injury and performed both programs flawlessly at the test skates of the Russian national team in Chelyabinsk.

The only serious drawback was the lack of branded quads, which the athlete promised to soon include in her performances.

Perhaps this will happen already in Budapest.

If the young skater no longer experiences health problems, then the son of two-time Olympic champion Yevgeny Plushenko and producer Yana Rudkovskaya Sasha, better known as Gnome Gnomych, on the contrary, was injured - he broke his arm while playing football.

The young skater unsuccessfully hit the ball with his palm while standing at the goal.

At the same time, Plushenko does not even think to feel sorry for his son, who is also involved in figure skating.

The boy's father posted a video in which the Dwarf Gnome went out on the ice, even with a bandaged hand.

She noted that she was proud of the child.

At the same time, she assured her subscribers that the Dwarf Gnome would soon be engaged in a lightweight mode.

“I'm glad that a real man is growing!

And even if there are no difficult jumps today, but what a character an eight-year-old boy has!

How much soul and strength he put into every movement!

I am proud that all my older children are real men!

Only parents of children who are athletes will understand me.

Only those who know what professional sports are will understand that for such children as our son and Yevgeny, sport is their whole life, ”Rudkovskaya said.

Pogorila's motherhood and a new stage in Savchenko's life

Anna Pogorilaya, who recently went out on the ice herself, also managed to become a mother.

The prize-winner of the planetary championship said that her life changed dramatically with the birth of her daughter Eva.

At first, the skater did not have time for herself at all, but now she manages to do fitness, yoga and stretching at home.

The athlete also explained how she learned to plan everything competently in the absence of a nanny.

“There are ten times more worries.

I also go to work sometimes.

This is a good way to switch.

By the way, I take Eva there with me, and while I am on the ice, one of the parents of the children from the group is walking with her, for which I am very grateful to them.

At the same time, the skater noted that despite all the difficulties, the appearance of the child brought "a lot of love" to her family.

“The difficulties were very big, like many, from Eve's health to feeding and my sobs.

This is incredible happiness that came to us on New Year's Eve, ”Pogorilaya wrote.

Another mother and Olympic champion Alena Savchenko gave up trying to find a new partner, the media write.

The skater hoped to return to the sport in tandem with Bruno Masso, with whom she won the Olympic Games in Pyeongchang.

But he refused for family reasons.

Now she intends to develop as a coach and is going to open her own figure skating school.

Meanwhile, Alexandra Trusova, who made a splash at the open skates of the Russian national team, has already won the first competitions of the Olympic season.

The figure skater became the strongest at the US International Figure Skating Classic tournament 2021 in the USA.

“The long-awaited season is open!

And even if the rental turned out with errors, this is only the beginning.

I really want to say thank you to everyone who patiently helps me to achieve my goal.

And, of course, many thanks to my fans!

I know for sure that you are there, even when I am at the other end of the world, ”wrote Trusova.

Diana Davis, who also competed at the US International Figure Skating Classic 2021, followed her friend to share her emotions from debuting in an adult competition.

With her partner Gleb Smolkin, she won silver in the USA.

Now Tutberidze's daughter is preparing to perform at the first adult stage of the Grand Prix in Canada.

“Thank you for the great emotions we have experienced over the past two weeks!