The Varberg coach saw the referee: "Gets just as shocked every time"

Varberg fell against Hammarby after a controversial 1-0 goal. After the match, Varberg coach Joakim Persson goes hard on the current referee Kristoffer Karlsson. - We knew before that he was like this, but you get just as shocked every time, says Joakim Persson to SVT sport. 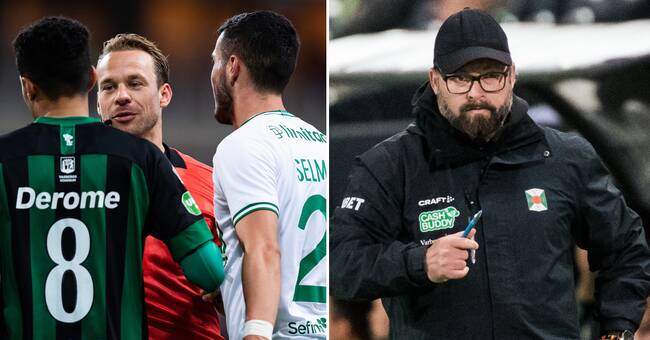 In the first half, five yellow cards were handed out - all to Varberg players.

Two of them were in connection with the controversial goal situation.

Varberg coach Joakim Persson was clear in criticizing only one person on the field - the referee Kristoffer Karlsson.

- It hails short to the right and left but only in one direction.

We're quite used to that when it comes to that person in the lead role, so it was not news.

We knew about it before but you get just as shocked every time, says Joakim Persson and continues:

- It was 5-0 in yellow cards at half time and then it is like no difficult questions we ask.

But if you ask a question, you get a yellow card.

We reacted a bit after the goal and then it hailed on new yellow cards.

When it comes to the goal itself, Joakim Persson does not want to comment on the situation, but is noticeably annoyed.

- It is not worth saying too much, he says.

Joakim Persson says that he does not talk to Kristoffer Karlsson after the match regarding his verdict.

- If he himself is satisfied, we can just accept it, there is not much to do now, Joakim Persson concludes.