The electric cars' entry into rallycross divides the audience

The rallycross of the future is here. That electricity is the only and right way for the sport, the international motorsport federation FIA has established together with the World Cup promoter. Already now, the RX2 - the second highest class - is an official electrical championship. SVT Sport was in Höljes at the World Cup premiere and took the pulse of the electric cars that not only created new safety requirements. The audience's reactions are, to say the least, twofold for the fossil-free future. 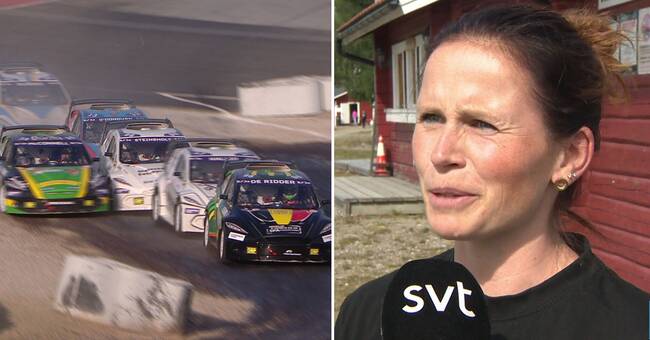 It is no exaggeration to say that the next few years will be decisive for the future of rallycross.

The days of internal combustion engines are numbered and the industry's hopes are that electricity will attract car manufacturers to the track again.

RX2e is first out as the official championship.

The former Supercar Lights class is the result of a Swedish-Spanish collaboration.

On the surface, the cars in practice look like the old RX2 cars.

It is under the shell that a new world opens up.

The new cars are fast, quiet and develop about 355 horsepower.

Next year, the main class Supercar will also be an electric car class

It will be really fun for the fans next year, says Arne Dirks, CEO of the World Cup promoter.

- The cars accelerate better and you have constant access to the engine power, he says to SVT.

The new class is closely monitored by a Spanish fire brigade.

Specially trained firefighters, who work at nuclear power plants on a daily basis, are ready if the accident occurs.

- Since there are 800 volts in the cars, we have to insulate the area in the event of an accident.

Special clothes and gloves that can handle 1000 volts and an electrician's helmet with a visor, explains the competition doctor Klas-Göran Gravander.

What does the audience think about the rallycross cars of the future?

It is quite clear that the much quieter sport is a crucial issue for the industry as the audience is divided into the live experience.

"Nice you can have a conversation next to the track", "good fights but quiet cars", "you may well accept the only way but it will take the edge off the sport", were some reactions from the audience in Höljes.

- When one mind disappears, other senses must be attracted more, in this case the sight.

The courses must, for example, be more spectacular, believes SVT expert Jonas Kruse.

See the full feature below.

Clip: The entry of electric cars in rallycross

The entry of electric cars in rallycross