Athletes stressed that the problem of the Sharjah team is not with its coach, Abdulaziz Al-Anbari, who described him as one of the best coaches who passed the team in the past period, but in three technical gaps, represented in the presence of individual defensive errors, and lack of harmony between the players in the back line, as well as 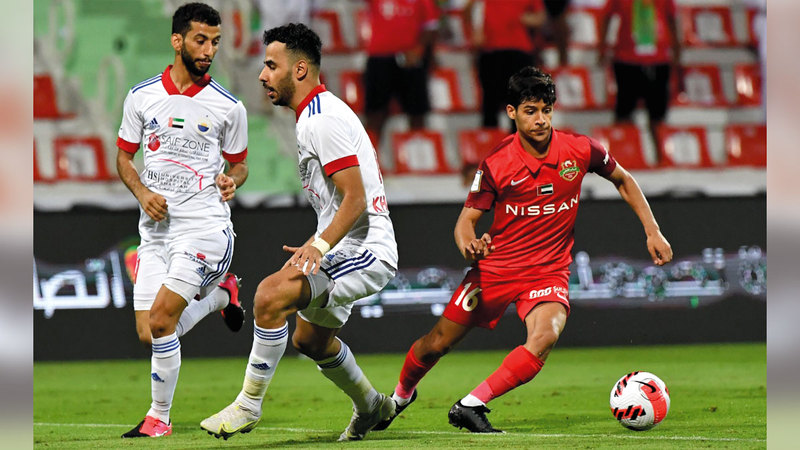 Athletes consider him capable of competing in the league, and they affirm:

Athletes stressed that the problem of the Sharjah team is not with its coach, Abdulaziz Al-Anbari, who described him as one of the best coaches who passed the team in the past period, but in three technical gaps, represented in the presence of individual defensive errors, and lack of harmony between the players in the back line, as well as The weakness of the physical side of the players, in addition to the lack of a strong bench at the level of the main players, following the team’s loss in two consecutive matches against Al Wahda in the AFC Champions League, which caused it to be out of the competition from the round of 16, as well as its first loss in the ADNOC League Against Shabab Al-Ahly in the fourth round.

They stressed the ability of the Al-Sharqawi team to compete in the league if these individual errors were addressed, especially as the team is on the verge of an important match against Al-Jazira in the fifth round of the league, warning at the same time that the continuation of such gaps would negatively affect the team, and cause He lost more points in the league, stressing that the team's strength lies in the strength of its offensive line, with the presence of the Congolese player Ben Malango and the Brazilian Caio Lucas, in addition to the presence of the Brazilian playmaker Bernard Durate.

They told "Emirates Today" that "the technical problems that Sharjah suffers from, especially in terms of individual defensive errors, are not great, and that the technical staff and the football company can address them radically, so that the team can return to the path of victories again, especially since the team has a line A very strong attack, he can make the difference and score goals at any moment.”

Sharjah suffered the first loss in the league against Al-Ahly youth, to freeze its balance at nine points, after winning three matches against Ittihad Kalba, Al Dhafra and Al Wasl.

And the former Olympic team coach, Ali Ibrahim, confirmed that “Sharjah needed to balance the squad between the Asian Championship and the League Championship, so that there is a kind of simple rotation of the players, in order to preserve the physical side of the players, but this did not happen,” noting that "The second point in the team is that Sharjah's strength is strong in its attack, so there must be a balance between defense and attack."

He added, "Sharjah needs, during the coming period, to support the team's back line, especially since the team has seven players on the bench, so what prevents it from being among the seven defensive hearts?

Why is there not one foreign player among them as a central defender?”

Ali Ibrahim stressed the need for Sharjah to have substitute players on an equal footing with the main players.

And whether coach Abdulaziz Al-Anbari was responsible for the team’s decline, Ali Ibrahim explained: “If we go back to the small details in the team’s match against Al-Ahly youth, Sharjah when he is in the front line can score at any moment, and there is no responsibility for Al-Anbari in The second goal scored by Shabab Al-Ahly from a penalty kick, from a mistake that should not occur from a great defender, as well as the third goal of Shabab Al-Ahly, which resulted from an unintended mistake, when the Sharjah defender scored a reverse goal in his own net.

For his part, the former international player in Sharjah Club and legal advisor Salem Hadid believes that the team, besides having a problem in the defense line, is suffering from an administrative and technical problem, at the same time calling on the club's football company to quickly turn around behind the team, in order to regain its strength.

Salem Hadid questioned the significance of the large number of resident players in the team, the last of whom was the player Camara, and said that “the presence of a large number of resident players blocked the opportunity for citizen players,” noting that “the departure of the player Ryan Mendes, from the team to the ranks of Al Nasr Club. In the last period, he affected the team a lot,” considering that with his respect for the existing players, the team did not score super players.

The former Al-Nasr team manager and technical analyst Khaled Obaid believes that Sharjah's weak point is in the line of defense, explaining: "The goal scored by Sharjah in his net with friendly fire in the team's match against Al-Ahly youth led to turning the scales in the match and the latest kind of frustration among the players for Al-Ahly youth to take advantage of that." At this time, team coach Mahdi Ali cleverly took advantage of this matter and intensified the attack to score the fourth goal of an individual effort.”

Khaled Obaid indicated that he does not see that the problem of the Al-Sharqawi team is in coach Abdulaziz Al-Anbari, describing him as one of the best coaches who have passed through Sharjah, who has been suffering for 27 years, while Al-Anbari achieved the league championship with the team, considering that talking about replacing him is unsuccessful, especially Sharjah is still in competition, considering that the Asian Championship is not a benchmark because there are great coaches who have failed in it.

• “The King” has a strong offensive line that can make the difference and score goals.