Alexander Emelianenko turned out to be stronger than blogger Artyom Tarasov in a duel according to the rules of fist fights. All judges gave the victory to the 40-year-old athlete, who held the first meeting in more than a year. In the first segment, his opponent looked more preferable, but in the next two he was knocked down four times and was close to knockout. After the end of the fight, the veteran said that the opponent tried to run away from him like in athletics, and also promised to continue to delight fans. 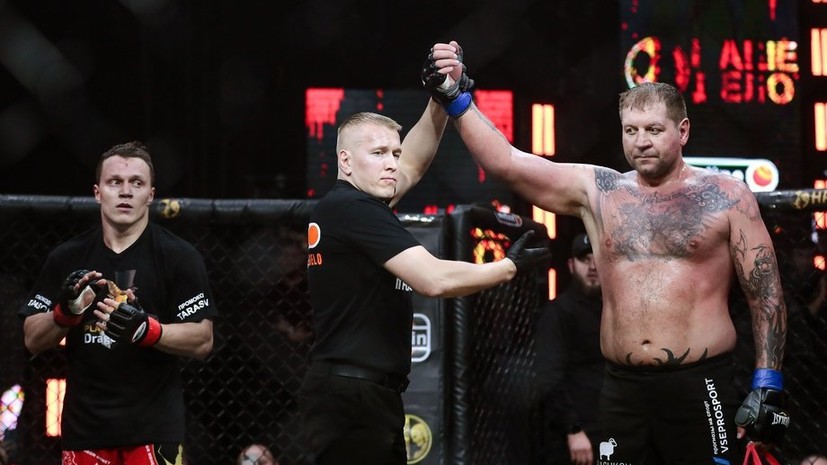 The confrontation between Alexander Emelianenko and blogger Artyom Tarasov has become another notable event in the world of domestic pop martial arts.

The fans were interested in it for two reasons at once.

First, the ex-PRIDE fighter had to return to his "cage" after more than a year's absence.

The last time he fought with Magomed Ismailov was in July 2020 and lost by technical knockout, after which he practically disappeared from the information space.

It was curious what condition the athlete, who turned 40 years old in August, will be in.

However, in recent months, judging by social networks, he actively trained and gained shape, and also, according to him, completely gave up alcohol.

It is difficult to judge how true Alexander's statement turned out to be, but he looked much better than six months ago.

The second reason why the fight was awaited with great interest is the prospects of the opponent.

Despite Emelianenko's problems, it was difficult to imagine a scenario in which he would yield to a blogger, although he was actively involved in martial arts.

The fighter himself directly stated that the opponent had no chance.

“There will be no fight with Tarasov on September 18 - there will be a beating,” the sportsman assured self-confidently.

The blogger, in response, promised not to "run away" from the venerable enemy and expressed hope for the so-called "lucky punch".

“To defend all the rounds is not to lose.

And if something works out, it will be a sensation.

As happened in the battle of Alexander with Maga Ismailov.

He also created a sensation.

Of course, I understand that technically Emelianenko is a very tough fighter.

This is a big challenge for me.

The most important thing is that people like it, ”Tarasov emphasized.

The serious difference in anthropometric data did not add to him any chances.

At the weighing ceremony, Emelianenko was 38 kg heavier, showing 124 kg on the scales.

Artyom could have had a good history of previous meetings on his side, but the sambist did not show himself too brightly in them either.

This year, within the framework of pop MMA, he lost first to strongman Mikhail Koklyaev, and then to boxer Tyson Dijon.

For comparison, Alexander easily knocked out the same Koklyaev two years ago.

Surprisingly, some experts still believed in the success of the underdog.

So, the fighter Ali Bagautinov said that the blogger is quite capable of winning.

“I have already said that Emelianenko has better chances, because he is still a fighter who has been training for 20-30 years.

This is not just a fighter from the yard, but a high-class fighter.

I have known him as an athlete for a very long time.

But Artyom has chances, since this is a sport.

We must not forget that there are also varnish-punchy.

I wish both of them good luck and avoid injuries, ”the Usachev TV YouTube channel quotes the athlete.

The fight itself within the framework of the pop-league "Our Business" was supposed to take place according to the rules of fist fights, but in gloves for mixed martial arts.

At the same time, the opponents were allowed to inflict backfists, that is, blows with the back of their fist.

Tarasov had to withstand three rounds of two minutes each.

As a result, the sambist managed to surprise the audience in an amicable way.

The first segment was completely behind him.

Although he was significantly inferior to his opponent physically, he used his main advantage - speed.

Tarasov easily ran away from the overweight Emelianenko and, closing the distance in a timely manner, threw out a series of rather strong blows.

It is difficult to say how much they shocked Alexander, but after a series of good hits from the right, it seemed that the fighter still swayed.

He himself simply could not keep up with the nimble opponent and practically did not get him.

However, it was obvious that sooner or later the blogger will leave the forces, and the counterpart will show his knockout power.

This happened in the second round.

In the first half of it, Tarasov still continued to resist, but in a couple of episodes he was forced to lie down so as not to be knocked out.

Alexander out of habit tried to finish off his opponent, as in mixed martial arts, but he was restrained by the judges.

And the first really serious hit passed a minute before the gong.

Tarasov was knocked down, but was able to continue the fight.

In the final three minutes, the athlete's advantage became even more tangible.

First, he dropped the opponent again with two short jabs.

He managed to get up.

Then Emelianenko suffered a dangerous blow to the jaw.

The sambo wrestler miraculously did not get knocked out and to the end he simply ran from the opponent.

In total, he managed to survive four knockdowns.

Despite the successful start of the confrontation, he did not manage to compete with the eminent veteran, although he lasted all six minutes.

The judges unanimously gave the victory to Alexander.

It is not easy to judge the condition of a 40-year-old fighter.

It was obvious that he could end the fight with one blow, but held back so as not to end the meeting too quickly.

Either way, both made good money.

“I let you beat me, but the slash - I punched myself with my fist.

I will continue to delight you with victories and enter the ring.

Tarasov ran away from me, I didn't even sweat.

He worked easily and did not strain.

And he ran like in track and field athletics ”, - quotes the words of the TASS winner.

For Emelianenko, this is just the beginning of a whole series of fights.

Back in August, his manager, Azamat Bostanov, announced that his client would have to enter the "cage" four times in four months.

According to him, after Tarasov, Djigan, Vladimir Mineev and Vyacheslav Datsik are waiting for the athlete.

True, so far only the signing of a contract with the rapper is known.

Their confrontation should take place on November 4.

Moreover, the ex-PRIDE fighter delighted fans with the news of active negotiations with the team of another honored veteran of Russian MMA, Sergei Kharitonov.

“The Khariton's manager just the other day called my manager Azamat and offered to hold two fights - one according to the rules of boxing, the other according to the rules of MMA. In principle, we are ready and do not refuse to hack and send Khariton into hibernation again. True, I don't know when these fights will take place - maybe it will be a spring or summer hibernation, but he will have to sleep in the ring, "Fighttime quotes Emelianenko.