The General Sports Authority and the Organizing Committee of the “Emirates Sports in 50 Years” exhibition revealed during a press conference held last Thursday at the Grand Hyatt Hotel in Dubai, the participation of 25 Arab and international stars in the exhibition’s activities, and it comes within the framework of the UAE’s celebration of the 50th anniversary of the establishment of the association. 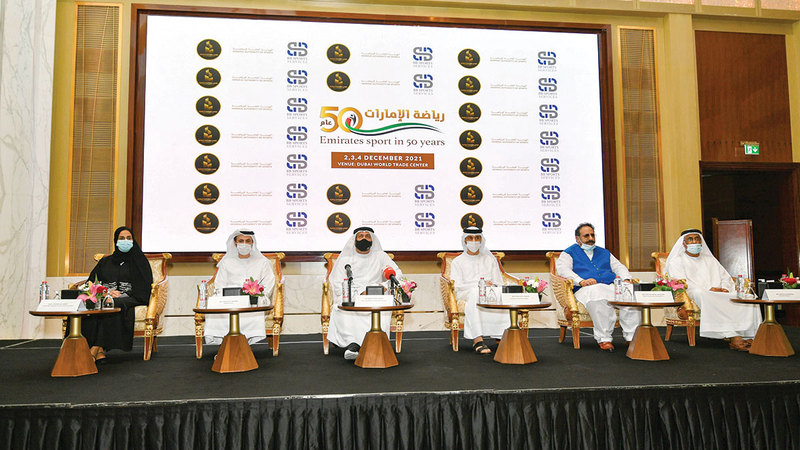 Khaled Al Midfa: The event is an important initiative that documents the country's sporting history

During a press conference held last Thursday at the Grand Hyatt Hotel in Dubai, the General Sports Authority and the organizing committee of the “Emirates Sports in 50 Years” exhibition revealed the participation of 25 Arab and international stars in the exhibition’s activities, and it comes within the framework of the UAE’s celebration of the 50th anniversary of the founding of the federation. It is scheduled to be held at the Dubai World Trade Center in early December, coinciding with the UAE's celebration of the National Day.

The exhibition, which is organized by BP Sports Services, sheds light on the legacy of fathers and grandfathers, and sports glory, through stations from the memory of time made by the Knights of Achievement with their sacrifices and unlimited giving. In the sports glory industry of the UAE.

During the conference, the latest preparations for the exhibition, and the most prominent entities, institutions, bodies and personalities that will participate in it, were presented. The General Sports Authority and the Organizing Committee expressed their pride and pride in dedicating two wings to the late Sheikh Zayed bin Sultan Al Nahyan, the founding leader, may God rest his soul, and Her Highness Sheikha Fatima bint Mubarak, President of the General Women's Union, President of the Supreme Council for Motherhood and Childhood, and Supreme President of the Family Development Foundation (Mother of the Nation). ).

And the organizing committee announced, through the general coordinator, Abdullah Murad, that among the participating Arab and former world stars: the Brazilian Ronaldinho, the Egyptian Mahmoud Al-Khatib, and other athletes.

He continued, "We are currently making efforts to attract former football stars, such as the Italian Francesco Totti, and the two former Dutch stars, Van Basten and Ruud Gullit.

For his part, Khaled Issa Al Midfa, Assistant Secretary-General of the authority, said: The exhibition is an important initiative documenting the sporting history of the UAE over fifty years, and the event is getting brighter with the announcement of the official participation of two core wings representing the most prominent supporters of the sports march, by joining a pavilion bearing a name dear to everyone's hearts. The late father, Sheikh Zayed bin Sultan Al Nahyan, founder and builder of the renaissance of the UAE, may his soul rest in peace, who realized early on the importance of building man in all aspects, including sports, and his unlimited contributions and support for sports and athletes had a great impact on the development of sports and achievement, as well as the pavilion “Mother of the Emirates” Her Highness Sheikha Fatima bint Mubarak, who contributed, supported and continues to support women’s sports in the country. Under this support, women have achieved many local and international achievements, and to be a message to the world, as we live in the atmosphere of one of the largest global gatherings, the Expo 2020 in Dubai .

In turn, the coordinator of the Elite Program at the Sheikha Fatima Bint Mubarak Academy for Women's Sports, Fatima Saif Al Ameri, confirmed that, coinciding with the celebration of the golden jubilee of the UAE, highlighting the achievements in the sports field would not have happened without the solidarity of various institutions and systems to achieve the desired results under the guidance of the rational leadership. .

She added: We at Fatima Bint Mubarak Academy appreciate and appreciate the efforts of all the women of society who have been a major reason for our continuous success over the past ten years.

In turn, CEO of Noble Investment Company, the platinum sponsor of the exhibition, Asif Ali, expressed his thanks to the General Authority for Sports and BP Sports Services for giving them the opportunity to sponsor a large event of this size, stressing their keenness to provide all the capabilities necessary for the success of this event.

Abdullah Al Raisi: The National Archives is keen to document all the achievements

He stressed that documenting the sporting achievements of the UAE over 50 years deserves a large occasion of this size, stressing the National Archives' keenness to document all achievements, calling on federations, clubs and sports bodies to document all results and photos, describing these documents as a witness to all the successes achieved by the state. over five decades.

Al-Raisi pointed out that the National Archives strives with utmost effort to monitor every achievement so as not to lose the rights of the state and the accomplished athletes.

Special postage stamp for the occasion

Emirates Post spokesman Obaid Al Qatami revealed that Emirates Post will issue a special postage stamp on the occasion of the sports exhibition, noting that this stamp will not be limited to within the country, but will be an ambassador touring all over the world.

The most prominent participating stars