Marcus Sylvegård: "The judges are extremely bad - I will probably be fined now"

Malmö beat Oskarshamn 5-2 on away ice in the SHL, but despite that, emotions swelled for Marcus Sylvegård. After a brawl at the end of an eventful first period, he raged against the judges. - I will probably be fined now because I said something bad to the judges in this PK-Sweden, he says to CMore. 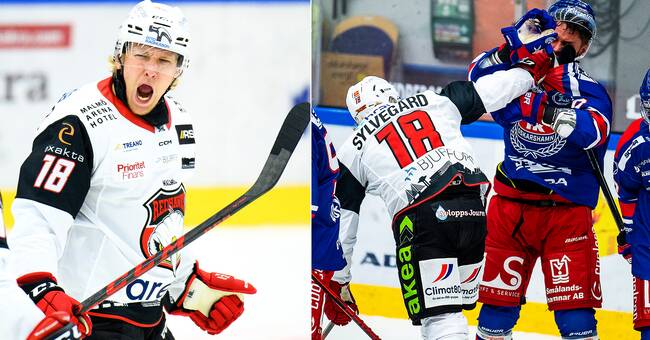 The first period was a real goal celebration and already after five minutes, 35-year-old Carl Söderberg scored his first goal since returning to Malmö.

Söderberg, who made almost ten years in the NHL, got the puck from Marcus Sylvegård and put 1-0.

It just kept popping in the goal cages, Sylvegård made it 2-1, Johan Johnsson equalized and already after 13 minutes came the match's fifth goal.

Christoffer Forsberg took advantage of the home team's carelessness and put a backhand in a numerical disadvantage.

At the end of the period, Sylvegård got into a fight with Tomas Zohorna and both went on a five minute expulsion.

The Malmö player was not gracious in the break interview that followed.

Something the judges do not see.

I think they are extremely bad.

I will probably be fined now because I said something bad to the judges in this PK-Sweden, he says to CMore.

In the second period, Carl Persson extended Malmö's lead to 4-2.

Oskarshamn played well at times, but did not get a hole on Daniel Marmenlind in the Malmö box office.

At the end of the period, another Sylvegård, namely Emil, made it 5-2 in the open box.

- I think we give away simpler goals than Malmö does, says Oskarshamn's coach Martin Filander.

Malmö has started the SHL season in the desired way as they have two straight victories.