Manchester United fiasco in Bern, Bayern win in Barcelona and four penalties in Seville: how the Champions League group stage kicked off

Manchester United lost sensationally away to Young Boys despite a goal from Cristiano Ronaldo, while Barcelona conceded three unanswered goals from Bayern and lost at the start of the tournament for the first time in 24 years. Atalanta escaped defeat in the match against Villarreal thanks to an assist from Alexei Miranchuk, and the Belarusian referee Alexei Kulbakov awarded four penalties in the Sevilla-Salzburg match. RT tells how the start of the Champions League group stage was remembered. 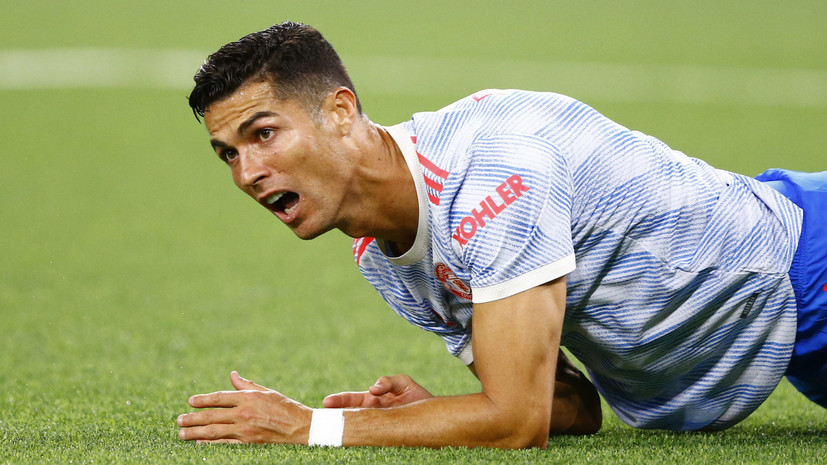 For Manchester United, the start of the current Champions League was a failure. Ole-Gunnar Solskjaer's wards sensationally lost to Young Boys on the road. And this despite the fact that already in the 13th minute, the Mancunians opened the scoring thanks to the efforts of Cristiano Ronaldo. Until now, the Portuguese has hit the gates of 35 teams in the main European Cup, and now the Swiss team has been added to their number. But the main event was the striker's repetition of the record for the number of matches played in the tournament. He has 177 meetings to his credit, which allowed him to catch up with his former teammate Iker Casillas.

However, Ronaldo's mood was spoiled by his partners.

In the 35th minute, Aaron Wan-Bissaka drove hard into the opponent's ankle, received a direct red card and left the team in the minority.

Manchester United pressed against the goal and first allowed Moomin Ngamale to excel after a cross from the flank, and conceded a second time in the fifth minute of stoppage.

Jessie Lingard, who entered the field instead of Cristiano, made a gross mistake and actually brought Teozon-Jordan Sibacho one on one with David de Gea.

Thus, the "Red Devils" lost the seventh of 11 matches in the Champions League under the leadership of Solskjaer.

Ronald Koeman's charges also started unsuccessfully in the tournament. The Catalans not only did not strike a single shot on target, which has not happened to them since the 2003/04 season, but also lost in the opening match of the Champions League group stage for the first time in 24 years. In 1997, they were beaten by Newcastle (2: 3), however, then it did not happen at the Camp Nou. As part of the British, Faustino Aspirilla scored a hat-trick, while Luis Enrique and Luis Figo scored against Blaugrana.

This time Barcelona also conceded three times, although no one was able to score a hat-trick in the opposition.

Thomas Müller opened an account, after which Robert Lewandowski added a double to this.

And in all three cases, it was not without a bit of luck.

The goal of the German was largely due to a successful ricochet from the opponent's body, and the Pole was twice in the right place after the ball hit the post.

However, this does not negate the fact that over the past three seasons it is Lewandowski who has been the top scorer of the Old World.

During this time, the forward scored 113 times in all tournaments - 37 times more than his closest pursuers Cristiano Ronaldo and Kilian Mbappe (both 76 each).

The match at the El Madrigal stadium turned out to be unusually intense and included the removal of Francis Coquelin for two successively thwarted attacks and four goals at once. And if not for the phenomenal performance of Atalanta goalkeeper Juan Musso, there could have been many more. The Argentine made five saves, but was powerless twice. First, Manu Trigueros took advantage of the defenders' mistake and closed the pass from the flank, and then Arno Gruneveld, who came on as a substitute, scored a powerful blow. Moreover, both goals were scored by the excellent actions of Unai Emery's wards in counterpressing.

Atalanta responded with goals from Remo Freuler and Robin Gosens, and Alexey Miranchuk was directly involved in organizing the second.

The Russian appeared on the field in the 79th minute, and after four he chalked up the first assists of the season.

The midfielder tried to handle the cross from the flank, but instead threw the ball away just under the blow of the German.

By the end of the meeting between Sevilla and Salzburg, there was also one less player left on the field.

At the 50th minute, the second yellow card was received by the striker of the Spanish team Youssef En-Nesiri, who tried to provoke Alexei Kulbakov to assign a penalty to the opponent's goal.

The Belarusian referee did not believe the Moroccan and presented him with a mustard card for simulation.

At the same time, only in the first half, the referee pointed to the point four times, and three times - in the penalty area of ​​the owners.

However, this did not help the guests to take away three points from the stadium "Ramon Sanchez Pizjuan".

Karim Adeyemi was unable to take advantage of his chance, and Luka Suchic definitely performed only one of two attempts.

Moreover, if the German struck not in the best way, then the barbell prevented the Croat.

In turn, the charges of Julen Lopetegui were much less wasteful.

Ivan Rakitic easily spread the ball and the goalkeeper in different corners and went down in history as the author of Sevilla's 100th goal in the Champions League.

Immediately two matches of the playing day ended in a goalless draw, but they turned out to be quite dramatic.

In both, there were goals scored, which were subsequently uncounted after watching the video replay, and in one again, it was not without removal.

This time, Wolfsburg defender John Brooks was kicked off the field after deliberately playing with his hand in an attempt to interrupt Lille's attack.

All things considered, the "wolves" should be happy to have taken the glasses out of France.

After all, the main referee Danny McKeley canceled the capture of their goal.

In the 50th minute, Jonathan David completed an exemplary counterattack, but a few seconds before that the ball went over the sideline.

In the meeting between Dynamo and Benfica, a curious episode took place at all, when the referee, by mistake, almost sent one of the players to the podtribunka ahead of time. However, Englishman Anthony Taylor remembered in time that he had not previously shown Denis Garmash a yellow card and allowed him to stay on the field. As a result, the Ukrainian helped Nikolai Shaparenko to distinguish himself in the third compensated minute. True, the goal was canceled due to an offside position.