The National Games is about to open, and the veteran rookies are fighting for the best!

Chinanews client, Beijing, September 15 (Reporter Xing Rui) On the evening of the 15th, the opening ceremony of the 14th National Games will be kicked off at the Xi'an Olympic Sports Center in Shaanxi. As a high-level comprehensive sports meeting in China, a group of veterans and rookies will compete for the highest honor here. Facing these strange or familiar faces, how much do you know about t 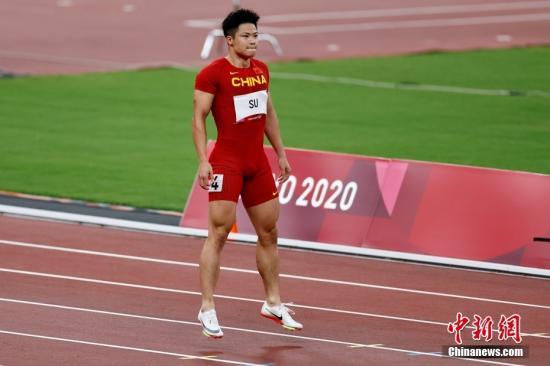 Chinanews client, Beijing, September 15 (Reporter Xing Rui) On the evening of the 15th, the opening ceremony of the 14th National Games will be kicked off at the Xi'an Olympic Sports Center in Shaanxi.

As a high-level comprehensive sports meeting in China, a group of veterans and rookies will compete for the highest honor here.

Facing these strange or familiar faces, how much do you know about them?

Data map: On August 1, in the men's 100-meter semi-finals of the Tokyo Olympic Games, Chinese athlete Su Bingtian won the group first with a time of 9.83 seconds and successfully advanced to the finals and broke the Asian record. He also became the first man to break into the Olympic Games. Chinese in the rice finals.

The picture shows Su Bingtian warming up before the game.

Soon after the Tokyo Olympics, many Olympic athletes will start their journey to the National Games.

The 32-year-old "100-meter flying man" Su Bingtian began to prepare for the National Games after the end of the quarantine.

In the semi-finals of the 100-meter trapeze in the Tokyo Olympics, he ran a good time of 9.83 seconds and became the first Chinese to enter the men's 100-meter final in the Olympics.

Such achievements are of milestone significance for both individuals and Chinese track and field.

What is interesting is that Su Bingtian, who has participated in the three National Games, has not yet won the gold medal in the 100-meter single event.

Now that he is in a good competitive state, he undoubtedly hopes to make new breakthroughs in Shaanxi.

The shot put star Gong Lijiao, who is the same age as Su Bingtian, also started his journey to the National Games.

On the 13th, she posted a photo of her staying in the National Games Village on personal social media. She will represent the Hebei team in women's shot put and women's throwing team competitions.

In the just-concluded Tokyo Olympics, Gong Lijiao successfully won the gold medal in the shot put event and won the first field event gold medal in the history of the Olympic Games for the Chinese sports delegation.

In the National Games, she is undoubtedly a popular player to win the championship.

But for Gong Lijiao, there are goals to struggle both inside and outside the arena.

In addition to athletic performance, she hopes that through her own efforts, more people can understand shot put.

Data map: On the evening of July 30, the men's singles final of the Tokyo Olympic Games ushered in the "civil war" of Chinese players.

In the end, Malone defeated Fan Zhendong 4:2 and successfully defended his title.

This is the 19th gold medal of the Chinese delegation in this Olympic Games.

The picture shows Malone's heart-shaped posture after the game.

A few days ago, national table tennis captain Ma Long confirmed that he would withdraw from the National Games singles competition. He focused on the men's team and men's doubles.

Malone, born in 1988, will celebrate his 33rd birthday in October.

The Shaanxi National Games will be the 5th National Games that Ma Long participated in. He has been on the men's singles podium four times before, winning 2 golds, 1 silver and 1 bronze.

Audiences familiar with table tennis know that compared to the Olympics, the National Games table tennis singles competition can be called "hell-level" difficulty.

Yan Ni, deputy attacker of the Chinese women's volleyball team, said on personal social media that she will represent the Liaoning team in the National Games.

At the Tokyo Olympics, 34-year-old Yan Ni missed part of the games due to injury.

After a period of rest, she still chose to return to the arena.

However, this National Games is likely to be the last stop of Yan Ni's volleyball career.

After a year has passed, it is time for her to embark on another new journey.

In addition to the veterans who have been on the field for many years, a "youth storm" was also set off at the National Games.

At the Tokyo Olympics, 17-year-old Guan Chenchen successfully won the gold medal of the balance beam with a big heart and became popular on the Internet with an action similar to "kangaroo shake".

In this National Games, she will represent the Zhejiang team.

It is worth mentioning that the final of the women's balance beam will be held on the 26th, and the day before happened to be Guan Chenchen's 17th birthday.

Whether she can get a special "birthday gift", we will wait and see.

Data map: On July 29, in the Tokyo Olympic Women's Volleyball group match, the Chinese team lost to the Russian athletes 2 to 3.

As a "post-00" teenager, at the last National Games, Li Yingying won the youth group championship with the team.

After the Tokyo Olympics, Li Yingying's mentality and skills have become more mature.

The two major national players duel, who is better, the result is undoubtedly worthy of the fans' expectations.

The duel between her and Chen Meng is undoubtedly a highlight of the table tennis event.

Data map: On August 2nd, Beijing time, in the women's 87 kg weightlifting competition in the Tokyo Olympics, Chinese athlete Li Wenwen won the championship with a snatch of 140 kg, a clean and jerk of 180 kg, and a total score of 320 kg. Among them, the snatch, the clean and jerk and the total score The results all broke Olympic records.

The picture shows Li Wenwen celebrating after the game.

Weightlifting Olympic champion Li Wenwen, who is the same age as Sun Yingsha, entered the National Games Village on the 13th.

Although Li Wenwen easily won the championship in the women's lift above 87 kg in the Tokyo Olympics.

But in her view, the competition in the National Games is more intense than that in the Olympics.

"Weightlifting may be relatively simple to win a world championship, but it is actually more difficult to win a national championship. There are many strong athletes in China. There are Rio Olympic champion Meng Suping at my level. The competition is very difficult." Said this in an interview.

Before the opening ceremony of the National Games, many projects have been competed.

Athletes in diving, track cycling and other events have finished their journey to the National Games.

However, there are still many major projects that will be launched one after another.

Let us look forward to the performance of these veteran rookies.