Malmö FF stood up well in the beginning of the match against Juventus and had several good initiatives going forward, at the same time as they let go very little backwards. It looked good. Awhile. But this evening ended just as most had feared. Big loss, 0-3, against Juventus after a few nightmare minutes at the end of the first half where Dybala and Morata made both 2-0 and 3-0 within the space of a minute. 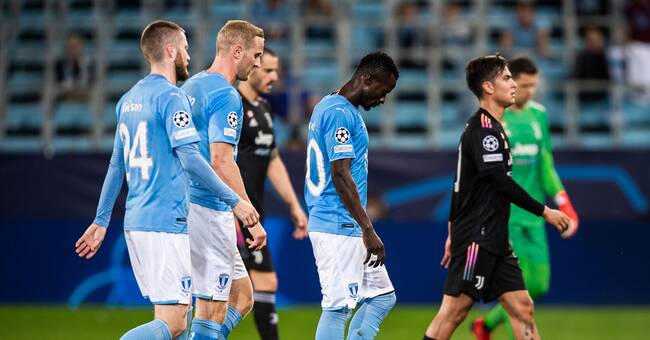 - We tried to invite to dance .... But it plays classic Italian ... it goes slowly, slowly and then they strike and we lost the match in the last two minutes of the first half, said a disappointed Anders Christiansen to C More afterwards.

The sky blues started really well otherwise, as I said.

After 17 minutes, Sören Rieks came in from the right, feinted, then sped past the off-balance defender to make the score 1 - 0, giving Jon Inge Berget the lead.

Rieks did not get the hit he needed when he was free in front of the Juve goal.

The air then went out of the Scanians in the 23rd minute.

Juventus attacked with a few more players and MFF lost the mark on left-back Alex Sandro who snuck up in the penalty area.

Sandro met a post from Cuadrado with his head almost down at grass height.

The hope lived for Malmö until the 43rd minute when Lasse Nielsen clumsily held on to Morata inside the penalty area and the referee blew for a penalty.

Dybala scored 2-0 from eleven meters and just after the kick-off came the next cold shower for the home team.

A long kick went through Rablot and Dybala, who tricked Lasse Nielsen, and reached a rushing Morata who lobbed the 3-0 ball over Diawara in the Malmö goal.

The second half was pretty uneventful.

Juventus had another ball in the net but there the Scanians were saved by an offside blow by Moise Kean.