"No real documents came": what is known about Barcelona's interest in Zakharyan

Dynamo midfielder Arsen Zakharyan may continue his career at Barcelona, ​​journalist Nobel Arustamyan said, noting that the Spanish club is ready to start negotiations on the player's transfer in the near future. At the same time, the Moscow team said that they had not received official offers for the transfer of the player, and the former midfielder of the Russian national team Igor Ledyakhov explained the appearance of such rumors by agency games. 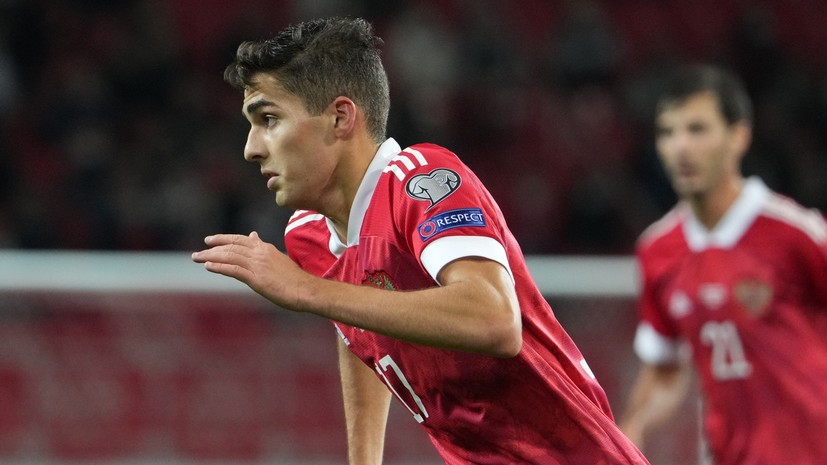 Arsen Zakharyan continues to strengthen his status as one of the most talked about young football players in the country. The 18-year-old midfielder successfully started the season at Dynamo, and in September made his debut with the Russian national team in the 2022 World Cup qualifier. And it is not surprising that rumors of interest in him from European clubs began to appear in the press. Moreover, some of them feature the Catalan “Barcelona”, which is in the process of restructuring after the departure of the legendary Lionel Messi.

Nobel Arustamyan announced the intention of Barcelona to acquire Zakharyan in his Telegram channel.

According to an insider, the Barcelona scouts have allegedly already flown several times to Moscow for Dynamo matches to watch the midfielder's game, and were pleased with what they saw.

In addition, the former Match TV commentator emphasized that the Catalan club expressed its readiness to hold negotiations with both the Russian team and the player himself, and he is ready to start them in the very near future.

“It is quite possible that this fall Barça will want to agree on Zakharyan's transfer and fix a future deal.

It could take place in the summer of 2022, depending on how the negotiations turn out.

Zakharyan himself plans to play at least this season in full with Dynamo, - wrote Arustamyan.

The first to react to this news was the footballer's father Norayr Zakharyan.

In a conversation with Sport24, he said that at the moment he did not want to speculate on the possible transfer of his son to the Catalan club, and added that now is not the best time to create hype around Arsene.

In turn, the agent of the midfielder Pavel Andreev noted that he personally did not receive offers for the transfer of his client.

“Maybe they have addressed to Dynamo, but they didn’t come to us.

Many people were interested in Arsen, but no real documents came, there are many calls, "- quotes the representative of the match TV midfielder.

The club itself also assured that Zakharyan's transfer to another team was not substantively discussed.

However, they confirmed that the Russian footballer is receiving attention from a number of European teams.

“We know about this interest, we treat it calmly, with understanding.

The footballer himself is completely focused on football, on his game and on preparing for the next calendar match, "- quotes the general director of the blue-and-white Pavel Pivovarov" Championship ".

The prospect of continuing a career with a team like Barcelona can turn the head of many footballers.

But according to Sport-Express, Zakharyan is not one of them.

According to him, the midfielder himself is unlikely to agree to move to the Spanish grand in the near future.

Those around him believe that career development should be smoother, and the transfer to Blaugrana will become too much of a leap up.

In such a tough competition, he may have trouble getting game time, which risks slowing down his progress.

At the same time, some representatives of the football world are sure that Zakharyan should not miss the chance to try his hand at Barcelona, ​​if he gets it.

According to the famous agent and former sports director of Dynamo Roman Oreshchuk, such clubs are not invited twice.

“If Barcelona is really interested in them, then you need to pack your things and urgently fly to the capital of Catalonia, you will get stronger there.

You and I do not know if this is stuffing or the truth.

But if this is all so, then there is no need to ask anyone.

They can get this money and give it away with their eyes closed.

If they are interested, then they should buy ... We are waiting for Zakharyan's soon transition to Barcelona, ​​- said Oreshchuk.

The functionary believes that even though Zakharyan now has enough flaws in the game, he also has great potential and is very far from reaching his ceiling.

And it is in a club like Barcelona that the midfielder could progress as quickly as possible.

In turn, the ex-mentor of Dynamo Sergei Silkin was not surprised by the news that appeared about the possible departure of Arsen to the camp of blue garnet.

In his opinion, it was clear that close attention would be riveted to the player, and the desire of many teams to get a promising footballer is absolutely natural.

“Whether he should leave in the near future is another question.

Now he has tried himself in the national team.

It seems to have flashed, but not particularly.

It seems to me that going abroad is already in the status of a permanent player of the national team, and where you will play, and not in order to prove your worth there.

On the other hand, it costs a lot to get into such a large team, ”said the specialist.

However, he is not sure that Russian players should leave their championship even to play in average European teams.

Moreover, there is an example of Denis Cheryshev from Valencia, who, according to Silkin, although he has been playing in Spain for a long time, was never able to get into a top-level club.

At the same time, Zakharyan's transfer to another team, as well as his form by the summer of 2022, will largely depend on the situation at Dynamo.

“Such young guys as Chalov, Zakharyan and Tyukavin flashed, but the rivals look after them and see their shortcomings, learn to play against them.

Plus, the charge at the beginning of a career, in the future, often fades a little.

It turns out to be a recession, and it is not clear how Zakharyan will endure it.

I think, while he has not yet taken place as a football player.

For example, the last match against Nizhny Novgorod was not played so brightly.

Star athletes, after all, who are they made of?

These are those whom nature has awarded with certain qualities, plus hard work.

As soon as the requirements for oneself decrease, that's all.

But he is able to turn into a good football player if he has the motivation to grow, ”the specialist summed up.

Former footballer of the Russian national team, "Spartak", and Gijon "Sporting" Igor Ledyakhov stressed that he treats the news about the possible transfer of Zakharyan as a rumor.

“I myself live in Barcelona and communicate very closely with the representatives of the Catalan club. I know all the local cuisine. At least no one here voiced any interest. In Spain, nothing is known about this. The boy is only playing for the second year, and besides, he did not start this season as brightly as he ended the last one. Barcelona is watching 99% of its players. Therefore, for now, I would classify all these conversations as rumors. These are all agency games. As soon as a player scores in our team, they start promoting him, ”Ledyakhov said.

The expert admitted that, in view of the presence of great talent, some European clubs may show interest in the player, and also noted that the Spanish championship is quite suitable for a young Russian.

In his opinion, Zakharyan has suitable qualities for Examples, but it is still too early to talk about him as an accomplished footballer.

Ex-midfielder of "Spartak" expressed the opinion that if there is an offer from the European club, 18-year-old Zakharyan should think about the transition.

However, he noted that it might be useful for him to finish this season at Dynamo.

“If a footballer matches the ambitions of the club that wants to sign him, then his age does not matter. This is also important for career development, so you should not pay attention to how old he is. Is Arsen able to withstand and overcome all possible recessions? I think the fact that the coach trusts him plays a big role here. The same Suleimanov in Krasnodar, when he was expected to move to Borussia, did not have a permanent place in the start. And Zakharyan showed himself well that year, and now he is a base player. Even when something does not work out for him, Schwartz still releases him from the first minutes. The trust of a mentor is worth a lot, especially for an 18-year-old player, ”said Ledyakhov.