A question of taste: Trusova performed five quads and overshadowed Valieva at the test skates of the Russian national team in Chelyabinsk

Alexandra Trusova made a splash in her free dance at the test skates of the Russian national figure skating team in Chelyabinsk. She was the first in history to land five quads in one program without falling and made a significant bid to participate in the Olympic Games. The shadow favorite of the season Kamila Valieva fell twice during the performance of last year's "Bolero" and, in general, did not look so impressive. Elizaveta Tuktamysheva also made mistakes during the jumps, but at the same time, according to the general impression, she did not yield to other competitors for a place in the national team. 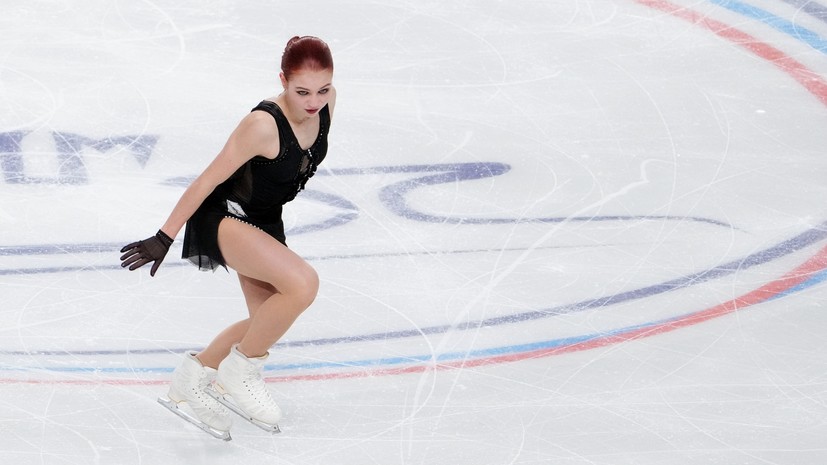 The upper tier of the Chelyabinsk Traktor-Arena was given to girls on Sunday. Six large posters, decorated with hearts and various words of support, testified to the fans' fiery love for the six Khrustalny skaters - Anna Shcherbakova, Alexandra Trusova, Kamila Valieva, Dasha Usacheva, Alena Kostornaya and Maya Khromykh. The rest of the skaters, presumably, in the presentation of the Chelyabinsk public were assigned the role of, albeit a star, but extras.

This was partly understandable: with all due respect to the athletes who came to Chelyabinsk, the girls' segment was central - even the ticket prices reflected this.

Well, the journalists were habitually engaged in fortune-telling: which of the six listed will receive three Olympic vacancies in December and then will compete for victory at the Games in Beijing.

It is clear, however, that with such a level of performance, which has been demonstrated for several years by Russian singles, it would be simply indecent to talk about any other medal, besides the gold one.

A few minutes before the start of the performances, an elderly cheerleader sitting nearby suddenly turned to me: “Please write about Liza.

As much as she did for figure skating, hardly any of the athletes will be able to. "

Liza Tuktamysheva admitted shortly before the start of the season that she would do her best in order to get to the Olympics.

It so happened in her life that the Petersburg woman could not qualify for the Games in Sochi or the competitions in Pyeongchang.

In Beijing, Liza would clearly be useful to the Russian national team - at least to perform a short program with a triple axel in a team tournament: after all, if we talk about the stability of this still piece for women jump, few figure skaters are able to argue with the most talented student of Alexei Mishin ...

But after Tuktamysheva, Kamila Valieva came out on the ice of the Chelyabinsk arena, and she had to admit: with her rental, and with a huge triple axel in particular, she eclipsed a potential rival.

It was high time to think: does Tuktamysheva even have a chance to fight this season for getting into the national team?

Both new programs turned out for the 2015 world champion to be solid and very suitable for her, perhaps one of the best in her career in terms of choreographic design, but they did not even come close to producing the effect that the Olympic productions of Yulia Lipnitskaya in Sochi or Alina Zagitova left at different times in Pyeongchang. Moreover, an arbitrary Sunday ride (with a butterfly instead of the second axel and a fall on the lutz) Liza did not succeed.

For the sake of fairness, it must be said that the staged wow effect did not happen to any of the skaters. The main decoration of Trusova's free program remained the most difficult jumps, Kostornaya's trick was sliding, and Shcherbakova was distinguished by the usual penetration of skating. But without a cascade in the short program and without quadruple jumps in the free program, the reigning world champion looked no more convincing on the ice than Khromykh (in the free program Maya showed a very high-quality cascade with a quadruple sheepskin coat) or Usacheva. And what could be more dangerous for a leader in the main season of the fourth year than being like everyone else?

Only Valieva's last year's "Bolero" stood out among the free programs.

But this production, firstly, was declared Olympic a year ago, and, secondly, a certain "pieceiness" of the relationship probably played in favor of Kamila: after Trusova and Kostornaya left the group, the talented junior almost remained the only hope of coaches for the Olympic season.

Who could have guessed then that in less than a year the runaways Sasha and Alena would return, two-time European champions Evgenia Tarasova and Vladimir Morozov would join the group, and Daniil Gleichengauz would be faced with the need to simultaneously stage more than a dozen potentially Olympic programs, each of which in should ideally look like a masterpiece of choreographic thought on ice?

Talking a few years ago with Ilya Averbukh, the author of many "champion" productions, I quoted him as saying by another famous director Nikolai Morozov that the choreographer, as a rule, never knows how successful this or that production will be and how strong it is " will sound. "

“I completely agree with this.

When you put a program for a single skater, you always find yourself hostage to how an athlete will perform this program.

I understand that I am now spitting into my own well, but if a person flawlessly and on the courage performs all the elements, it becomes completely unimportant what exactly he is rolling.

If the athlete falls after the first cascade, and then begins to "chase" the jumps, it becomes not up to the images - there is a completely dead rolling, "Averbukh replied.

An illustration of these words was the rental of Trusova.

If the top three for Beijing were already determined, the first two places in it would probably be taken by Sasha and Kamila, and in that order. Valieva has grown noticeably over the summer, but last year's supply of power and a huge amplitude of jumps turned out to be enough not to sacrifice complexity: triple axels remained in their places, one in each program, and a quadruple salchow with two sheepskin coats in an arbitrary, but in a Sunday box office Kamila fell twice. As for Sasha, she met the Olympic season in the same physical condition and with all her ultra-si, which she demonstrated with pleasure in training.

Over the past year, the skater has matured in an amicable way, began to perceive music more deeply, and this was already evident in the short program "Frida", the only drawback of which could be considered only the color of the dress: the combination of red fabric with red hair color rarely works justified that on the catwalk of haute couture, that on the ice.

But this is a matter of taste, nothing more.

But in the free program, Sasha, as they say, took out everyone.

All other singles could equally qualify for the remaining third ticket, and Tuktamysheva's chances now look no less high than those of Kostornaya, Usacheva, Khromykh or Shcherbakova.

It hardly makes sense at the current stage to talk about whether Anna will be able to return at least one quadruple jump to the program and thereby strengthen her position as the reigning world champion and at the same time raise the perception of her program to a new level. The chances of this do not seem to be very high, and the reason for this is not so much a summer injury to the toe, but rather the changed proportions of the body. But the example of Maya Khromykh is fresh in my memory, who managed to perform two quads in an arbitrary last season at once, when very few people believed in the reality of such an option.

In general, if we regard the skating in Chelyabinsk as the first and very important stage of the Olympic season, namely, the demonstration of programs, it is just right to state: if the International Skating Union continues to develop the tradition of ice "Oscars", it is unlikely that anyone will get the prize for the most original and memorable production of the season. some of the Russians, whether they are singles, dancing or sports couples. The only possible contender may be perhaps Trusova, but only on condition of the same rental as the one that happened in Chelyabinsk.

Should we strive for program exclusivity at all?

The answer will be unequivocally yes when it comes to dancing.

There are no elements to stand out there, all leaders perform the same technical set, so the originality of the production acquires additional value.

It is no coincidence that when it comes to certain champions, the first thing that comes to mind is not the quality of skating, but the program.

In this regard, by the way, even the free dance of world champions Nikita Katsalapov and Victoria Sinitsina did not look like a 100% hit on the target in Chelyabinsk.

He, of course, was good, but if four-time world champions Gabriela Papadakis and Guillaume Sizeron, after a year and a half in public, manage to find a new style for themselves and this, in fact, will surprise this audience once again, Russian dancers will defend the position of the best couple in the world. hard.

In the remaining forms, the impression is always strongly tied to the performance of technical elements (first of all jumps), but here, too, competent "packaging" can become decisive.

That is why Tamara Moskvina always tried to embellish the programs of her couples with as many memorable "tricks" as possible.

Eteri Tutberidze with Tarasova and Morozov is now going about the same path, but for the performances to start playing really, they must be much more rolled in.

This also applies to singles. During the rentals, the question of which of the Russian guys would go to Oberstdorf at the end of September to get Russia a third ticket to Beijing was discussed with might and main. Although just right to think about it. And about whether there is at least one athlete in the national team who will not look like a weak link in the Olympic team tournament. Unfortunately, the applicants' speeches in Chelyabinsk did not give an answer to this question ...