"Alternative" Malango makes the joys of "the king" .. and heralds a "new Uyghur"

The Sharjah striker, the Congolese professional, Ben Malango, made the joy of the exciting victory in the "crazy" match between Sharjah and its guest Al-Wasl, the day before yesterday, in the third round of the ADNOC Professional League, where the "King" turned his two-goal delay into a three-point win, in which Malango played the main role by scoring my goal 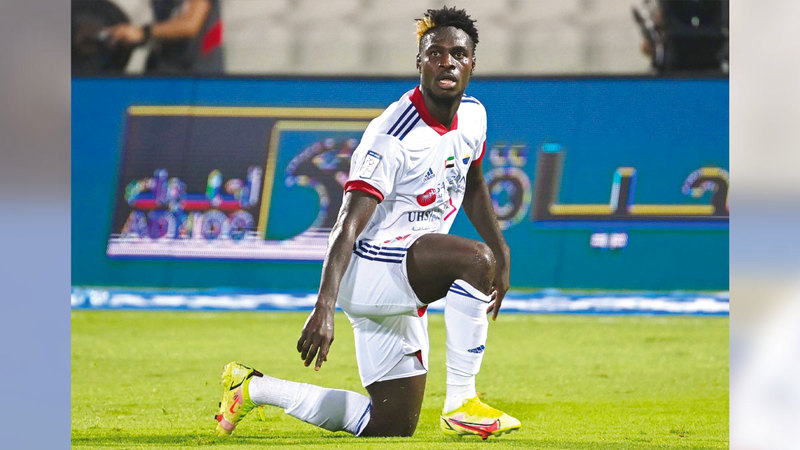 "Alternative" Malango makes the joys of "the king" .. and heralds a "new Uyghur"

Malango was behind the "Remontada" Sharjah in the Al Wasl meeting.

The Sharjah striker, the Congolese professional, Ben Malango, made the joy of the exciting victory in the "crazy" match between Sharjah and its guest Al-Wasl, the day before yesterday, in the third round of the ADNOC Professional League, where the "King" turned his two-goal delay into a three-point win, in which Malango played the main role by scoring My goal is to equalize and win.

Malango impressed everyone with his very high skills, attacking strength, accuracy and focus, which heralded the team with a "new Igor", with only two shots in the 30 minutes in which he scored the two goals.

It is noteworthy that the Brazilian Igor was the most prominent player in the team in the past years, and had a major role in the return of (the King) to the podium of the league title in the 2019 season, before moving before the current season to the Saudi Al Ittihad team.

Malango, 27, won the hearts of the Sharjah fans, after he scored two goals in a row in the 71st and 94th minutes, after entering a substitute in the second half, specifically in the 65th minute, instead of Khaled Al-Dhanhani.

And he began to look at Malango at first as an ordinary player and not a dangerous scorer who makes the difference at any time in the match, but what he did in the Al Wasl match changed all the scales.

In his first match against Kalba in the first round, he did not score any goal, but in the Al Dhafra match he scored the only winning goal, while he played a substitute against Al Wasl, where he finally returned from international participation with his country, but he excelled and scored two goals.

Malango, who is coming to Sharjah from the Moroccan club Raja Casablanca, is linked to a three-season contract, as he previously starred with Al Raja, and came to Sharjah last July as a replacement for the Brazilian Wilton Suarez, who left for his country permanently due to illness.

The Sharjah fans called Malango the "brown magician", as he and his Brazilian colleague Bernard Duraty formed an understanding duo, despite the short period they gathered in the ranks of Sharjah this season.

Malango has raised his goals so far to three, contending with the top scorer in the league.

He scored his first goal against Al Dhafra in the second round of the league to lead the team to collect the three points after the match ended with Sharjah winning with a clean goal.

In the Al Wasl match, he appeared with great offensive capabilities as a dangerous scorer who knows his way to the net well in the most difficult circumstances and times.

Malango had said in previous statements that he had “achieved almost all the tournaments he played for in clubs, from Congolese TP Mazembe to Raja Casablanca, and I am now in a new challenge and new tournaments that I want to get, and in football it always remains my goal to get the largest number of trophies.” And titles with the clubs I play for.”

Malango began his professional career with Congolese club Don Bosco before moving to TP Mazembe in 2016, with whom he played distinguished seasons, and won the African Confederation Cup in 2017, and won the title of top scorer in the tournament along with the gold medal. Which was the top scorer in the 2016-2017 season.

This brilliance opened the door to professionalism for him to Moroccan Raja Casablanca, which he moved to in 2019 to lead him to win the Moroccan League title in 2019-2020. She has 42 goals.

• He played about 30 minutes in the Al Wasl match and scored two goals with two shots.

• He has three goals so far, including the goal of beating Al Dhafra, and two goals that led Sharjah to beat Al Wasl.

■ Nationality: Democratic Republic of the Congo.

■ He has been playing for the Congo national team since 2017.