Successful transformation! They opened a new chapter in their lives in a brand new "competition field"

Chinanews client, Beijing, September 7th (Xingchen Liu) The highest podium that symbolizes infinite honor stands on. This may be what every athlete is looking forward to. But the cruelty of competitive sports lies in the fact that even if it used to smash the arena and its pride, it was ultimately no match for the "erosion" of the years and turned away.   On September 6, Ding Ning, a famous Chi 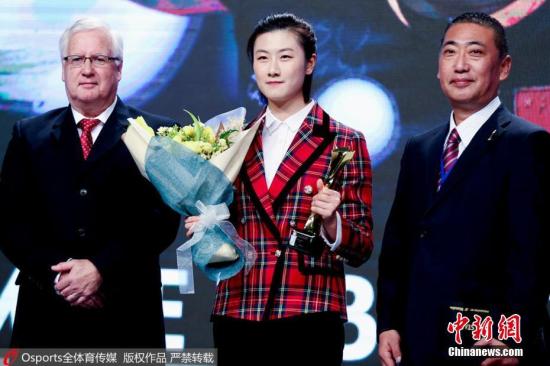 Chinanews client, Beijing, September 7th (Xingchen Liu) The highest podium that symbolizes infinite honor stands on. This may be what every athlete is looking forward to.

But the cruelty of competitive sports lies in the fact that even if it used to smash the arena and its pride, it was ultimately no match for the "erosion" of the years and turned away.

After removing her status as a professional athlete, she chose to go to Peking University for further studies.

What new outlets will the athletes have after they retire?

Data map: The 2018 ITTF Star Awards Ceremony was announced in Incheon, South Korea. Ding Ning, who led the Chinese women's team to the top of the Team World Cup and Team World Championships and won the gold medal in the Women's Singles World Cup, won the honor of the best female athlete of the year for the fourth time.

Enter the campus to continue your studies

In fact, Ding Ning's choice has become a representative of some athletes.

Due to the daily devotion to training and competitions of all sizes, the time professional athletes spend studying at the desk has been compressed a lot.

So, after finishing their careers as athletes, many of them chose to return to campus to continue their studies.

From Deng Yaping went to Cambridge University to study for a PhD in economics, to Liu Guoliang entered Shanghai Jiao Tong University to study human resource management; from Deng Linlin was recommended to the School of International Relations of Peking University, to Liu Xiang became a doctoral student at East China Normal University; and recently chose to pursue a master’s degree in physical education Ding Ning, more and more sports athletes regained the youthful campus life after leaving the stadium.

Whether it is an Olympic champion or a veteran who has been on the field for many years, they have already been branded by sports.

Although they are no longer athletes, they are destined to be accompanied by their respective passions. From grassroots coaches to professional team coaches, most of them took up the coach to make a successful transition.

She started playing at the age of 7 and won 24 world championships in her career, but her story with table tennis is not over.

After some exploration, she decided to devote herself to the youth table tennis business, focusing on the promotion of sports culture and building an interactive platform for youth education.

From the establishment of the "Small Ball Love" charity plan to becoming the head of operation of the Weihai Nanhai National Table Tennis Training Base, Wang Nan is committed to making table tennis "start from a baby".

In the men's 50-meter rifle three-position final at the Tokyo Olympics, "post-00s" teenager Zhang Changhong broke the world record and Olympic record with a 466 ring and successfully won the championship.

39-year-old Du Li hugged his disciple after the game, and his excitement was beyond words.

"I used to be an athlete and played by myself. This is the first time I participated in the Olympics as a coach. I didn't expect my team members to stand on the highest podium," Du Li said with pride.

The first gold of the Chinese delegation was shot in the Athens Olympics, and the Beijing and Rio Olympics continued their efforts. Du Li's career as an athlete was accompanied by honors.

After retiring, Du Li entered the national team as a coach.

She said frankly that being a coach is like a parent, seeing her children grow step by step, she feels very fulfilled.

Served as the project leader in charge

During the athlete period, Yao Ming became synonymous with Chinese basketball and even Chinese sports.

And he did not leave the basketball career, but also eager to use his own way to lead Chinese basketball to make greater achievements in the international arena.

Yao Ming vigorously promoted the reform of the CBA league, adjusted foreign aid policies, and established the concept of "big national team". After retiring, he has been working hard.

Test the waters of the commercial market

Athletes have accumulated a large number of sports contacts in their careers. Among them, many people have chosen to test the waters of the commercial market after retiring.

Figure skating star Pang Qing and Tong Jian founded the figure skating app. The "ice lovers" who have been on the field for 22 years continue to promote the ice and snow career; in 2013, gymnast Chen Yibing ended his 24 years of professional career, and he became a sportsman. The chairman of the company provides services for nationally certified fitness coaches.

The most successful transition from sports to business is the former gymnastics champion Li Ning.

The "Li Ning" brand that he founded has become well-known everywhere, and he has also become a leader in the successful transformation of the commercial market from the sports world.

Data map: Guoyu Meritorious Captain Cai Yun participated in the recording of the program for the picture

Compared with traditional commentators, retired athletes are well versed in their respective events and can tell the audience the story behind the stadium based on their own game experience. Many people have chosen to talk about it in the commentary post.

While the athletes fought for honor on the field, they also gained a lot of attention from the outside world.

After retiring, it is also a good strategy to enter the entertainment circle and pass on positive sports energy through more activities.

In the 2000 Sydney Olympics, diving athlete Tian Liangyi became popular for "jumping". His handsome appearance made him deeply loved by the public.

At the Athens Olympics, he won the double 10-meter platform championship. In 2007, he officially announced his retirement.

After that, Tian Liang transformed into the entertainment industry.

From starring in various themes of movies to appearing in variety shows, he almost created a precedent for retired athletes to enter the entertainment circle.

From the gymnasts Li Xiaopeng and Yang Wei, to the "Chinese trapeze" Liu Xiang, and then to the former "Tennis Sister" Li Na, after retiring, the athletes began to choose to tell the story between sports and sports through the lens to show the audience the other side. At the same time, it is also working hard to further promote sports.