In the shadow of Semenya, reclassified runners in the Diamond League won

Caster Semenya lost the battle to run his favorite distance 800 meters due to too high innate testosterone levels. In the shadow of her struggle, two other reclassified runners won their disciplines in the Brussels Diamond League competition. - From a physiological point of view, the rule is very strange. I think it works in all other branches as well, says the Doping Commission's chairman Åke Andrén Sandberg to SVT Sport. 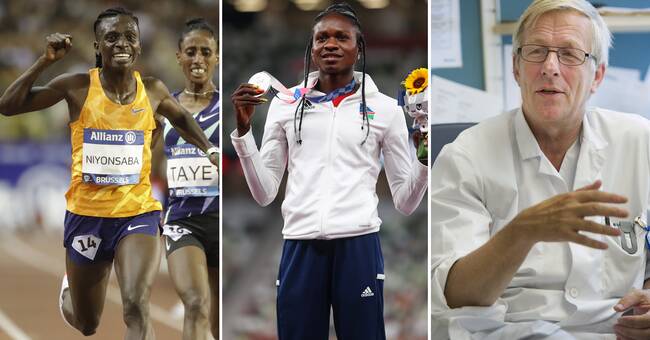 Like Semenya, they are banned by the International Athletics Federation, World Athletics, from competing on distances between 400 and 1609 meters (one mile) because they have too high innate testosterone levels.

Andrén Sandberg is critical of World Athletics' actions and that they have been looking for Semenya and adapted the regulations accordingly.

- That you would only have advantages of 400 to 1609 meters sounds very unlikely, but that was what they had investigated because that was where Caster Semenya ravaged.

It is a rule that is based on her, but I can not imagine anything other than that you have the benefit of testosterone in all other branches as well, says Andrén Sandberg.

What do you think the development will be if reclassified active people become successful in other branches?

- Then you can continue to set up bans in the other branches also until they jump to the next branch.

There is a very high risk of stopping active people in branches in which they are successful, Andrén Sandberg believes, even though he sees the dilemma in that women who lack testosterone have no chance in the fight against the hyperandrogens that the term is called.

On the other hand, sport is unfair where, for example, tall volleyball and basketball players have advantages and Åke Andrén Sandberg will think of the tennis legend Björn Borg.

- Right now you can measure testosterone.

but if you could measure some subject that made Björn Borg so good, would you stop him then?

Andrén Sandberg asks himself and adds:

- The more you know about genetics, the more complicated the rules become.

Francine Niyonsaba was the step behind Semenya during her 800-meter career and unlike the South African, she has made a successful switch to longer distances and won in the Diamond League in both 3000 and 5000 meters in very fast times.

- I still do not know if I like longer distances than 800 meters but I like the challenge.

I do not want to think so much about it because that is what it is, Niyonsaba says to the organizer after the gala in Brussels after his 14.25,34.

Christine Mboma made a sensation in the 400 meters this summer and ran 48.54.

At a training camp in Italy, World Athletics tested her and teammate Beatrice Masilingi, also 400 meters (did 49.53) and born in 2003 and measured too high testosterone levels.

As a result, World Athletics crossed the time of 48.54 and Mboma is now in the official statistics of 49.22, which she did as a 17-year-old last spring before she was tested.

They, “Namibia's golden girls, then had to run 200 meters at the Olympics in Tokyo after being stopped from the favorite distance.

Mboma took silver at the Olympics and won his first DL competition in the super time of 21.84.

Despite the regulations, she sees a future of 400 meters.

- Right now I focus on 200 meters but in the future I hope to run faster at 400 meters, says the Namibian.