The ceremony of crowning Al-Ahly youth in the “Emirates Cup” for handball, September 18th

The Handball Federation has set September 18 as the date for holding the official coronation ceremony for the Shabab Al-Ahly team in the Emirates Cup for last season, after the match between the Knights of the Hand and Dibba Al-Hisn in the second round of the General League Championship for the new season.The decision of the Game Federation to hold a ceremony 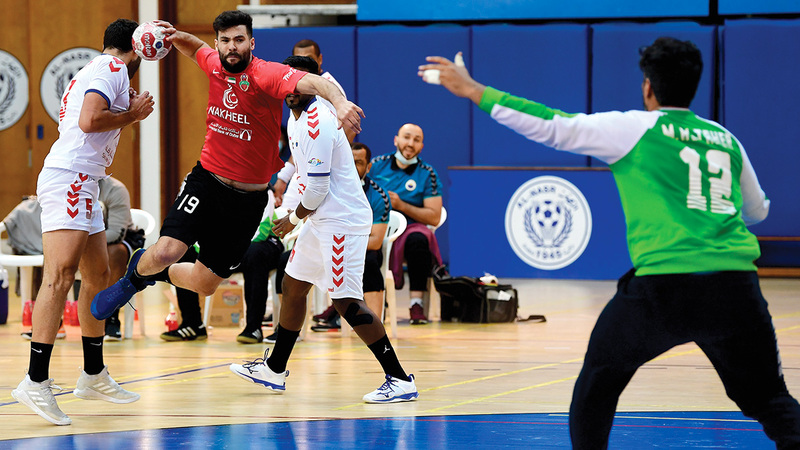 The ceremony of crowning Al-Ahly youth in the “Emirates Cup” for handball, September 18th

From the Al-Ahly and Sharjah youth meeting last January at the end of the Emirates Cup final round.

The Handball Federation has set September 18 as the date for holding the official coronation ceremony for the Shabab Al-Ahly team in the Emirates Cup last season, after the match between the Knights of the Hand and Dibba Al-Hisn in the second round of the General League Championship for the new season.

The decision of the Game Association to hold a coronation ceremony for the Al-Ahly youth club team, to put an end to the issue that has occupied the sports street, since the crowning of Sharjah with the “Emirates Cup” despite losing to Al-Ahly youth by “24-25” at the end of the final round of the championship, especially After the end of the tournament, the Al-Ahly youth administration turned to the Sports Arbitration Council, which last March issued its decision regarding Case No. (112) for the year 2021, confirming the victory of the “Knights of the Hand” over Al-Ain in the opening of the final round “29-22”, and the consequent results Results, in a decision that canceled the federal penalty applied by the Game Association, considering Al-Ahly youth lost in front of Al-Ain with a score of “10-0” for violating the registration regulations.

For his part, the Executive Director of the Collective Games Management Sector at Al-Ahly Youth Club, Dr. Majid Sultan, valued the decision of the Hand Federation, and Sultan said in a press statement: “I thank the Game Association for responding to the desire of Al-Ahly youth, especially since the hand team has the right to be crowned with the image.” worthy of heroes.”

He explained: "The Department of Team Games rejected the previous decision of the Hand Federation that Al-Ahly youth be crowned with the (Emirates Cup) during the (Super Cup) match that takes place next Thursday and the gathering of Sharjah and Al Jazeera, with our insistence that the (hand knights) be given their right to receive the appropriate honors and coronation, I thank the Game Association for its cooperation, by issuing the new decision, that the “Knights of the Hand” will be crowned on the grounds of their club’s hall on September 18, after the team’s match against Dibba Al-Hisn in the second round of the new season’s league championship.

Maliha dedicates the knot on the link

Maliha continued, for the second season in a row, to dedicate the knot to Al-Wasl, with the achievement of Maliha's men and on the grounds of their club hall, their third victory in a row at the expense of the "Emperor", the day before yesterday, and it came with a result of "26-24", in a meeting that brought the two teams together for the conclusion of the first round. From the league of the new season 2021-2022, which also witnessed the victory of Al-Jazira against its host Dibba Al-Hisn by “25-17”.

Maliha succeeded in confirming the height of his heels in the Al-Wasl meetings, after Maliha won the back and forth league last season by "35-31" and "34-19" respectively, especially since the hosts started the opening of their new season's league, with the same preference, after a half. The first ended with a difference of three goals, with a result of "14-11", and in the second half they managed to maintain the difference and decided the result of the match "26-24".

In turn, Al Jazeera imposed its absolute preference over the course of its meeting against Dibba Al-Hisn, after the first half ended by the players of "Pride of Abu Dhabi" by three goals and by "12-9", and a second half during which they knew how to expand the goal difference and resolve the match result "25-17".

The opening round, which began last Friday evening, in two confrontations, in which he knew how to beat Shabab Al-Ahly by two goals, with a result of "25-23", and Al Ain scored the most prominent result by defeating Al-Nasr "37-27".

At the end of the round, Al Ain topped the general standings with three points, with a goal difference from Al Jazira, Maliha and Sharjah.