The national football team lost the first two points at the start of its campaign in the decisive round of the Asian qualifiers for the 2022 World Cup, after a 0-0 draw with Lebanon, during the confrontation that brought them together the day before yesterday, at Zabeel Stadium in Al Wasl Club in Dubai, in the first round for the account of the 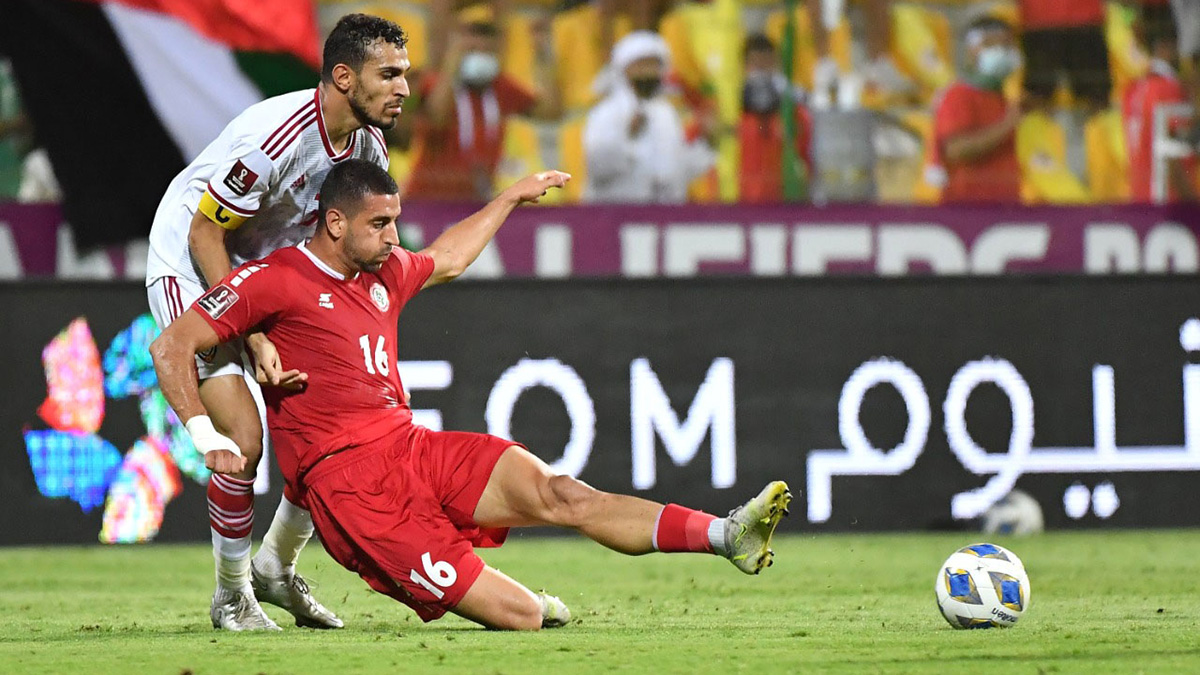 The national football team lost the first two points at the start of its campaign in the decisive round of the Asian qualifiers for the 2022 World Cup, after a 0-0 draw with Lebanon, during the confrontation that brought them together the day before yesterday, at Zabeel Stadium in Al Wasl Club in Dubai, in the first round for the first group account. .

Over the course of the two halves of the match, Al-Abyad failed to reach the goal of the Lebanese team and scored, despite the many opportunities that its players had. Including three for striker Ali Mabkhout in the minutes (18, 33 and 64), two chances for Cayo Canedo (40 and 47), another for Shaheen Abdel Rahman (41) and a seventh chance missed by Fabio de Lima (84), in addition to that the team missed the final touch to reach the brilliant Lebanon goalkeeper Mustafa Matar, In addition to the absence of solutions by coach Marvik, although the team was the best and the most controlling of the field and possession of the ball throughout the two halves of the meeting, in addition to the absence of another striker besides Mabkhout and Caio, who plays various roles and tasks on the field, including exploiting cross balls and turning them into goals .The team urgently needed to win this match to give a great moral boost to the players at the beginning of their career in the decisive role, especially since the team played the match on its home ground and in the midst of an audience, noting that the number of public attendance in the stands amounted to 1,513 fans.

Although the Al-Abyad attack was the most dominant in the match and dominated the game, it failed to score any goal, and Ali Mabkhout, Caio Canedo, Fabio de Lima and defender Shaheen Abdel Rahman competed in wasting opportunities wholesale, which was enough for the team to score a festival of goals in the Lebanese goal.

Coach Marvik tried to save the situation in the second half, after he felt the danger, and he actually made four substitutions with the entry of Abdullah Ramadan, Khalfan Mubarak, Tahnoun Al Zaabi and Khalifa Al Hammadi, but some of them came too late, and these substitutions were not feasible, and everyone expected to start Abdullah Ramadan, the match with a developed technical level and great field experience in dealing with such a match from the beginning, did not keep him on the bench, but Marvik preferred to push the starting lineup with the young player Abdullah Ahmed Al-Menhali, who is participating for the first time in a major international match.

The national team paid a heavy price by squandering the points of this match, which was an opportunity for it, as it was a strong and serious start to enhance its chances of qualifying for the World Cup.

For his part, the former Olympic team coach, the current assistant coach of Khorfakkan, Abdul Majeed Al-Nimr, confirmed to "Emirates Today" that "the team was not bad in the match, but everyone agrees that he missed the final touch," adding: "The team's offensive intensity should have been increased, I don't know." The conditions of the players, but Khalfan Mubarak should have been behind the attackers, and he should have been pushed at the beginning of the second half.” He continued, "Abdullah Ramadan should have also been involved from the beginning, as he was one of the best players in the national team in the last stage, along with the player Mohamed Gomaa, whose presence on the field could make a difference."

He concluded, "There were many wasted chances for the team in the match, and a change had to be made in the midfield, especially in terms of the players of the three axes, in addition to that Caio should have been replaced at the beginning of the second half because he was not successful in the match."

1- Wasting 7 sure chances during the two halves of the match.

2- The absence of the final touch, especially by Mabkhout and Caillou in the front line.

3- The substitutions made by Marvik with two players entering to save the situation came late, and were not feasible.

4- The absence of another striker in the front line supports Mabkhout and Caio in exploiting the crosses.

• The team missed 7 chances in front of the Lebanese goal, three of them for striker Ali Mabkhout.

• Al-Abyad lacked another striker besides Mabkhout, and Caio plays different roles and tasks.