Unexpected departure of Khachanov, victories of Karatsev and Pavlyuchenkova: how was the second day of the US Open

Karen Khachanov for the third time in his career was unable to overcome the barrier of the first round of the US Open. He missed Lloyd Harris and lost in the fifth of his last seven five-set career matches. In turn, Aslan Karatsev won the first victory in the main draw of the American Grand Slam tournament, and Anastasia Pavlyuchenkova overcame the owner of the courts Alison Risk in 80 minutes. At the same time, Novak Djokovic broke Holger's resistance to Rune, but remained dissatisfied with the behavior of the fans. 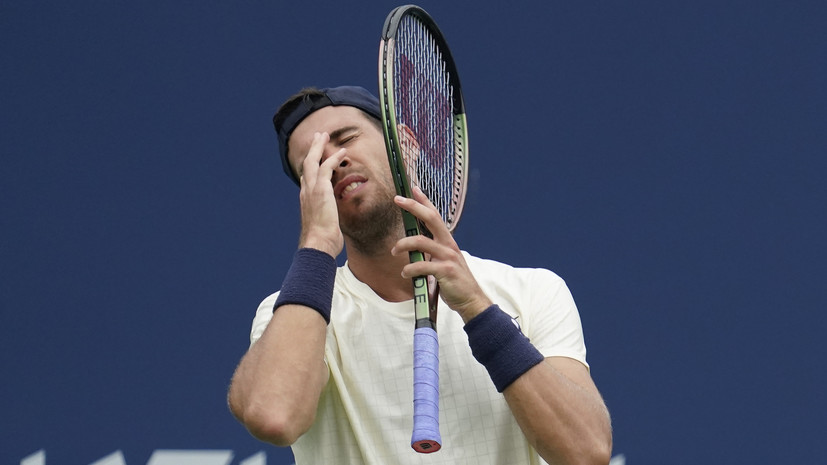 The collapse of Khachanov and the departure of seeded tennis players

The second day of the US Open tennis championship was remembered for a number of sensational results.

But for domestic fans, the most unexpected thing was the departure of the current Olympic finalist Karen Khachanov.

It has long been known that the Russian performs unsuccessfully at Grand Slam tournaments.

And if on the conditional Roland Garros and Wimbledon he reached the quarterfinals, then on the two remaining ones he did not go beyond the third round.

At the same time, Khachanov had the hardest time at the US Open.

To date, he has played 13 times on the Flushing Meadows courts and only won eight times (61.5%).

Unfortunately, he did not manage to improve the statistics in New York on the reporting evening.

Yes, he was a little unlucky with the draw, which immediately determined him to be Lloyd Harris's opponents.

The 24-year-old South African has never won an ATP tournament, but has made it to the finals twice.

True, in them he invariably lost to the Russians.

In Adelaide he lost to Andrei Rublev, and in Dubai - to Aslan Karatsev.

On paper, everything went to the fact that the series will continue in the United States, but in reality it turned out differently.

Khachanov immediately lost the first set, but the next two remained behind him.

Moreover, in the second, even the extremely low percentage of the first serve (45%) and the small number of actively won goals (four) did not prevent the Russian.

Harris made a lot of mistakes (16: 5) and literally gave his opponent a ticket to the second round.

However, in the fourth game in Karen's game, something broke. Serving problems began again, nervousness appeared and, importantly, the Russian sagged noticeably at the reception. If in the previous two sets he won at least 40% of the points, then in this he was content with only 26%. As a result, Khachanov did not earn a single break point, while he himself gave his opponent three opportunities at once. And one of them Harris implemented.

The clarification of the attitude reached the decisive game, in which Khachanov traditionally does not look very confident. And this match was no exception. 12 unforced errors with only five actively won balls, as well as colossal problems at the reception of the first serve (1 of 13) led to a defeat with a score of 4: 6, 6: 1, 6: 4, 3: 6, 2: 6. Thus, another tendency was confirmed, according to which Karen feels insecure in protracted confrontations. Suffice it to say that he won just two of the last seven five sets.

Thus, the finalist of the Tokyo Olympics lost for the third time in the first round of the US Open.

It is noteworthy that this happens to him steadily in odd years.

In 2017, he could not cope with the Taiwanese-born Liu Yansun, and in 2019 with the Canadian Vashek Pospisil.

In the past, he miraculously overcame the barrier in the person of the Italian Yannick Sinner, surviving the tie-break in the fifth game.

It is noteworthy that simultaneously with Khachanov, his opponent in the semifinals of the Games in Tokyo suffered a defeat.

Pablo Carreno-Busta won the first two sets, and subsequently had four match points, but still lost to the 151st racket of the world, Maxime Cressy.

This meeting was one of five in the first round that ended in a tie-break in the fifth set, which helped to set the tournament record.

In addition to the Spaniard, Fabio Fognini, Marton Fuchovic, Jiri Vesely and Gianluca Mager did not cope with the pressure.

Karatsev's success and losses in the women's grid

As for the rest of the Russians, their performance was also not ideal.

Of the seven tennis players, only four managed to go further.

One of them was Aslan Karatsev, who made his debut in the main draw of the US Open.

To date, his best achievement has been reaching the third qualifying round, in which he was unable to cope with the then 35-year-old Michael Berrer.

And this time the Russian had a hard time. Despite the fact that his fight with Jaume Munyar lasted for four sets, he spent only a minute less than Khachanov on the court (3 hours 9 minutes). And for this, Karatsev has much to blame himself. Yes, he traditionally attacked extremely sharply, which is confirmed by 57 actively won goals. The trouble is that there were just as many unforced errors, and that's not counting nine doubles. However, the class difference was too great. As a result, 5: 7, 6: 1, 6: 3, 6: 2 in favor of Aslan, who will face off against Jordan Thompson in the second round.

Anastasia Pavlyuchenkova and Lyudmila Samsonova stepped much more confidently into the next round.

The Olympic champion in mixed doubles in just 80 minutes dealt with the owner of the courts Alison Risk, allowing her to win only six games - 6: 4, 6: 2.

It took her compatriot even less time to break the resistance of Briton Katie Boulter - 6: 3, 6: 2.

At the same time, Varvara Gracheva took over Nuria Parisas-Diaz.

In the second round, Pavlyuchenkova will meet with Anna Karolina Shmidlova, who made her way through the qualification, and Samsonova - with Greta Minnen.

The hardest of all will have to Gracheva, who got the 24th seeded competition - the Spaniard Paula Badosa.

At the same time, three Russian women at once could not break into the second round of the competition.

And if it was hard to believe in the success of Vera Zvonareva and Anastasia Potapova, because they were opposed by the first racket of the world Ashley Barty and the strong American Jessica Pegula, then they expected more from Veronica Kudermetova.

For two sets, she competed on equal terms with Sorana Kyrstey, but in the third she fell apart.

A native of Kazan, she won only a third of the points on her serve and only one on the reception, and even then thanks to a double error of her opponent.

Thus, the first round of the US Open remained an impregnable barrier for her.

Previously, she twice tried to break into the second, but both times she stumbled.

Djokovic's suspicions and Imer's dispute with the judge

Another day of the US Open was not without conflict situations. One of these arose in a match between Mikael Ymer and Jenson Brooksby. In the middle of the second set, the Swede lost the rally and broke his racket in his hearts, for which he was punished by the first warning. He took a break, during which he replaced the broken inventory, found the vibration damper that had fallen out and wiped his hands, as a result of which, as expected, he did not meet the 25 seconds allotted for serving. For this, the chief judge Carlos Bernardes punished him again. The verdict caused bewilderment among the tennis player, who began to argue with the referee and demand to call the supervisor, but he only wrote him a penalty point.

Ymer, albeit in a rather harsh manner, tried to explain that the delay was caused by an injury to his hand. According to him, one of the fragments of the racket hit him in the palm, which made him go for a towel. However, the judge was not convinced by these arguments. In order to sort out the incident, a supervisor came to court, but the conflict only worsened. Mikael did not agree with the position of Bernardes and accused him of lying, simultaneously refusing to continue the meeting. As a result, only the threat of canceling the match forced the Swede to continue, but he did not succeed. Brooksby, 20, won four sets and moved on.

In turn, Novak Djokovic was annoyed by the behavior of the fans during the match with Holger Rune.

Throughout its entire course, the fans loudly supported the 18-year-old Dane, who had been fighting for more than two hours with the first racket of the world.

At a press conference, Djokovic called the atmosphere on the New York courts imperfect and especially drew attention to the chants in support of Rune.

According to the Serb, he did not understand what the fans were shouting.

And initially it seemed to him that they were just buzzing with displeasure at him.