"Gold would not surprise anyone." So said SVT Sports expert Lotta Björe before the European Championships in jumping - and Sweden has got a perfect start to the championship. Sweden leads the team competition - in addition, Peder Fredricson is second individually. - It was a good start for me and for the team today, says Fredricson to SVT Sport. 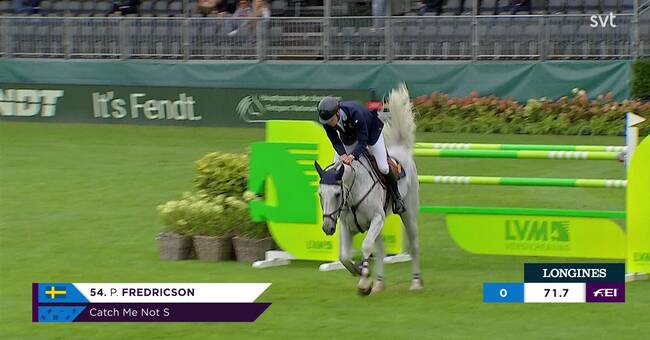 Peder Fredricson is the only rider in the Swedish team who participated and won Olympic gold.

Now during the European Championships, the golden horse All In gets a rest - instead he competes on Catch Me Not S. "Charlie", as the horse is called, makes just like other Swedish horses championship debut.

All Swedes are flawless

Much of the talk before the European Championships has been about Peder Fredricson's favorite.

And after the first three Swedes rode flawlessly, it was the Olympic gold medalist's turn.

Fredricson struck with a new flawless round and took Sweden to the top of the team competition.

The 49-year-old was also in the lead until the next last rider, home jumper David Will.

The German was barely a second faster than Fredricson.

- It was a very good start for me and for the team today, Fredricson states afterwards.

And it is Swedish also in third place through Douglas Lindelöw.

The 30-year-old was part, together with Fredricson, in the Swedish team that took silver at the European Championships in Gothenburg 2017.

- I got to the pitch very well, it was enough for a quick time.

It is a good feeling when it goes fast without it feeling fast.

I have a better starting position than I had before at the European Championships, it will be fun to continue, Lindelöw says to SVT Sport.