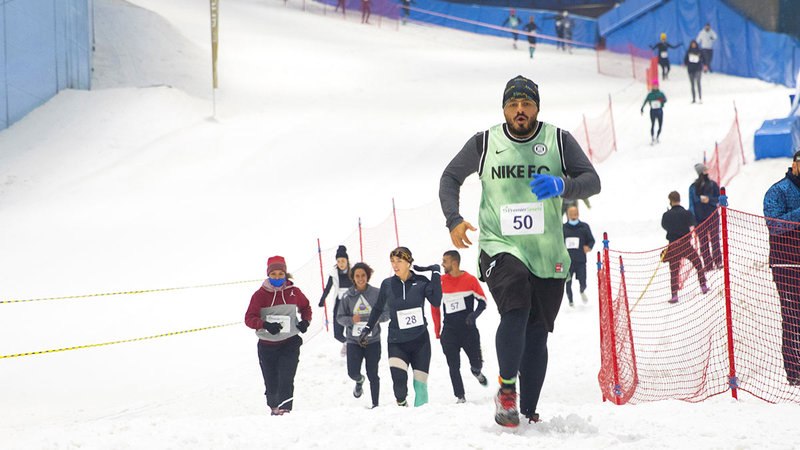 An increase of 33% over last year

From the activities of the last edition of the Dubai Snow Run.

A statement issued by the Dubai Sports Council said that this year's edition will witness an increase in the number of participants in the race by up to 33%, as 400 contestants will be allowed to participate, pointing out that the last edition was limited to the participation of 300 people, in implementation of the precautionary measures and the protocol for the events.

The statement added: "This increase comes as a result of the successful implementation of the precautionary measures and the protocol, which resulted in a streamlining of organizing the first edition, and the absence of any injuries, and due to the increased demand for participation in this event from various nationalities."

The Dubai Sports Council explained that “registration in the race will include two categories, the first extending for a distance of three kilometers, and the second will be for a distance of five kilometers, and the door for participation will be open to all groups of society of all nationalities from inside and outside the country, starting from 16 years and above, to participate in this race.” .

The Dubai Sports Council considered that the Dubai Snow Run contributes to promoting sports tourism in Dubai by providing a wonderful and unprecedented experience for running on snow in summer time, which provides an opportunity for residents and visitors to participate in the snowy weather that reaches the temperature. It is less than four degrees below zero.

The statement stated that snow sports are among the main sports on the council's agenda, and its officials are keen to cooperate with various parties to organize more such events for different nationalities, as well as for people of determination, and to spread this sport among the people of the country.

The Council, in cooperation with Majid Al Futtaim, developed an integrated program to organize many snow events and competitions until the end of the year, as the Council announced a list of programs and snow sports events on its annual agenda, which amounted to 13 annual events held in Ski Dubai according to precautionary measures and prevention methods. .