27 fights in the Emirates Warriors Championship 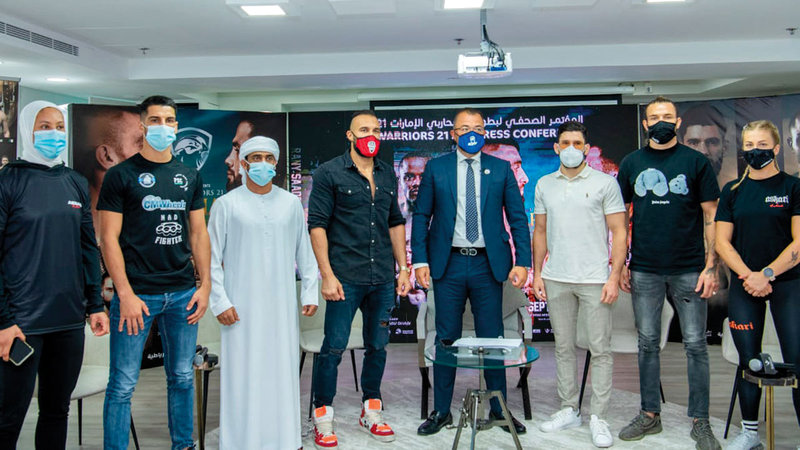 4 fighters from the Emirates are participating..Yahya is looking forward to the first titles

27 fights in the Emirates Warriors Championship

Fouad Darwish and the fighters at the press conference the day before yesterday.

The committee revealed in a press conference held the day before yesterday in Abu Dhabi, in the presence of the CEO of Palms Sports Company, Chairman of the Organizing Committee Fouad Darwish, and a number of fighters, through which he announced the completion of all preparations for the launch of the event, and the completion of all fighters’ arrival in Abu Dhabi, and their submission to all required precautionary measures. from the competent authorities.

26 fighters will participate in the Arab version, including four from the Emirates, they are: Muhammad Yahya, Abdullah Muhammad Ali, Hadi Omar and Rashid Daoud, and the event is witnessing for the first time the competition for the championship title, where the Emirati champion Muhammad Yahya will compete with his French counterpart of Algerian origin, Yazid Al-Shoushani, in the weight Lightweight, while the second Kuwaiti President Abdullah Boushahri and Moroccan Badreddine Diani will meet in the middleweight, and one fight for women combines Kuwaiti Iman Al-Madhaf and Moroccan Hasna Jaber.

As for the international version (22), it will witness 14 fights with the participation of 28 fighters. Among the most prominent battles is the main confrontation that brings together the German of Palestinian origin, Rani Saada, the former Bama champion in the rooster weight, and the American Sean Punch of the Bellator organization. The second president also witnesses an exciting meeting in the weight of The heavyweight between German Ricardo Parcel, former Chelsea goalkeeper, against the Russian Michael Maknatkin, the world champion in sambo, and in the women's competitions, the Canadian French Corinne Laframboise will face the rising Swedish Ellen Oberg.