Al-Qayed broadcasts joy from Tokyo..a new medal in the Paralympics

Yesterday, gold champion Mohammed Al-Qayed won the bronze medal in the 100-meter wheelchair race, giving the UAE its first medal at the "Tokyo 2020" Paralympic Games, which is currently being held in the Japanese capital until the fifth of next September, to raise the balance of the sport of people of determination. 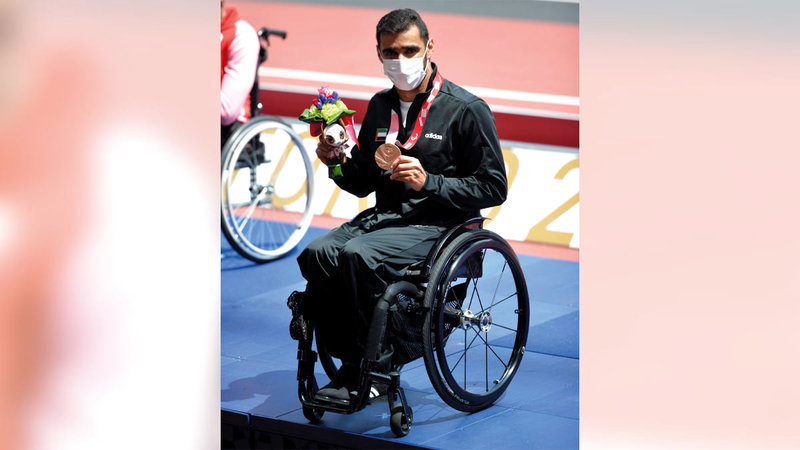 Bronze in the 100m wheelchair race

Al-Qayed broadcasts joy from Tokyo..a new medal in the Paralympics

Champion Mohamed Al-Qayed celebrates the bronze medal in the 100-meter race at "Tokyo 2020".

Yesterday, the gold champion, Mohammed Al-Qayed, won the bronze medal in the 100-meter wheelchair track race, giving the UAE its first medal in the "Tokyo 2020" Paralympic Games, currently held in the Japanese capital, until the fifth of next September. The participation in the Paralympic Games by four gold, 10 silver, and six bronze, since the first medal in the Sydney 2000 Games. On his personal level, Al-Qayed added the fourth medal in his Paralympic career, after winning the silver and bronze in the 800 and 100 meters races in the London 2012 Games, which He followed up with gold in the 800m in Rio de Janeiro 2016.

Al-Qayed's bronze is also the sixth in the history of Emirati athletes of determination in all participations in the Paralympic Games, in a record in which the state's athletes are celebrated with gold on four occasions, as in addition to the gold of Al-Qayed in the 800m, the march of the golden quarter Muhammad Khamis is celebrated by winning two gold medals, the first came In Athens 2004 in the weight of 97 kilograms, and the second in Rio de Janeiro 2016 in the weight of 88 kilograms, as Khamis had previously won silver in the 2008 Beijing Games.

The gold quartet complements the shooter Abdullah Sultan Al-Ariani, who was crowned in London 2012, before Al-Ariani added a new achievement in his career by grabbing three silver medals at once in Rio de Janeiro 2016.

In turn, women's sports succeeded in entering the historical records of the Paralympic Games, after the last Rio de Janeiro Games in 2016, recorded Sarah Al-Junaibi's achievement of the first Emirati women's medal in the history of the Games, by winning the bronze in the shot put competition in the "F33" category, before following The next day, the national team player, Sarah Al-Junaibi, won the silver in the shot put competition, but in the "F32" category.

Historically, the Emirati participation in the Paralympics began in 1992, in the Barcelona tournament, when Ali Saif Al-Dawla alone participated in the powerlifting, before the Atlanta tournament in 1996 witnessed the participation of five athletes without success, with Sydney 2000 bearing the first imprint, With the rise of the country's athletes to the podiums, they won four medals, including a silver and a bronze for Ahmed Saif Zaal, as the first Emirati athlete to be crowned with Paralympic medals, before Obaid Sbeit and Hamid Hassan Murad added the third and fourth silvers, all of which came in athletics competitions.

Harvest of Emirati sports for people of determination in the previous Paralympic Games:

Al-Qayed: A gift to the wise leadership and the people of the Emirates

He said in a press statement: "The competition was not easy due to the Corona pandemic, the preparation period, and the change of the wheelchair I used in the past four years, and I will work to double the effort in the remaining races in the Tokyo version to raise the country's flag high in the sky of Japan."

The latest achievements of our Paralympic champion Mohamed Al-Qayed were three medals in the 2019 World Championships in Athletics (gold, silver and bronze).

Mohammed Al Hamli, head of the UAE mission in Tokyo, thanked Sheikh Nahyan bin Mubarak Al Nahyan, Minister of Tolerance and Coexistence, for his communication with the mission in Japan and his keenness to congratulate them on Mohammed Al Qayed's achievement, noting that he was always keen to stand with people of determination and support them.

He said: "The achievements that have been achieved are the result of the wise leadership's unlimited support for people of determination, which had a positive impact on their path to ascend to the podiums."

Champion Ahmed Al Mutaiwee launches his participation today as the first Emirati of people of determination to participate in the “Paracycle” bike game in the Paralympic Games, when he competes with an elite of world champions in a “racing against the clock”.

Al-Mutaiwee aspires to gain experience and friction in this forum, especially as he has many achievements, as he was previously classified in the "C2 category" as an international player by the International Cycling Union.

• 20 medals won by the UAE in the history of the Paralympic Games.