Verstappen's victory, Mazepin's best lap and a three-hour pause due to rain: what did the Belgian Grand Prix in Formula 1 remember?

The 12th stage of the World Championship, the Belgian Grand Prix, took place in Formula 1. Due to heavy rain on the day of the race, the start had to be postponed for more than three hours, while the pilots drove only two laps behind the safety car. The winner was Max Verstappen, who had won the qualifier the previous day. Nikita Mazepin formally showed the best lap and became the third Russian to achieve this. 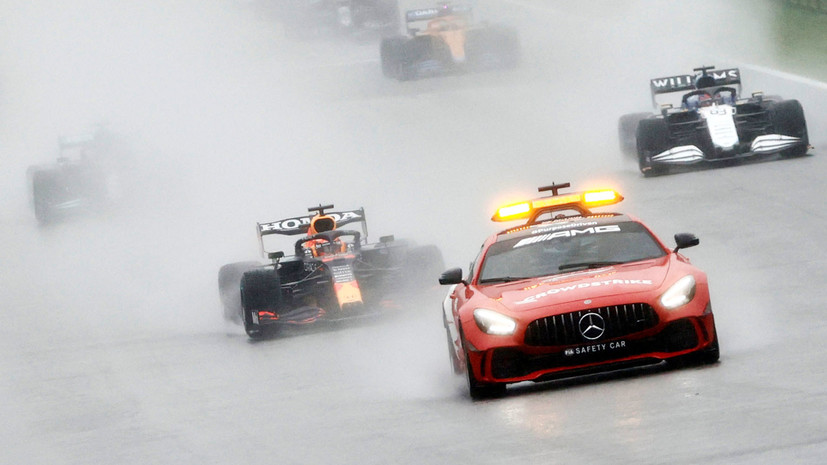 The Belgian Grand Prix always has a special place in the Formula 1 calendar.

Pilots often call the track "Spa-Francorchamps", where the race takes place, if not their favorite, then certainly the most interesting.

In terms of its average speed, it is second only to the autodrome in Monza, and the ever-unpredictable mountain weather necessarily makes adjustments to the conduct of races.

In Belgium this year also begins the second half of the World Championship, which still has 22 races.

The first gave the fans a lot of exciting events, the main of which was the intense struggle between Max Verstappen from Red Bull and seven-time winner of the season Lewis Hamilton from Mercedes.

If it were not for the huge number of accidents at the previous stage in Hungary, then it was the Dutch pilot and the Austrian team who would have come to Spa as the leaders of their tests.

For Verstappen, the track in Belgium is practically home.

He was born just an hour away from it, but until this year he had not won it or won the qualification.

Now he was ready to please the spectators gathered in the stands.

In the first Friday training session, held in unusually cold conditions for racing, the pilot of Red Bull showed the second time, losing only to Valtteri Bottas, who in Belgium was waiting for a five-place penalty for the incident at the Hungaroring.

For Hamilton, his first spa appearance this year was a flop.

Having driven only 17 laps, the British pilot ended up in the protocol as the neighbor of Russian Nikita Mazepin, who bypassed only Haas team-mate Mick Schumacher.

It rained before the second free practice session, but the track had time to dry before the Formula 1 pilots returned.

Verstappen this time overtook Bottas by 0.041 seconds, while Hamilton won only 0.072 seconds.

But the Dutchman did not have time to rejoice at the intermediate victory over Mercedes.

At the end of the training session, he lost control and crashed into a wall.

The mechanics managed to put Verstappen's car in order, and he left for the third free practice with all the other pilots.

On Saturday, the weather stopped sparing the riders and in the morning forced them to drive on the wet track on intermediate tires.

Many pilots, including Hamilton and Bottas, flew to the side of the road or turned around on the slippery asphalt.

Only the vice-leader of the world championship felt confident in such conditions.

Verstappen again headed the protocol, and now winning more than a second from Hamilton on the circle.

Almost the same amount lost to the Dutchman by his team-mate Sergio Perez, who took second place.

By qualifying, the rain did not even think to subside, and the fight for the pole position had to be postponed for a few minutes.

When the stewards finally gave permission to leave the boxes, one surprise after another began to occur on the track.

For a while, the protocol of the first session was headed by Williams drivers George Russell and Nicholas Latifi, who risked wearing intermediate tires instead of rain tires.

As a result, they both advanced to the next segment, with Lando Norris from McLaren taking the intermediate victory.

Verstappen was 0.416 seconds behind him.

In the second session, there was almost a sensation.

Hamilton and Bottas were not in the top ten for a long time, but they updated the tires in time and were able to avoid failure.

They both even left Verstappen behind, but were still inferior to Norris.

In the final round, the rain intensified, and it was Norris who became his first victim.

On the first lap, he crashed his car on the barrier and flew across the entire track - the Briton was very lucky that at that moment there was no one behind him.

The session had to be stopped in order to remove the debris and wait for more favorable conditions.

It was a dramatic Saturday at Spa, in our first qualifying session after the 2021 summer break ⏱

Watch highlights here - including this incident that Lando thankfully walked away from, and a battle for pole that was decided by 0.013s ⬇️ # BelgianGP 🇧🇪 # F1

When the rain stopped, Hamilton came out on top, but in the second attempt he was sensationally bypassed by Russell, and then Verstappen, who won the sixth qualification of the season.

It was pole at Spa for @ Max33Verstappen after a dramatic final flying lap!

On the day of the race, the weather continued to test the patience of the pilots.

Rain flooded the track throughout the day, and on the warm-up lap half an hour before the scheduled start, Perez flew off the road.

He broke the suspension and had to withdraw from the race, since it was impossible to restore the car in such a short time.

However, for the Mexican, everything worked out in the end.

Due to the incessant rainfall, the organizers had to constantly postpone the start of the race.

The danger was not so much puddles as low visibility at the circuit.

The pilots had to wait for three whole hours, until they and the fans, soaked to the skin, learned the good news - the Belgian Grand Prix would still be played out.

By that time, Perez's car had been restored, and he got a chance to start from the pit lane.

True, they did not succeed in taking full advantage of them.

The pilots drove only two laps behind the safety car, so that the race was formally considered to have taken place and at least half of the points could be distributed.

After that, red flags were again flown, and all the cars turned into the pits.

Interestingly, during this ride behind the safety car, Nikita Mazepin scored the best lap at his own expense.

As a result, this achievement, significant for Formula 1, remained with him, but did not bring half a point, since the Russian was not in the top ten.

Before him, Vitaly Petrov and Daniil Kvyat also showed the best circle once.

Verstappen was declared the winner of the race. With little or no effort, he reduced the league gap to Hamilton to three points. Next time in the Netherlands, it will be even easier for him to try to regain his leadership. Russell's runner-up meant that a Williams driver was on the podium for the first time since 2017.