Utrecht and Feyenoord rest with 1-1 after spectacle

Good afternoon and welcome to this live blog! My name is Jeroen van Barneveld and I will keep you informed about the four Sunday games in the Eredivisie. Eredivisie LIVE: FC Utrecht-Feyenoord  1-1 Program: 2.30 pm:  Ajax-Vitesse 2.30 pm:  Heracles Almelo-NEC 4.45 pm:  Heerenveen-AZ FC Utrecht-Feyenoord · in 2 days Captain Willem Janssen is thrilled after his equalizer deep in the first half a 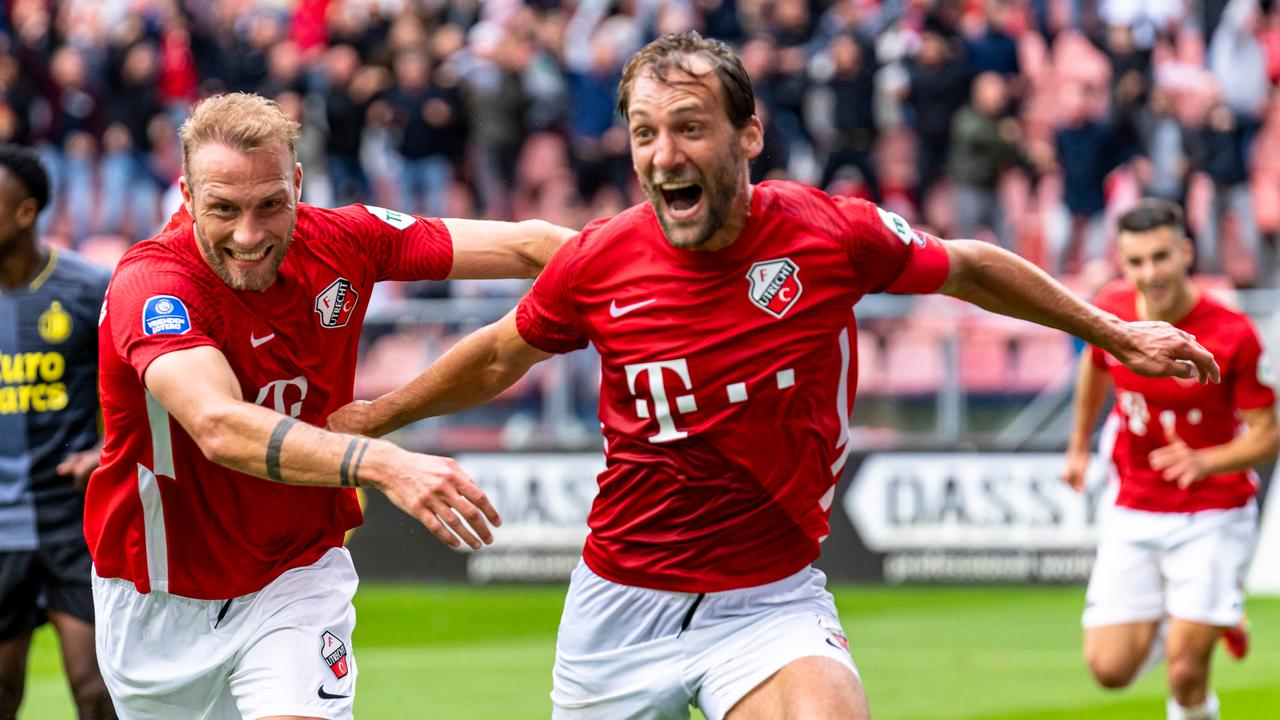 Captain Willem Janssen is thrilled after his equalizer deep in the first half against Feyenoord.

Mike van der Hoorn tries to fall into his arms.

There is never a dull moment in this edition of FC Utrecht-Feyenoord and that is also reflected in the score thanks to goals deep in the first half.

FC Utrecht has the better of the game and stacks chance after chance, but the return leaves a lot to be desired.

Incidentally, after seeing the images, referee Dennis Higler reverses a penalty kick for the home team.

On the stroke of half-time it is still equal in Utrecht and we can call that completely right.

The captain simply slides in for an empty goal.

Completely against the ratio Feyenoord takes the lead and that is entirely thanks to the individual class of Luis Sinisterra.

The Colombian left winger threatens, dribbles and then hits the short corner with his right leg.

FC Utrecht is presented with the bill for missing all those opportunities.

44 'Adam Maher is allowed to build up for the free kick of about 25 meters, but the FC Utrecht midfielder is certainly not convincing.

The weak bet is easy prey for goalkeeper Justin Bijlow.

42 'Referee Dennis Higler is clearly haggling in this match.

He now suddenly gives Tyrell Malacia a yellow card while Feyenoord's left back played the ball in a sliding tackle about 25 meters from Justin Bijlow's goal.

Higler has his business full on this duel.

36 'Anastasios Douvikas gets a dot of a chance on the opening goal on behalf of FC Utrecht.

After Alireza Jahanbakhsh loses the ball, the ball comes through Quinten Timber and Simon Gustafson into the feet of the Greek striker, who then shoots sky high.

He should have done more with that.

34 'Feyenoord is really lucky that it is not behind against FC Utrecht.

The home team has the better of the game and stacks chance after chance, but it is still 0-0 in Stadion Galgenwaard.

Trainer Arne Slot has to come up with a ruse.

There FC Utrecht is very close to the lead against FC Utrecht.

Quinten Timber cuts free after a corner kick that has been deflected and lashes out with his left leg.

Through the body of Luis Sinisterra the ball bounces on the outside of the post.

In the rebound Moussa misses Sylla for an empty goal, but he was also offside.

The first half hour of FC Utrecht-Feyenoord has passed and so far this is the most talked-about moment in Stadion Galgenwaard.

Referee Dennis Higler reverses a penalty for FC Utrecht after seeing the images.

It is only along the side that Higler sees Anastasios Douvikas kicking into thin air and not being knocked over by Tyrell Malacia.

27 'There is the first serious chance for Feyenoord.

Alireza Jahanbakhsh puts the ball on the edge of the penalty area neatly wide on the detached Orkün Kökçü and the Turkish midfielder immediately pulls the trigger.

FC Utrecht goalkeeper Maarten Paes has to stretch to tap the ball out of the corner.

26 'This is the game that FC Utrecht likes to play in matches against the clubs from the traditional top three: defending and breaking out with great speed.

For example, striker Anastasios Douvikas is hidden in the depths, but he still lacks some speed.

23 'Referee Dennis Higler has his hands full with this match, because now Mike van der Hoorn and Luis Sinisterra are fighting each other.

After a sermon by Higler, the emotions have calmed down a bit, but the sparks fly in this duel.

Feyenoord is having a particularly difficult time with FC Utrecht in the opening phase of the game in Stadion Galgenwaard.

The Rotterdammers have to watch patiently as the home team dictates the game and sets up one attack after another.

The formation of trainer Arne Slot has so far offered little in return.

Higler is convinced after seeing the images and still does not award a penalty to the home team.

The arbiter is then treated to a flute concert by Stadion Galgenwaard, where the images of the moment are shown on the big screen remarkably enough.

That has never been seen before.

14 'Referee Dennis Higler is called to the side by the VAR.

The video referee is also not convinced of a violation by Tyrell Malacia and a penalty for FC Utrecht and calls on Higler to watch the images.

What is happening here?

Anastasios Douvikas tries to lash out after a quick takeover and is slightly thrown off balance by Tyrell Malacia.

Higler thinks it's enough for a penalty, but that seems rather severely punished.

11 'It goes almost completely wrong there for Feyenoord and in particular Tyrell Malacia.

The left back plays the ball in his own penalty area without looking back at Luis Sinisterra and he had not counted on that at all.

With a good sliding, attacker Sinisterra prevents a dangerous situation.

Feyenoord is put with its back against the wall by FC Utrecht.

6 'FC Utrecht grabs Feyenoord by the throat from the kick-off, to the satisfaction of the fanatical public in Utrecht.

The team of trainer René Hake has not yet become really dangerous, especially because the passing is rather sloppy.

5 'There Feyenoord becomes dangerous for the first time in Stadium Galgenwaard.

After a flowing attack, the ball lands at the feet of Alireza Jahanbakhsh, who decides to give a cross to the strong Bryan Linssen.

Linssen does get his head against the ball, but he does not make an attempt on goal.

Besides, he was already offside.

After a beautiful show with fireworks and confetti, FC Utrecht-Feyenoord has started.

What does Feyenoord show in this first serious test in the Eredivisie?

After this match day, the Eredivisie will be suspended for two weeks due to the international match.

An important match for Feyenoord goalkeeper Justin Bijlow, who is mentioned by many as the new keeper of the Dutch national team.

The Orange squad of national coach Louis van Gaal will play the important World Cup qualifier against Norway on September 1.

The 28-year-old defender, who played with the Domstedelingen from 2012 to 2013, was recalled from Arminia Bielefeld this summer.

He forms a couple with captain Willem Janssen this afternoon.

Trainer René Hake confirms in front of the

that Gyrano Kerk will make a transfer in the last days of the transfer window and for that reason is not part of the match selection of FC Utrecht.

"There are some concrete things going on around him. I don't know exactly, but it is clear that it is concrete. I assume that he will leave."

Arne Slot explains why he chooses Ramon Hendriks to replace Marcos Senesi in the center of the defence.

"Ramon and Wouter Burger are both very close to each other, but for Wouter it is a position that he holds for the first time this season. We have chosen to leave everyone in his position."

that Robert Bozeník is on his way to Fortuna Düsseldorf.

"He is now undergoing a medical examination there. It is a good solution for him. He had a difficult season last year. I gave him the chance from the beginning, but I see that it is difficult for him. Then you have to be honest are to each other, and then I think the best solution is for him to go to a new environment and play a lot there. We hope to get him back better next year."

Feyenoord has started energetically under the new trainer Arne Slot, but today the first serious test for the Rotterdam team awaits in Utrecht.

FC Utrecht is traditionally a difficult opponent for the clubs from the traditional top three.

There are still transfer problems at Feyenoord.

That is why Robert Bozeník is missing in the selection of trainer Arne Slot.

The 21-year-old striker, who was taken over from MSK Zilina for €4 million last year, is said to be currently completing a rental transfer to Fortuna Düsseldorf.

At FC Utrecht, trainer René Hake has put his hand in the grab bag, because the position of the Domstedelingen has changed in no fewer than four places.

This is at the expense of Mark van der Maarel, Othman Boussaid, Adrián Dalmau and Gyrano Kerk.

Kerk is completely missing in the selection of FC Utrecht.

He would not be with the group due to transfer problems.

The line-up of Feyenoord is known and we see one change compared to last week's home game against Go Ahead Eagles (2-0).

Ramon Hendriks takes the place of the injured Marcos Senesi in the center back.

It is Sunday and that of course means that there are again matches in the Eredivisie on the program.

No complaints about the posters today.

These duels are on the program: