Good afternoon and welcome to this live blog! My name is Jeroen van Barneveld and I will keep you informed about the four Sunday games in the Eredivisie. Eredivisie Program: 4.45 pm:  Heerenveen-AZ Results: FC Utrecht-Feyenoord 3-1 Ajax-Vitesse 5-0 Heracles Almelo-NEC 0-1 Heerenveen-AZ 7 minutes ago Koopmeiners seems to be playing last game for AZ Teun Koopmeiners seems to be playing his last 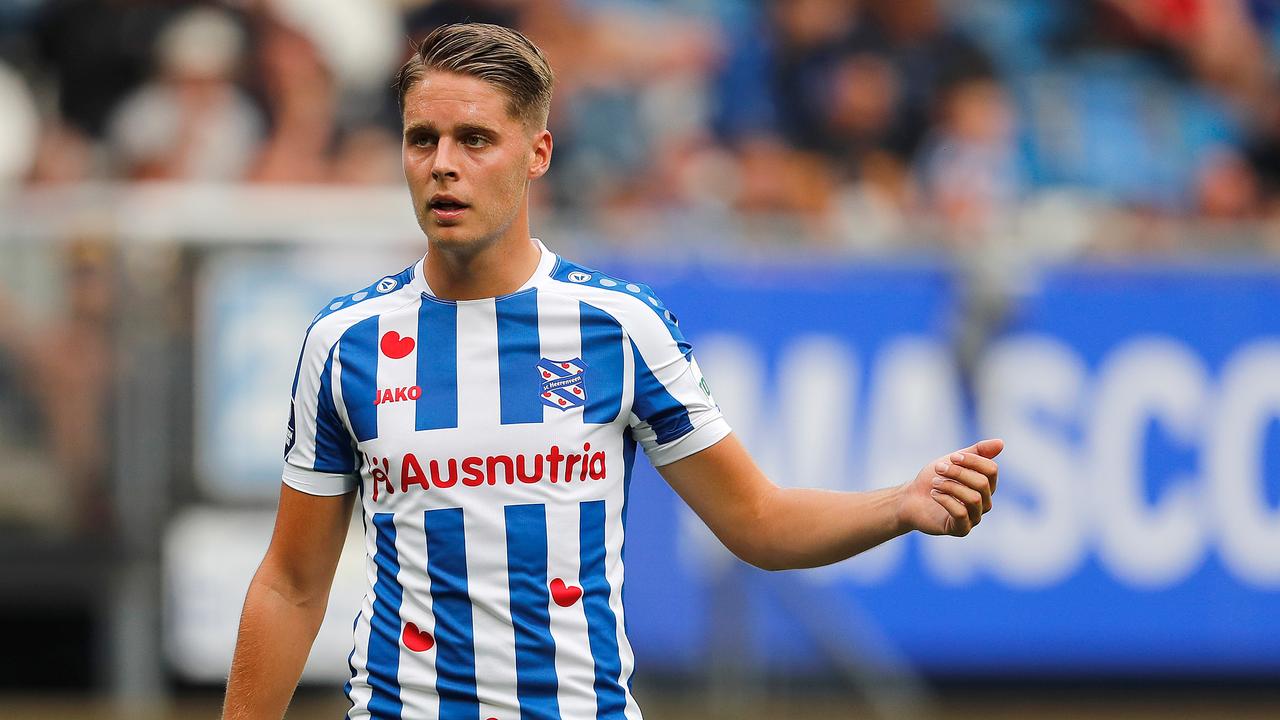 Koopmeiners seems to be playing last game for AZ

his last game for AZ today.

According to trainer Pascal Jansen, the deal with Atalanta is "except for a number of details".

He didn't hesitate to draft it.

"Teun is currently a player of AZ and then I can just use him."

Despite AZ's interest in Joey Veerman, the midfielder is just in the base at Heerenveen for the duel with the Alkmaarders.

The captain would be well on his way to Atalanta, but trainer Pascal Jansen has enough confidence in the defender annex midfielder.

The focus in this live blog is now on sc Heerenveen-AZ and that is a spicy match for Joey Veerman.

This morning it was announced that Heerenveen had rejected an offer from AZ for the playmaker.

It is not clear what amounts are involved in the transfer.

Ali Akman is well on his way to becoming a crowd favorite at NEC.

The Turkish striker gives the Nijmegen team the victory over Heracles Almelo by heading in the winning 0-1 just after the break.

Sinan Bakis takes his second yellow card of the match in the 41st minute after an altercation with Iván Márquez.

Ajax makes a statement to the critics with an impressive victory over Vitesse.

After last week's 1-1 against FC Twente, the team from Amsterdam is too strong for the club from Arnhem at home with 5-0.

At halftime it is already 3-0 for the team of coach Erik ten Hag, thanks to goals from Antony, Edson Álvarez and Ryan Gravenberch.

After the interruption, Tomas Hajek (own goal) and Davy Klaassen lift the margin to five.

86 'Lisandro Martínez also has another tour de force in mind.

The defender tries the goal of Vitesse goalkeeper Markus Schubert with half a bicycle kick, but his bet goes high over the Arnhem goal.

NEC misses an excellent opportunity to decide the match against Heracles Almelo.

Jordy Bruijn dramatically shoots a penalty and sees the ball hit the post.

Under a thunderous applause, Antony blows the retreat in the Johan Cruijff ArenA.

The Brazilian is allowed to take a seat on the bench after 75 minutes of football and is replaced by Steven Berghuis, who can finally replace trainer Erik ten Hag.

73 'And there is the next chance for Ajax.

Sébastien Haller is still dry in this race and will remain so for the time being.

From close by, he taps over a cross from Antony.

Hoongelach fell to NEC after the 5-0 defeat against Ajax, but arch-rival Vitesse is not doing much better in the Johan Cruijff ArenA.

The Arnhem team is played from pillar to post by Ajax, which wants to show the critics that it is actually hungry.

Ajax does not stop scoring and is now even 5-0 against the weak Vitesse.

Dusan Tadic puts the ball high in front of Lisandro Martínez, who neatly prepares the ball with his head for the detached Davy Klaassen.

The attacking midfielder taps the ball in from close range and scores his first goal of the season.

64 'That Vitesse is a collection of individualists, Lois Openda demonstrates with this possibility.

The attacker has to play the ball on the freestanding Hilary Gong, but he goes for his own success and rams the ball sky high.

He never has eyes for Gong.

Thanks to Vitesse, Ajax takes a 4-0 lead in the Johan Cruijff ArenA.

Dusan Tadic sees his cross being touched by Tomas Hajek and therefore Vitesse goalkeeper Markus Schubert has no chance.

The goal will go down in the books as an own goal by Hajek.

The game after the break is the same as before: Ajax frolic about the field in the Johan Cruijff ArenA and put Vitesse's back against the wall.

The Arnhemmers will now call for their mother.

The torture for the team of trainer Thomas Letsch takes at least another half hour.

Antony breaks through on the right flank and gets a second chance after a failed lob.

In the rebound, Sébastien Haller has the ball for tapping in, but he aims very high.

Ali Akman does it again for NEC!

The striker, a cult hero in the making after his earlier goal against PEC Zwolle, opens the score for the Nijmegen team with a header from close range, who are on their way to a victory over the ten of Heracles Almelo.

Souffian El Karouani's cross seemed to be behind, but referee Jochem Kamphuis simply awards the goal.

The ball rolls again in Amsterdam and Nijmegen for the second half of Ajax-Vitesse (3-0) and Heracles Almelo-NEC (0-0).

Will there be more goals in Amsterdam?

And will the spell finally be broken at Heracles-NEC?

Trainer Thomas Letsch intervenes hard at Vitesse after the humiliating first half against Ajax.

He makes three substitutions and takes Riechedly Bazoer, Yann Gboho and Nikolai Frederiksen to the side.

Hilary Gong, Thomas Buitink and Patrick Vroegh come in for them.

These are the impressive statistics of the first half of Ajax against Vitesse:

They also have tea at Heracles Almelo-NEC and all players will have to calm down there.

Due to the riot between Sinan Bakis and Iván Márquez, Heracles has to continue with ten men and NEC is lost for a while.

Just before that, Rai Vloet shot the ball on the outside of the post on behalf of Heracles Almelo.

All of a sudden the stops go completely wrong with Sinan Bakis and Iván Márquez.

Bakis takes the ball with him and Márquez knocks it out of his hands, after which she stands head to head.

Heracles striker Bakis receives his second yellow card of the match and is allowed to push in.

The spectators in the Johan Cruijff ArenA can catch their breath after a spectacular first half between Ajax and Vitesse.

The reigning national champion was fiercely criticized after the 1-1 against FC Twente and now shows against Vitesse that it can indeed be hungry and decisive.

Thanks to goals from Antony, Edson Álvarez and Ryan Gravenberch, the team from Amsterdam leads 3-0 at home.

Ajax sends out a strong signal to all critics after the draw against FC Twente and after a gala performance it is already 3-0 against Vitesse.

Edson Álvarez beautifully curls the ball onto the crossbar, after which Ryan Gravenberch immediately takes the rebound on his slipper and bounces the ball over goalkeeper Markus Schubert.

What a start from Ajax.

Referee Danny Makkelie gives the former Ajax player a yellow card and the defender is not allowed to grumble about that.

The attacker, who was taken over from FC Copenhagen for 12 million euros yesterday, sees his new employer impress against Vitesse, culminating in a 2-0 lead.

Half an hour has also passed at Heracles Almelo-NEC and no goals have been scored there yet.

There have been no chances either.

The defender heads the ball in from close range after a corner kick has been deflected.

Initially, the goal did not go through due to the Mexican's offside, but the repetition shows that the ball comes off the leg of Vitesse player Riechedly Bazoer and thus the offside rule is circumvented.

The VAR proves its worth in Amsterdam.

31 'And there is the next chance for Ajax, which really does not benefit from the weak Vitesse.

Ryan Gravenberch's shot is touched by the leg of the flying in Sondre Tronstad and just misses the post.

28 'Dusan Tadic gets the crowd on the benches when he takes a pass from Daley Blind with his heel and then lays the ball for Sébastian Haller with his heel.

The striker hadn't counted on that and with an extreme effort comes a shot, which is once again turned by Vitesse goalkeeper Markus Schubert.

24 'Ajax makes a gala performance of the Johan Cruijff ArenA and overwhelms Vitesse, but it can blame itself that it is 'only' 1-0.

For example, captain Dusan Tadic gets an imposed chance at the 2-0, but Vitesse goalkeeper Markus Schubert saves with both hands.

Ajax coach Erik ten Hag reminded the viewer of the Vitesse-Ajax before the match, when Antony played the Vitesse defense "drunk" according to Ten Hag.

This is also the case now.

The handy Antony is a plague for the Arnhem defense, which is on the squeak and crack.

After a nice kick by Maarten Stekelenburg and a good header from Sébastien Haller, Ryan Gravenberch outplays the Vitesse goalkeeper Markus Schubert, but his effort is taken off the goal line by Sondre Tronstad.

16 'What an opportunity for Vitesse.

Inexplicably enough, Nikolai Frederiksen does not give the ball to the completely detached Matús Bero, who also scolds his teammate.

This should have been the 1-1 for the Arnhem team.

Antony finally gets a base place from trainer Erik ten Hag after his golden Olympic Games with Brazil and crowns that after five minutes of play with a nice goal against Vitesse.

A lightning start for the right winger and his Amsterdam club.

9 'Ajax has launched like a rocket in the Johan Cruijff ArenA and impresses with beautiful combination football and aggressive hunting against the weakly playing Vitesse.

The team from Amsterdam seems to have learned their lesson after the defeat against FC Twente.

The match is less than five minutes old when Antony immediately breaks the spell in the Johan Cruijff ArenA.

The replacement for the passed Steven Berghuis promotes a nice heel from Noussair Mazraoui with a spike in the far corner to a goal.

The ball rolls in Amsterdam.

That means that Ajax-Vitesse has started.

The kick-off at Heracles Almelo-NEC is yet to come because there is a hole in a goal.

After a delay of about three minutes, the first whistle also sounded.

Overmars thinks that Neres and Tagliafico will stay

"I still don't know. We have made agreements with Tagliafico and we keep them. It can still happen. That also applies to Neres. It all goes a bit slower and harder. The spots are busy in the front. But the chance is small that he leaves."

Sébastien Haller was again the subject of discussion last week because the record purchase would not leave its mark on Ajax's game enough.

Did the Ivorian have his sights set this afternoon?

With the last position games Ajax is warming up for the important home match against Vitesse.

According to trainer Erik ten Hag, it means nothing that Steven Berghuis starts on the bench in the home match against Vitesse.

"Antony is back and fit. In the previous game against Vitesse he played the whole left side drunk. I chose him especially for this game."

Without the passed Steven Berghuis, Ajax is currently preparing for the home match against Vitesse.

After the draw against FC Twente, the team from Amsterdam must show recovery in the Johan Cruijff ArenA.

The last Feyenoord coach to lose for the first time within three matches was Fred Rutten in 2014/2015.

Feyenoord lost its last two official games of the season in all competitions, after being unbeaten in the first seven games (W6-G1-V2).

Luis Sinisterra gives Feyenoord the lead just before the break, but FC Utrecht comes alongside before the interruption via Willem Janssen and runs to 3-1 in the second half via Moussa Sylla and Simon Gustafson (penalty kick).