Dialogue丨Guan Chenchen: On the highest podium of the Olympics, at a naughty age

Chinanews Client Beijing, August 26th. Title: (Question about East and West • Chinese Athletes) Guan Chenchen: On the highest podium in the Olympics, at the age of mischief   China News Network reporter Yue Chuan   "Use one word to describe yourself, what would you choose?"   The 16-year-old Guan Chenchen said without thinking, "Naughty!"   Contrary to the boldness and steadiness displayed o 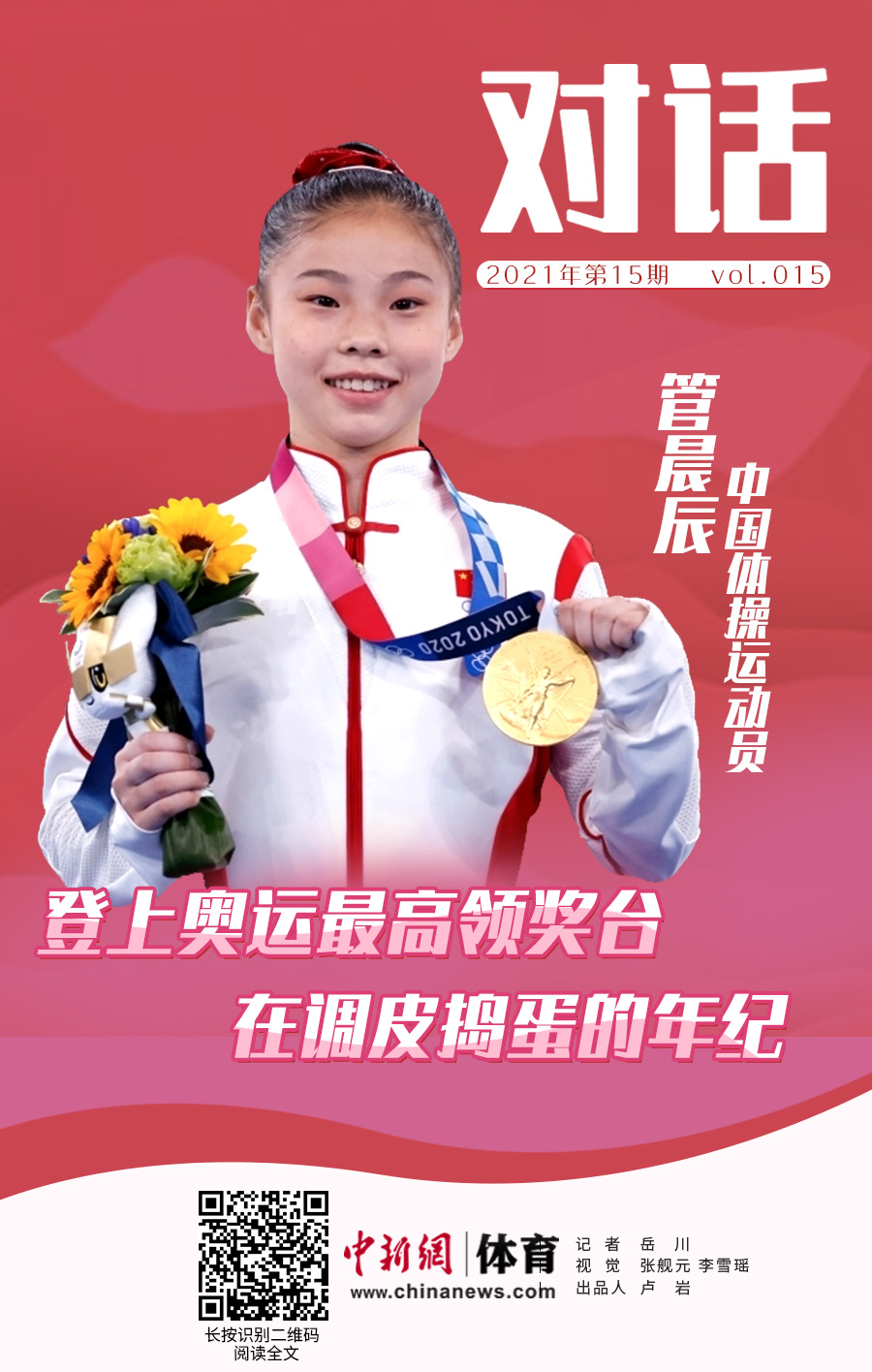 Chinanews Client Beijing, August 26th. Title: (Question about East and West • Chinese Athletes) Guan Chenchen: On the highest podium in the Olympics, at the age of mischief

"Use one word to describe yourself, what would you choose?"

Contrary to the boldness and steadiness displayed on the balance beam, active, smiling, lively and cheerful, this is what Guan Chenchen sees as himself.

The composure and firmness in the arena is easy to forget the people around him. Guan Chenchen is actually only a 16-year-old girl.

But she, who thinks she is still a bit naughty, helped the Chinese gymnastics team win the turnaround of the Tokyo Olympics.

Embarked on the Olympic arena, completed the high-quality complete set, stood firmly on the ground, and won the championship gold medal.

Guan Chenchen actually saw this scene more than once in his dream.

Such a beautiful dream will come true this summer.

Relying on the huge advantage of super-high difficulty, the balance beam final of the Tokyo Olympics, Guan Chenchen took the lead and climbed to the highest podium.

As the finale player of the Chinese gymnastics team in this competition, she brought the team's trip to a successful conclusion.

Guan Chenchen proved with her actions that even though she was still young, she could bear the burden and the corresponding honor.

In a recent conversation with Sino-Singapore Sports, Guan Chenchen shared the journey of participating in the Olympic Games for the first time and her indefinite expectation for the future.

China-Singapore Sports: What are you doing during the period of isolation?

Have you ever been alone for so long before?

: Not at all before.

Every day, I will stretch and exercise in the room to keep my body in shape.

I also often contact my parents. They are very concerned about whether I am happy and how I am, and they also tell me to protect my body.

In free time, I can sing and learn to dance.

Zhongxin Sports: Who do you like to listen to?

What dance are you learning recently?

: Usually I play music by myself, listen to whatever it is broadcasted, and sometimes sing along.

I like to listen to a lot of songs, and I like Zhou Shen's song the most.

Sometimes I study for a long time, but I still laugh when I see my actions.

Zhongxin Sports: With your foundation and flexibility, learning to dance should be fast, right?

It may be a little better, but I learn quickly and forget it quickly (laughs).

Sino-Singapore Sports: You once said that before the Olympics, you often dreamed that you won the Olympic gold medal.

After it came true, have you dreamed of anything recently?

: I can feel that I was dreaming at night, but I forgot when I woke up in the morning, so I can't remember what I dreamed of (laugh).

The biggest change is self-confidence

Sino-Singapore Sports: The Tokyo Olympics has been over for a while. Do you still think about the scenes on the stadium now?

Which ones are the most impressive?

: I still think about it. After all, it is the Olympic Games. This is a very unforgettable memory.

The most memorable moment is to stand on the championship podium, raise the national flag and sing the national anthem.

Sino-Singapore Sports: Looking back now, how do you evaluate your performance in this Olympics?

: (Balance beam) It was okay during the qualifying matches. I have been immersed in my own actions and didn't think too much.

But there are ups and downs in the middle, because in the training after the preliminaries, my movements sometimes have some flaws, and then I need to adjust myself in time.

In fact, for me, my performance in the finals was not very satisfactory. I might have played 60% to 70%, which was not my best result.

Because in daily training, there are still a lot of high-quality sets.

But in the finals, maybe because of tension, he didn't perform at his best.

In fact, during the competition, I didn't care much about the performance of other players. I focused more on my own actions, trying not to think about the results, and to complete the process.

Sino-Singapore Sports: This is your first time participating in the Olympic Games.

After returning from Tokyo, what is the biggest change for you now compared to before?

: I think it is self-confidence.

After all, I have participated in the Olympic Games and achieved such results, and my self-confidence has been improved to a certain extent.

There is also the feeling of completing the action, and it may be more calm than before.

: Speaking of actions, I have to mention "Kangaroo Shake", which is now considered popular in the world.

How was it added to your arrangement in the first place?

Director Xu saw it in a dance and thought it was particularly suitable for me, so he added it for me.

I like this action very much, but I never thought it would be liked by so many people.

If I find a good-looking action in the future, I will also try to add the arrangement.

Zhongxin Sports: How did you feel when this action was on the hot search?

Did you call it "Kangaroo Shake" before?

: I didn't feel much at the time, but I felt that my actions were very similar to kangaroos.

In fact, I discovered the "Kangaroo Shake" after the competition, but I didn't associate it with my actions at the time.

Later, I heard everyone say that I realized that I also felt that it was indeed alike.

Zhongxin Sports: You said before that you love to collect all kinds of cups with lids. You like thermos cups and straw cups.

Have you received a lot of gifts now?

: Because I was still in isolation, the express delivery was stopped.

But I heard my mother say that there are a lot of cups at home, and she took pictures of them to show me, many boxes.

Thank you very much, I don't need to send it anymore, because there are already many, and I feel like I can store a small warehouse.

Everyone gave me the best

Sino-Singapore Sports: It has been 4 years since entering the national team at the end of 2017.

Talk about this experience.

: Thank you very much for the care and care of the coaches. My sisters (teammates) are also very kind to me.

When I first joined the team, I didn't understand anything, they would tell me what to do.

Everyone will leave the best-looking gym suit for me to wear, and they are helping me and taking care of me during training.

When I am with everyone, I feel very happy.

Now I also want to meet the coaches and teammates, and miss them.

Sino-Singapore Sports: How did you get involved with gymnastics at that time?

: Actually, when I first came into contact with gymnastics, I thought it was fun.

I belong to the kind of person who loves to move and can't stay idle. After encountering balance beams and uneven bars, I feel particularly fun.

Because of my age, my enlightenment coach thought that I might not be suitable for gymnastics.

But I clamored to say that I must practice, and that's it.

Sino-Singapore Sports: Will you read the messages everyone left for you?

What do you want to say to fans?

: I have seen it, but I will not pay attention to it.

Thank you very much for your brothers and sisters who care about me. Thank you for your continued support.

I will continue to work hard and train hard.

Small goals one after another

Sino-Singapore Sports: I am about to lift the quarantine, what do you want to do most?

: Because it's very close to the time of the National Games, I can't relax my heart. I still have to go back to the province and prepare for the game with all my strength.

Zhongxin Sports: What goals have you set for your future?

So I will set a small goal for myself, and then I will achieve the next small goal after I finish it.

The most recent one is better than the National Games.

In addition to the balance beam, I also hope that I will work towards the all-around in the next games.

Sino-Singapore Sports: As you said, the highest podium in the Olympics is not actually a step up, but is connected with one small goal one after another, right?

: For me, the important thing is to complete the process.

In fact (to win the Olympic champion), I still feel a bit unreal.

Although this is true, there is still a feeling of being in a dream.

Now I'm getting used to it slowly, and I have to come out as soon as possible.

After all, he has already stepped off the podium, and everything has to start from scratch.