Agreement with Tarasov, Bellator's proposal and refusal from alcohol: how Alexander Emelianenko returns to sports

Russian fighter Alexander Emelianenko is actively preparing to return to the ring after more than a year's pause. Blogger Artyom Tarasov will be his first rival. The contract for the fight was signed last week, and the meeting itself will take place on September 18th. According to the manager of the athlete Azamat Bostanov, by the end of the year his client can fight with rapper Dzhigan, Vladimir Mineev and Vyacheslav Datsik. The athlete himself expressed a desire to take part in the Bellator tournament in Moscow, which will be held in October, and to perform in the same card with his older brother Fedor. 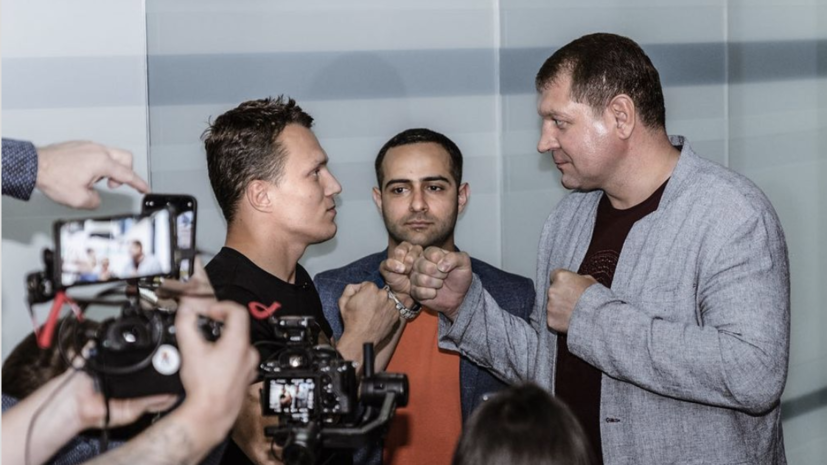 “He's not a fighter at all.

I don't know why Artyom comes out against me "

The famous Russian mixed martial arts fighter Alexander Emelianenko has recently regularly appeared in the sports media space. He often gives interviews to journalists and is actively preparing for the upcoming battles. His closest rival will be blogger Artyom Tarasov, one of the main protagonists of domestic pop MMA. In 2021, he had two fights according to the rules of boxing and was defeated in both: from the strongman Mikhail Koklyaev and the champion of Cameroon Tyson Dijon. According to Emelianenko, a 30-year-old amateur will not be able to compete with him.

“There are absolutely no chances.

Even the thought should not be admitted that he can win.

He can run off a round or two in the ring, but to beat - does not hit, he is not a puncher, not a drummer.

He's not a fighter at all.

I don’t know why he’s coming out against me, ”the former PRIDE member told the YouTube channel Fight Nights Global TV.

“Now my hands are flying very well and quickly, with high quality, hard.

There will be a lot of boxing matches, ”Emelianenko added.

The contract for the fight was signed on August 21.

The meeting itself will take place in Moscow on September 18, and it is organized by the "Our Business" promotion.

“According to the rules of fist fights, there will be three rounds of two minutes in MMA gloves.

Backfists are allowed, ”said the president of the league Artur Harutyunyan.

The rivals did not hide the amount of fees they would receive.

At a special press conference and a duel of views, Tarasov showed reporters the text of the agreement, in which the figure of 5 million rubles was spelled out.

In response, Emelianenko's manager Azamat Bostanov said that his client would earn twice as much.

Although the blogger is significantly inferior to the eminent rival in sports terms, he assured that he was not going to “run away from the opponent” and expressed his readiness to fight.

“To defend all the rounds is not to lose.

And if something works out, it will be a sensation.

As happened in the battle of Alexander with Maga Ismailov.

He also created a sensation.

Of course, I understand that technically Emelianenko is a very tough fighter.

This is a big challenge for me.

The most important thing is that people like it, ”Tarasov said.

He has a different priority "

As for Emelianenko, he last entered the "cage" in July 2020 and lost to Ismailov by technical knockout.

This time, the athlete's representatives do not intend to make such a long pause.

According to Bostanov, Alexander will play four fights in four months.

In November, he is to meet with rapper Djigan, approximately at the end of December - with the famous fighter Mineev.

Of course, on the eve of the fight, Emelianenko could not help but ask about his problems with alcohol.

Alexander assured that at the moment he does not drink and is actively preparing for battles.

“I'm going to spar twice a week - on Wednesday and Friday.

Moreover, it will be training with very good fast professional fighters who are worthy of competition.

I will approach the confrontation in excellent shape, ”the athlete promised.

According to Emelianenko, he does not even remember the last time he drank.

The fighter also denied information that he allegedly drank alcohol the day before the fight with Ismailov.

“I don’t know where these rumors come from, but they are not.

Then I got a little overloaded, yes.

He listened to the seconds incorrectly: he sat down strongly on his feet, which should not have been done.

You just had to easily move on your feet, pull the Magu and hit from afar.

And I sat down and loaded.

It was very difficult for me to move on the bent ones.

I was not worried, but the fight did not work out, ”he said in an interview with the YouTube channel“ Ushatayka: Sport-Express ”.

The fighter's manager Bostanov also assured that the athlete is in good health.

He doubted that Emelianenko Jr. would be able to enter the ring at all, since he suffers from addiction and can break off at any moment.

He has a different priority.

One could take Sasha by the hand and bring him to the "cage", but it's like sitting on a powder keg and waiting for it to explode.

Sanya is a good kid, but unreliable.

He is superb in the media, but he is absolutely haphazard about the training process and can really fail, ”Hajiyev said in an interview with sports journalist Alexander Lyutikov.

"Told my manager to go to Bellator"

Emelianenko himself continues to prepare for fights, and at the same time is engaged in branded trash talk.

In conversations with media representatives, he managed to hook both Tarasov and Datsik.

In particular, the latter, in his opinion, does not know how to box.

“I watched his last fight.

He just has sweeping blows.

Rushing forward and doing nothing really.

Throws blows from under the ass to the head.

And so he is dead in boxing.

Is your head strong?

His opponent was hitting incorrectly and inaccurately, ”the athlete quotes the BSNEWS YouTube channel.

At the same time, Emelianenko walked through Sergei Kharitonov, with whom he has a protracted conflict.

Last week, the 41-year-old Russian lost to Cheiku Congo, and his compatriot did not miss the chance to criticize him.

In particular, he rebuked the athlete for the decision to surrender one second before the end of the second round.

“I think he will continue to drain all the fights and just make money.

He will no longer take on the form in which he was before.

Kharitonov's time in the "cage" is over ... Such a version could not have done anything against me.

According to him, he is always ready to meet with Kharitonov.

But he allegedly asked for too large a fee when Kamil Hajiyev tried to organize their confrontation.

Recall that the first meeting between the fighters took place 15 years ago, and Emelianenko then took over by technical knockout.

In turn, Sergei did not criticize his colleague for participating in pop-MMA, but, on the contrary, treated his choice with understanding.

“He needs to earn money and feed his family.

If he doesn't fight, then what?

Imagine a person who once performed somewhere abroad, and now lies homeless and finishes his last bottle.

He does the right thing, and what is left for him?

We have to fight somewhere, ”said Kharitonov.

Emelianenko also rebuked Ismailov for his unwillingness to carry out a revenge: “There was talk about a revenge.

I asked him to give me a fight.

Said, "I won't fight you anymore."

But most of all the fans were surprised by the news about the possible return of the fighter to Bellator.

On October 23rd, the promotion will host the first ever evening of fighting in Russia.

Fedor Emelianenko will take part in this event, who will compete with Timothy Johnson.

Alexander said that he would like to enter the octagon with his brother.

“Since I am not allowed to enter the United States, and the tournament will be held in Moscow, I told my manager to go to Bellator and suggest that I play at their tournament, on the same card.

If it doesn't work out, I have someone to fight with, full of suggestions, ”said the athlete.

In turn, Bostanov confirmed that he is negotiating with the promotion.

However, according to the manager, it will not be easy for his client to get in such a shape to take part in such a serious competition.

Thus, he made it clear that signing a contract with Bellator is unlikely today.

“Let's be honest: fighters like Tarasov and Bellator are different concepts. With all due respect to Artyom, you will need to seriously and persistently prepare for them, but Alexander has a desire. Now let's see if possible. Trainings are in full swing. For my part, I made a request, and they came to me with the answer that this proposal is interesting, but no more. There is no specifics yet. We have an agreement on detailed negotiations, but they have not started yet, ”Bostanov explained.