During the period from August 30 to September 5, the world scene of cycling is witnessing an exceptional event that is difficult to repeat, championed by the Emirati Al Mutaiwei family, with the participation of the father and son in two separate global races at the same time, when Father Ahmed carries 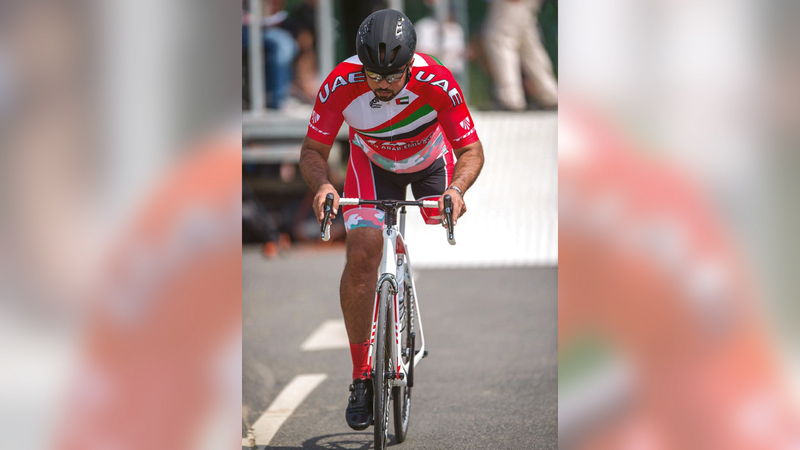 During the period from August 30 to September 5, the world scene of cycling is witnessing an exceptional event that is difficult to repeat, championed by the Emirati Al Mutaiwei family, with the participation of the father and son in two separate global races at the same time, when Father Ahmed (40 years) holds the flag of the state. In the competition for the gold in the road and anti-clock races at the “Paralympics Tokyo 2020”, in the first appearance of an Emirati cyclist of determination in the history of the Paralympic Games, coinciding with the participation of 17-year-old son Mohammed in the World Youth Cup in Egypt.

Father Ahmed Al-Mutaiwee told "Emirates Today", "It is a great honor for me and my son to represent the Emirates in two separate world races at the same time, in a global scene that is difficult to repeat, embodying the extent of the social connection of the citizens of this generous country, and the great support given by Their Highnesses Sheikhs, Rulers The Emirates for all Emirates sports, especially since my participation with the People of Determination team (Tokyo 2020) represents the first appearance of an Emirati cyclist in the history of the Paralympic Games, in a period that coincides with Mohammed’s participation in the World Cup in Egypt.”

He explained: “My connection with my son in cycling is due to Muhammad’s passion to follow me and accompany me in all walks of life, especially after the long treatment journey and more than 30 operations I underwent between Germany and America as a result of an accident I suffered in 1997, and the doctors had to decide to amputate my leg in 1999. And relying on prosthetic limbs and implanting a prosthetic foot in 2013, before resorting in 2015 to cycling and driving with one leg, with the aim of self-challenging and the ambition to return part of the debt to this benevolent country in a path during which it succeeded in reaping local and international achievements, which acted as an incentive for my sons Muhammad in Gradual involvement in this sport.

He added: "Despite my attempts to dissuade Muhammad from riding bicycles and focusing on studying, his insistence on accompanying me was behind responding to his desires, and allowing him to accompany me in training, before quickly revealing his talent, and succeeding in joining the Abu Dhabi Cycling Club, at a station represented by Hajar. The basis for achieving local achievements, which quickly led him to represent the country’s junior national team, with which he achieved in 2019 the gold and silver of the Arab Championship.”

He continued: “Despite the difference between the two training devices for me and my son, as I participate in the People of Determination races, and Muhammad in the misfits races, we were keen to encourage each other, and he was behind his keenness to be with me always, even in the external camps, the last of which was our presence together in the German and Austrian camps during my month. July and August, as part of my preparation to represent the country’s national team in the road and anti-clock races at the (Tokyo Paralympic Games), and Mohamed’s readiness to compete in five different races in the World Cup in Cairo.”

He concluded: “Great ambitions in my ability and my son in our participation in (Tokyo) and (Cairo) to achieve the dream that the world’s athletes aspire to, which is raising the flag of the state in major international forums, and achieving a father and son from an Emirati family two achievements in two separate world championships with the slogan of People of Determination. And the normal together, in a vivid image that once again embodies the extent of the great support given by Their Highnesses, the rulers of the Emirates to all members of society, and the leadership of the UAE government globally in achieving the integration of all segments of society.”