The match of the 3rd day of the French championship between OGC Nice and Olympique de Marseille, Sunday August 22, was punctuated by violent incidents. The match degenerated in the second half after… 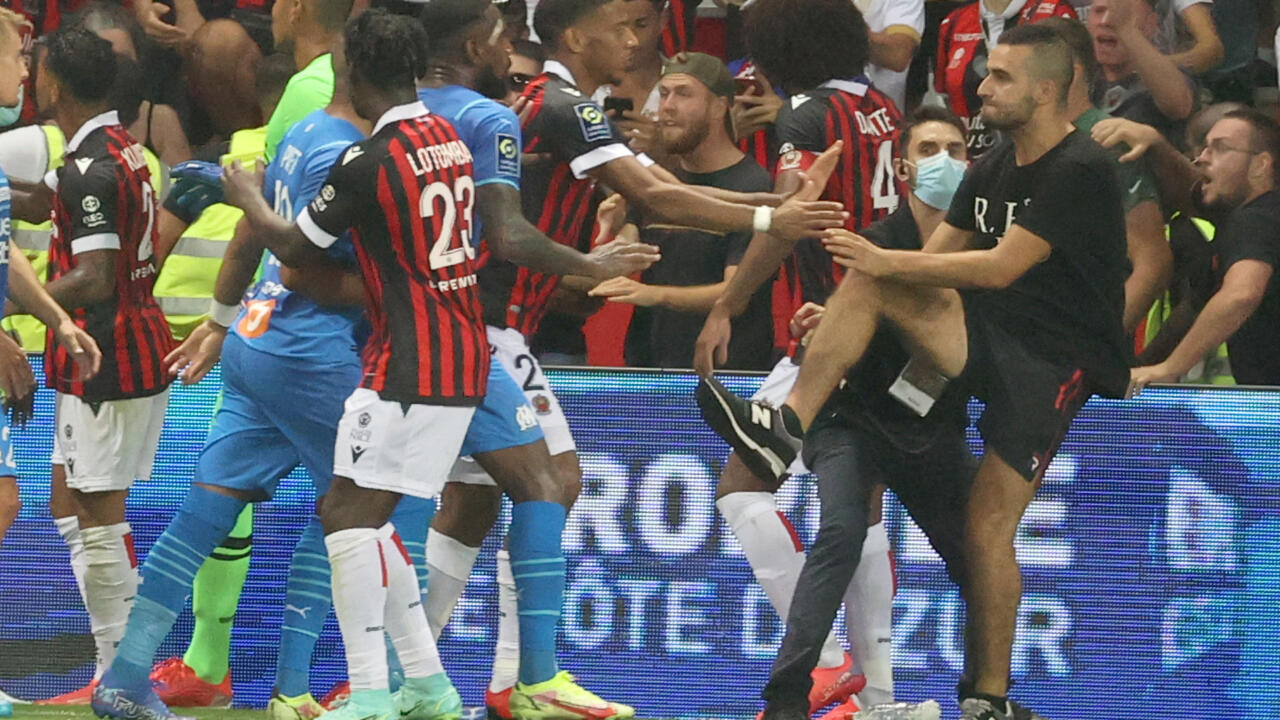 Only 15 minutes remained to play at the Allianz-Riviera stadium, filled with 32,607 spectators.

Nice led 1-0 against Marseille thanks to a goal from Denmark's Kasper Dolberg in the 49th minute.

The match was fun to watch and the suspense was there.

And then the incident too happened.

Several times during the meeting, the OM players were subjected to jets of projectiles, launched by some Nice supporters.

The announcer's warnings did not change anything.

In the 75th minute of play, everything changed.

As he recovered the ball to hit a corner, Olympian Dimitri Payet received a plastic bottle on his back.

The captain found himself on the ground in pain before getting up, furious, and sending the bottle back where it came from.

Chaos then settled on the field and in the stands.

Some supporters overwhelmed the security system and were able to enter the pitch to fight physically.

Alvaro, the OM defender, hit a ball towards the stands.

Staff from both teams got involved.

In the crush, blows were exchanged.

Faced with these uncontrollable events, and in an execrable atmosphere, the referee Benoît Bastien stopped the match and sent the two teams back to the locker room.

The Marseillais, angry, refused to resume the match

They showed the Marseillais with the scars of the clashes: Matteo Guendouzi with signs of strangulation, Luan Peres with a sore throat, Dimitri Payet with the bruise left by the bottle ... While Jorge Sampaoli, the Marseille coach, fumed in behind the scenes of the stadium, Jean-Pierre Rivère, the president of OGC Nice, went to contact the supporters to call for calm.

For 1h30, uncertainty hovered: would the match resume?

The Professional Football League (LFP), in charge of organizing the French championship, decided, in agreement with the prefecture, that the match should go to an end.

The Niçois returned to the field to warm up before the resumption.

But the Marseillais, them, did not reappear.

The referee therefore noted their absence and whistled the end of this stormy meeting.

In the process, the Ciel et Blanc clan spoke out.

In a short video, Pablo Longoria, the president of OM, justified this decision not to play the remaining 15 minutes.

The words of the president 𝗣𝗮𝗯𝗹𝗼 𝗟𝗼𝗻𝗴𝗼𝗿𝗶𝗮 following the incidents that occurred this evening at the Allianz Riviera.

"This is already the second time that we have experienced this," added Pablo Longoria.

On August 8, during the first day, the Marseillais had already been targeted by projectile jets during their match played in Montpellier.

After several warnings, the referee interrupted the match for ten minutes.

But the situation had not deteriorated like in Nice.

"The referee was with us. He confirmed to Jorge Sampaoli and me that safety was not guaranteed and had decided to stop the match," Pablo Longoria insisted.

For the Spanish leader, "what happened today is completely unacceptable".

"We must set a precedent for French football," he said, calling for sanctions.

Despite the absence of OM players for the resumption, OGC Nice has not obtained, for the moment in any case, the gain of the meeting.

The match is "abandoned", to use the expression used by the League, and there is no mathematical impact on the standings for the two clubs, pending further clarification.

But the sporting aspect appears secondary after the events of Sunday.

Critics are coming from all sides.

The faulty supporters are singled out, after a year and a half of behind closed doors due to the Covid-19 pandemic.

The failing security service is also criticized, as well as the LFP.

And between the two clubs, the tea towel burns.

If he did not dispute the inadmissible attitude of the Nice supporters who threw projectiles, Jean-Pierre Rivère criticized the behavior of the Marseillais too. “Unfortunately, what ignited the powder was the reaction of two Marseille players to reject these bottles, or other bottles, through the stand of our supporters. And then after, it was a bit chained, "he said at a press conference. He also accused the security service of OM of having struck two players from Nice.

Earlier, the Nice leader and his Marseille counterpart had to be separated in the presidential platform.

"They grabbed each other by the collar and the bodyguards had to separate them," a witness told AFP at the scene.

The game continued in words.

And it may not be over, because after the clashes on the lawn, this Nice-Marseille will continue in front of the football authorities.