After the final signal between Östersund and Kalmar, a fight broke out and ÖFK's Samuel Mensiro was noticeably angry. Oliver Berg is accused of making a racist statement - something Kalmar denies. - He swears free and is completely broken about the situation, says sports director Jörgen Petersson to SVT Sport. 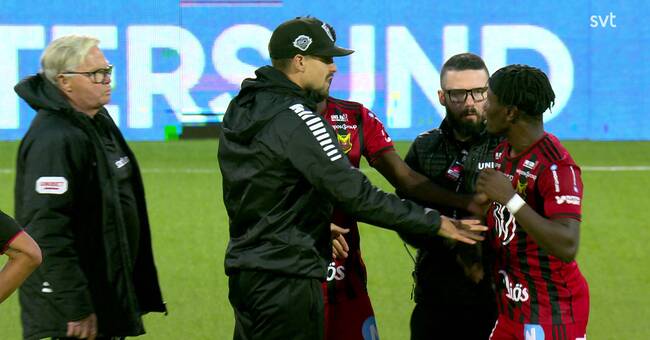 Östersund's midfielder Samuel Mensiro had to be held back by his teammates when the final signal sounded.

According to Östersund's sports director Adil Kizil, the 32-year-old has received racist attacks.

- It is a bit difficult to say exactly what has happened, but what we have heard from our player is that a player in Kalmar mocks and speaks racistly against him.

It is completely unacceptable if that is the case, says Kizil in Discovery +.

After the match, Kalmar's Nils Fröling was unaware of the incident.

- I have no idea what happened, but this is not how it should look after a match, regardless of whether you have lost or won.

I do not know what they are arguing about, but it should not be like this, says Kalmar's goal scorer Nils Fröling.

Kalmar's sports director Jörgen Petersson confirms for SVT Sport that it is the Norwegian who is accused of racist allegations.

- The situation is 80 meters away, so it is impossible to hear anything.

But I find it incredibly difficult to even imagine that Oliver as a person would go into that kind of talk, Petersson says to SVT Sport and continues:

- He swears free and is completely broken over the situation.

- It will be very important to investigate it properly and see if you can come to what has been said and not, she says in the Football Studio.