For the third time in four years, the jury has voted Umeå as Sweden's best sports city. It is the top width with many sports, men and women, summer and winter - that stands out. With 299 jury points, they were ten ahead of Örebro, which took its best place since the victory in the premiere year 2011. 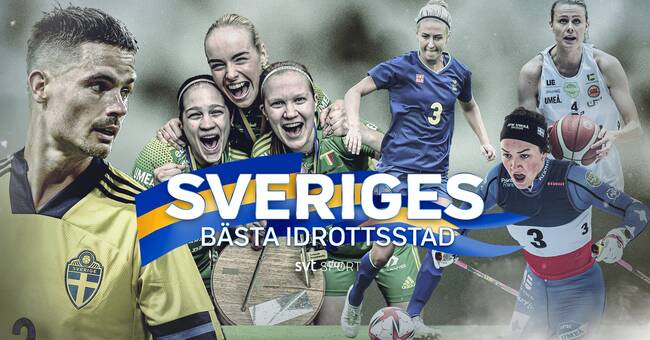 "Great success in relation to the population in both women's and men's sports and a wonderful breadth make Umeå the sports city of the year", was the motivation from SVT's commentator Niklas Nord, one of the eleven jury members who had Umeå as their number one.

In 2020, Umeå won the prize by far, the biggest victory in the prize's history.

In the past year, successes have also been mixed with setbacks, for example Umeå IK left the damallsvenskan.

Still, the jury score was enough for victory in 2021 and the trophy will remain in the birch city.

A sports-active population and a breadth among sports at the elite level make Umeå an obvious winner of this year's sports city! ”

A3 Basket reached the semifinals in its playoffs.

The football players Mikael Lustig and Emma Kullberg, the skiers Moa Lundgren and Marcus Grate and the beach volleyball star David Åhman are Umeå athletes who excelled during the year.

Örebro back on the podium

Örebro was the city that most challenged Umeå.

just ten points away from victory.

SVT profiles Yvette Hermundstad and AnnaMaria Fredholm were two of those who kept Örebro as their number one.

“A strong year when nothing was the same - Örebro is a city with breadth, edge and a feeling of really being on track.

A city we will see fight for the award also in the future ", wrote Solveig Voyce, jury member to everyday sports director at Nya Wermlands-Tidningen.

ÖHK reached the semifinals of the SHL, the club's best year ever.

ÖSK bandy went up to the elite series.

Emilia Fahlin, Fredrik Lindgren and Marcus Ericsson are some of the Örebro profiles who excelled during the year.

Örebro became Sweden's best sports city in 2011 and came second in the rankings in 2015, but since then the top places have been happy with their absence, until now.