Sweden won the premiere - after a huge turnaround

European Championships for the first time in 38 years. Then Sweden was responsible for a huge turnaround in the premiere thriller against Finland. The Swedes were down 0-2 in sets to then refurnish the numbers to 3-2 in a thrilling event. 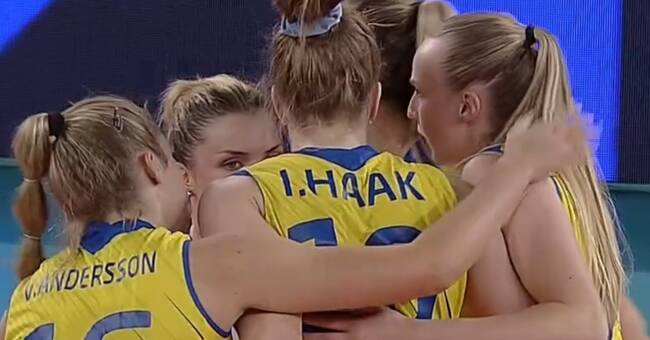 The Swedish women's national volleyball team got off to the best possible start at their European Championships in Cluj, Romania.

Our European Championship debut everyone.

We do not start well and try to find our game, in each set it gets better and better.

It's so fun that everything worked out, says Anna Haak to SVT Sport.

It started with a tight first set.

Sweden was at a disadvantage for a long time and was at one point below with 21-16.

Then the Swedes took six straight points and put themselves in a lead.

However, Finland came back and stood for a turnaround when they took home the first set to 26-24.

The second set started all the better for Sweden.

Blue-yellow was in the lead at first but Finland came back once again and also took home that set, 25-17.

Set disadvantage with 0-2 and Sweden bad out.

It would be better, though.

The blue and yellows got a good start also on the third set and had an advantage, which they managed to keep.

Sweden increased the serve reception and improved the attacking game when they won the set 25-19.

It was the first set win in the European Championships since 1971.

Then Sweden came seriously into the match.

The fourth set was an even story that Sweden took home to the numbers 27-25.

Sweden definitely went out and offered an attacking game that initially paid off handsomely.

Then the nervousness began to show.

The game got a bit messy and Finland found its way back to the scoreboard.

Sweden will face the home nation Romania on Saturday, 7.30 pm.