GUIDE: How do you watch the European Championships in volleyball on SVT

For the first time in 38 years, Sweden's women's national volleyball team will play the European Championships. The championship will be decided on August 18 - September 4 and SVT broadcasts all of Sweden's matches. - It is a very hungry national team that I think can bark a little, says SVT's expert Andréa Jacobsson. 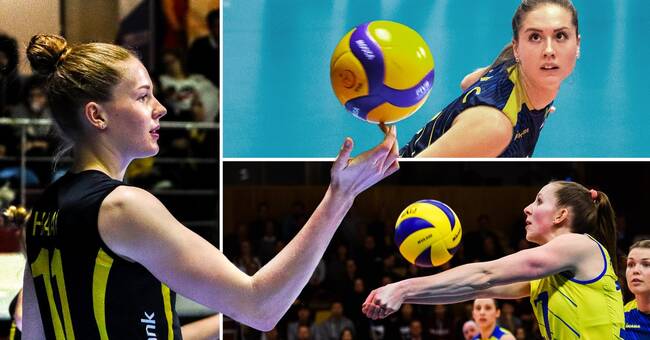 Europe's twenty - four top nations in volleyball will settle and after almost four decades of waiting and fighting, Sweden is back in the fine room.

Turkey favorites in the group

Sweden is in Group D, together with Finland, Romania, Turkey, the Netherlands and Ukraine.

- At a European Championship, there are never easy groups, but I would still dare to say that there are groups that are much more difficult than the group Sweden has ended up in. Turkey, which just played the Olympics, are favorites together with the Netherlands who always have high quality on their national team.

Ukraine and Finland are the teams that Sweden "must" win against if they are to move on from the group, says SVT's expert Andréa Jacobsson.

What is a reasonable goal for Sweden?

- This is a very hungry national team that I think can show its front feet and bark a little.

To do that, they need to get up to the level they showed in the European Championship qualifiers, and preferably a little more.

Then I think that a reasonable goal can be to get on to the first playoff round.

Many eyes are of course directed at Sweden's big star Isabelle Haak, the nail who plays in the Turkish club Vakifbank Spor Kulübü.

- Isabelle will mean a lot.

Partly through her play in all aspects of the field and the many points we have been spoiled with, but she is also important as a team captain.

It creates a sense of security and calm for other players when "Bella" is on the field, so that aspect is at least as important, says Andréa Jacobsson.

"Service reception must be improved"

In the qualifiers, Sweden showed a strong block - and defensive play together with a good attacking play from the wingers.

But there is room for improvement in other aspects.

- What Sweden mainly needs to improve is the service reception, as it lays the foundation for a varied attacking game.

They also need to start the attacking game from their centers - something that was basically invisible throughout the qualifiers.

A sharp serve will also be important to put pressure on the opponents and disrupt their attacking play, says Andréa Jacobsson.

The European Championships will be decided on 18 August - 4 September and Sweden will play its premiere match against Finland on 19 August.

SVT broadcasts all of Sweden's matches plus the semi-finals and final.