Four hat-tricks and two send-offs: what the first day of the Beach Soccer World Cup was memorable for

The first day of competition at the Beach Soccer World Championship in Moscow ended. The Japanese national team won a strong-willed victory over Paraguay thanks to the hat-tricks of Takuya Akaguma and Shusei Yamauchi. The UAE beat Tahiti in extra time. And Spain sent eight goals into the gates of the debutants from Mozambique in a meeting with two deletions. 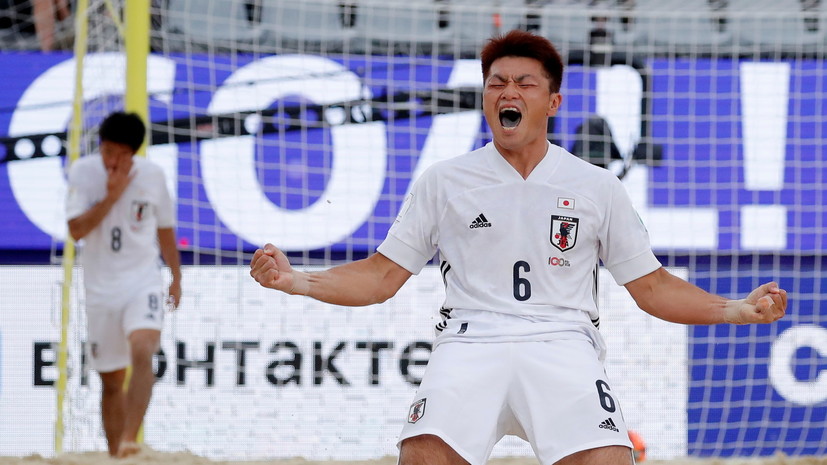 In the debut match of the tournament in the framework of Group B, the teams of Tahiti and the United Arab Emirates met.

The guests from Oceania were considered the clear favorites of the confrontation, as they reached the World Cup final twice in the last six years.

At the same time, the contender at the world championships never made it past the group stage.

However, from the very beginning it became clear that the Arab team did not intend to surrender without a fight.

The uncompromising team defended their own goal with all their might and kept it intact for a long time.

A number of great saves were made by 32-year-old Humaid Jamal.

The first goal of the world championship in Russia took place only at the end of the second period.

And even then the ricochet from the partner's leg helped to upset Humaid.

Even before the break, the UAE played back, and immediately after it took the lead thanks to the blow of Hasan Alhammadi from the center of the field.

Ahead of the sports fans gathered in the stands was a real thriller.

Shortly before the final siren, the Tahitians sent a shell into their own gates and seemed to have signed their own verdict.

But this, as it turned out, was only the beginning.

Moreover, the captain of Ryman Lee Fung Kue sent the ball into the net after a successful throw from the goalkeeper from his own half of the court.

As a result, the fate of the confrontation was determined only in extra time.

The exact blow was chalked up by Ahmed Ber Salem.

Thus, the tournament began with a great surprise.

As part of the current semi-finalist of the World Championship, the Japanese national team, everyone was waiting for goals from the captain and playing coach Ozu Moreira.

But the legend in the first match of the tournament with Paraguay "kept silent" and could not score a single point for performance.

At a difficult moment, striker Takuya Akaguma and Shusei Yamauchi took over the leadership role.

Largely thanks to their efforts, the Japanese managed to make an incredible comeback.

The Latin Americans, who had previously reached the quarterfinals at the world championships at best, almost started with an unexpected victory.

After the first period, Joaquin Emilio Molas' charges were leading - 2: 0.

The favorite possessed the initiative, but could not break through Joao Rolon, who caught the courage.

Actually, at the beginning of the match, he managed not only to reflect the penalty performed by Yamauchi, but also to cope with the finishing move.

In the second period, the Asians missed again, but won back one goal, and at the beginning of the third, Akaguma reminded of himself, having reduced the gap to a minimum.

Paraguay immediately managed to score more, but Takui, who felt confident in himself, could no longer be stopped.

In the end, he scored twice in less than half a minute and turned the course of the confrontation upside down.

First, the striker closed the serve from the corner, and then famously turned the defender and shot into the far corner.

But Yamauchi decided to keep up with his partner and in the end also scored a hat-trick.

On the second try, he still converted the penalty, and then distinguished himself from the game.

Not without hat-tricks in the match Spain - Mozambique.

The African team became the only debutant of the current World Cup and was in the status of a real "dark horse".

However, it was difficult for her to count on a successful outcome of the confrontation with one of the strongest national teams in the world.

As a result, the rivals had the most productive match of the game day, scoring 12 goals for two.

The best footballer among the winners was the experienced striker Chiki.

He hit the opponent's goal twice at the end of the starting period, and at the beginning of the final he scored for the third time.

As part of Mozambique, forward Figo scored the fourth hat-trick of the day.

Moreover, he scored two goals from the nine-meter mark.

Despite the major defeat, the tribunes conducted the African team with applause.

The fans were pleased with the dedication and diligence of the debutants.

Also, this match was notable for two deletions at once.

At the end of the first period, Mozambique defender Big Ro received a straight red card for a rough and dangerous jump to the opponent's feet.

And shortly before the final whistle, the referee kicked Antonio Mayor from the field for a last resort foul.

After the first day of competition, we can confidently say that the tournament is receiving serious attention from the fans.

And we are talking not only about the matches of the Russian national team.

Beach soccer fans actively filled the stands at other meetings as well.

According to them, it came as a surprise.

“We were surprised by these cases.

This suggests that there is a lot of interest in the tournament.

Unfortunately, not everyone can get to the stadium.

Tickets are selling very quickly and there is a lot of buzz.

But we have the appropriate authorities.

If the law is violated, we will render them full assistance.

We will discuss other restrictions in the working order, for example, the sale of no more than four tickets per person, "Alaev said.

Unfortunately, this is not the only problem faced by the organizers.

Samura has confirmed that some of the Tahiti and UAE national teams have tested positive for coronavirus and are currently isolated.

“We took the pandemic seriously from the start. Rules have been introduced for people to wear masks in all areas of the arena. Now we are working together with Russian doctors. I assure you, we will meticulously carry out all the recommendations that they will give us. Ultimately, everyone's personal discipline will decide everything, ”the functionary noted.