Veterans' letter to Alekperov and the search for a sports director: what happens in Spartak after leaving the Champions League

After Spartak's departure from the Champions League, the former players and coaches of the team wrote an open letter in which they asked the head of LUKOIL, Vagit Alekperov, to influence the current owner of the club, Leonid Fedun. In their opinion, the red and white are in an extremely difficult situation on the eve of their centenary. Meanwhile, the vice-champions of Russia continue to search for a new sports director. Also in the near future "Spartak" may leave the midfielder Oston Urunov. 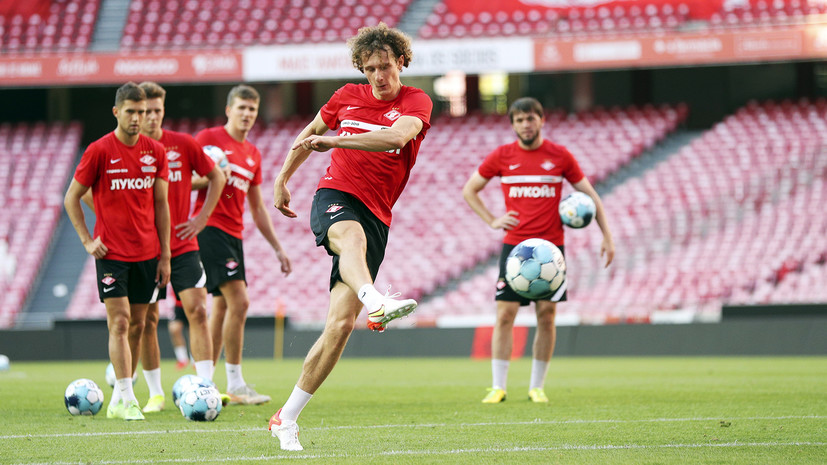 Moscow "Spartak" continues to go through hard times and remain a supplier of not the most pleasant news for their fans. This week, the red and white suffered their fourth defeat in the first five official matches of the season and ended the fight in the Champions League. The second loss to Benfica not only sent them to the Europa League, but also caused an extremely negative reaction in the Russian football community.

It got to the point that the veterans of "Spartak" began to act. The former players of the club signed an open letter demanding to "put things in order" in the team, but they addressed it not to the owner of the current vice-champions of Russia Leonid Fedun, but to the head of LUKOIL - the main sponsor of the team - Vagit Alekperov. Among others, the appeal was signed by Dmitry Alenichev, Yevgeny Lovchev, Roman Pavlyuchenko, Yegor Titov, Yuri Gavrilov, Anzor Kavazashvili, Voitsekh Kovalevsky, Eduard Mor, Valery Shmarov and Viktor Bulatov, Sport-Express reports.

The letter contains fierce criticism of Fedun. The veterans recalled that since the vice-president of LUKOIL became the main owner of the club in 2003, 16 coaches have changed, and only two trophies have been won. The signatories noted that during the same period the main competitors of the red-and-white Zenit and CSKA were able to achieve great success. Also, the veterans' anger was caused by the actions of Fedun's common-law wife Zarema Salikhova, who was previously a member of the board of directors of Spartak. In their opinion, she provoked scandals that negatively affected the image of the club.

“In the end, she quarreled with everyone, created an unbearable environment for club employees and team members, in which Spartak gave up a place in the UEFA Champions League without a fight and began the Russian championship with two defeats in three matches. Fedun himself not only did not interfere with the creation of such an environment, but during the days of the most important matches for reaching the Champions League against Benfica, he flew from Lisbon on vacation to France, where, together with Mrs. Salikhova, he enjoys a beautiful life. And all the people who are not indifferent to "Spartak", at the same time, disentangle the consequences of its destructive actions in the style of the TV show "Dom-2", - said in the letter.

Former players and coaches of "Spartak" turned to Alekperov, as appeals to Fedun, in their opinion, no longer "make sense."

They noted that in the past, fans dissatisfied with the team's results had already staged protests against the oil company headed by Alekperov.

Veterans are confident that history can repeat itself.

The signatories of the letter also drew attention to the fact that the scandals and deterioration of the results fell on the season at the end of which Spartak will celebrate its centenary.

Former goalkeeper of "Spartak" Anzor Kavazashvili said that he would seek Fedun's departure from the club.

He believes that the owner of the team is not coping with his duties, and this could harm her even more.

“We are just signing this letter, we haven’t sent it anywhere yet. Today we met with Yevgeny Lovchev and signed. Now the rest will sign it. A very terrible moment has come for us. We have been rooting for this club since childhood. We are worried about the endless scandals that come from the people in the club. This is a big blow to the great club. The fans are outraged by this state of affairs around the club. For 16 years in "Spartak" Leonid Fedun has only two trophies. We want to ask Mr. Fedun to leave the team. He kills the psychology of people who love Spartak. Fedun is unable to cope. It is very dangerous, ”Kavazashvili said.

One of Spartak's problems at the moment is that the club has existed for more than a week without a sports director. Dmitry Popov, who previously held this position, resigned, announcing this during the break of the first match with Benfica in the Champions League. In his commentary on this, he also criticized Fedun's actions at the head of the club.

A new sports director has not yet been appointed, but one of the candidates for this post is already known.

The publication A Bola reports that this is the former president of the Portuguese "Leiria" Alexander Tolstikov.

In the past, he worked as head of the selection department of Krasnodar, when Sergey Galitsky's club just started playing in the Russian Premier League (RPL).

It is noted that Tolstikov is fluent in Portuguese, and this should help him to establish a common language with the current head coach of Spartak Ruy Vitoria, whose start at the Moscow club was the worst in its modern history.

However, the famous journalist Nobel Arustamyan has a different opinion on this matter.

He believes that only foreigners with experience of working in European clubs are considered for this position, and the appointment will take place in September during the pause for the national teams.

At the same time, Spartak continues to form the line-up until the transfer window closes on 7 September.

According to Sport24, midfielder Oston Urunov will undergo a medical examination on Friday and will be transferred to Ufa on loan.

The Uzbek footballer has already played out last season at a club from Bashkiria, from where he moved to the camp of red and whites, having signed a contract last summer until 2025.

During this time, Urunov played nine matches for Spartak and scored one goal.

This season, he has not yet been announced for participation in the RPL.

Lately, Spartak may have also lost one possible transfer.

The Turkish edition of Krampon Sports claimed that the Russian club was interested in the midfielder of Fenerbahce and the Greek national team Dimitris Pelkas.

However, the parties could not agree on the cost of the transition - Muscovites offered € 8.5 million, and Istanbulites wanted at least € 13 million.

On August 14, Spartak will play their next match in the Russian championship. The red and white will host Ural, which was recently headed by their former player Igor Shalimov. Yekaterinburg residents currently occupy 15th place in the RPL, gaining only one point in three rounds. And from September 16, the capital team will start performing in the group stage of the Europa League.