Jean Todt visits the Schumacher family every couple of weeks. She praises Corinna’s wife in an interview with a German magazine. 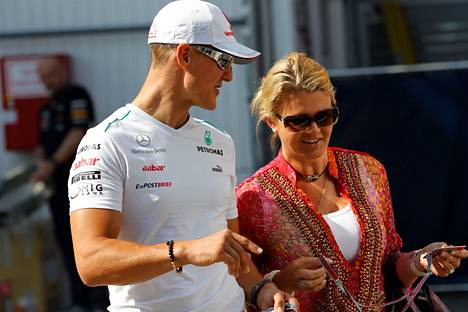 Jean Todt, president of the International Automobile Federation Fia, praises the wife of F1 legend Michael Schumacher Corinna in an interview with the German magazine Bild.

In an interview in June, he said he meets Michael every couple of weeks.

Read more: A moving description of Michael Schumacher's situation from a close friend: “Life goes on just as beautiful”

- I have spent a lot of time with Corinna after the serious downhill accident in Michael on December 29, 2013.

She is a wonderful woman who runs a family, Todt describes and continues:

It (an accident) happened suddenly and he had no options.

But he handles it really well.

I trust him and he trusts me.

Michael and Corinna Schumacher in the Hungarian competition in 2012. Photo: Thomas Melzer

According to Todt, Michael survived the accident thanks to doctors and Corinna.

- Corinna wanted her to survive, and she survived - but with the consequences.

We hope things will improve slowly but surely.

Todt from France worked for a long time as Schumacher’s team manager at Ferrari, and now keeps the ice at the helm of the umbrella organization.

Schumacher's name has not given way to the F1 depot.

Michael’s son Mick, 22, debuted in the series this season.

Todt describes the son and father being “of the same blood with the same goals”.