Messi in Paris: "a big blow for PSG, as much as winning the Champions League"

The arrival of Argentine living legend Lionel Messi at PSG is more a marketing coup than sporting logic. With the six-fold Golden Ball in their workforce, Qatari owners ... 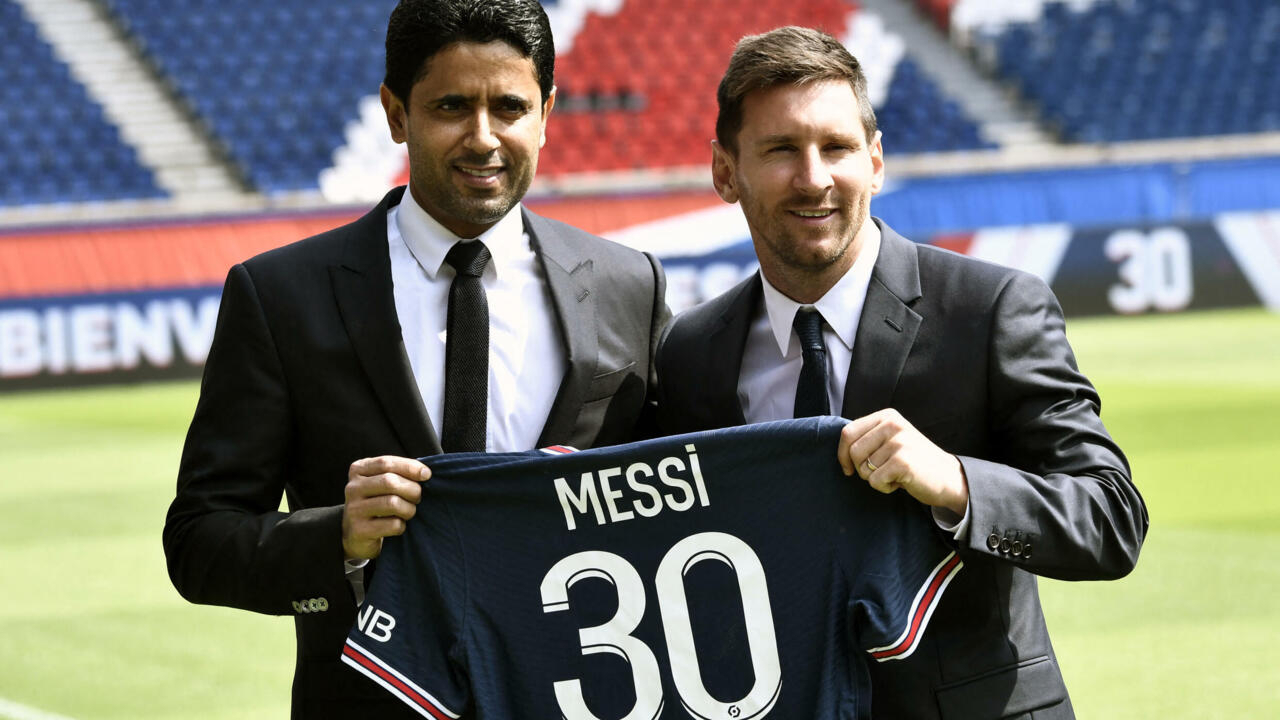 Lionel Messi is not just a football player and PSG has understood this well.

In one of the promotional videos announcing the arrival of the Argentinian superstar in the capital, the Parisian club likens it more to a work of art, a football Mona Lisa, intended to be exhibited in a museum.

Between the lines is obvious: the departure of Lionel Messi from FC Barcelona to Paris SG is not a sporting question but a question of influence and big money.

"The PSG wanted above all to make a big blow in terms of soft-power", analyzes Hubert Artus, journalist, author of "Galaxy Foot - Dictionary of rock, history and politics of football", interviewed by France 24. "Messi in Paris, it is as good for PSG as to win the Champions League "

A man sandwich to sell swimsuits

"Messi, that's for sure. As soon as you recruit him, you have an almost mechanical number of additional revenues: derivatives, ticketing, partners. It's an unmissable opportunity", adds Virgile Caillet, General Delegate of the Union Sport et Cycle, the leading professional organization in the sport and leisure sector, interviewed by AFP.

Unlike Neymar and Kylian Mbappé, bought for more than 400 million euros in the summer of 2017, PSG would not have to pay transfer compensation to FC Barcelona: the player is free.

"For the question of depreciation, there is only the salary, it is much more affordable, if I may say so," smiles the market expert who believes that the Argentine can sell "200 to 300,000 additional jerseys. "

Same story with Jérôme Jessel, independent sports journalist, interviewed by France 24: "Messi alone reported a third of FC Barcelona's income. One can imagine a surge in the sale of shirts in the coming weeks . "

"It may be paradoxical given his age (34), but Messi embodies the future of PSG, both economic and sporting," continues Virgile Caillet.

"His arrival would bring together three iconic brands: Paris, Jordan (the supplier of PSG, Nike sub-brand, Editor's note) and Messi."

Today, the Parisian club, which prides itself on being that of the new generation, is one of the 50 most valued professional sports brands in the world, according to Forbes, which still places Real, Barça, Bayern and others ahead of it. Manchester City despite the slow and patient work of Qatari owners since the club's takeover 10 years ago.

Messi could take it one step further and overtake the historical behemoths before the World Cup in Qatar.

Preparing for the World Cup in Qatar

For Michel Denisot, the former president (1991-1998) of PSG under the Canal + era, interviewed by Le Monde, "everything is done by Qatar to dazzle the world in 2022 with the World Cup and this fantastic team. "

For several years, Qatar has seen in this World Cup which is to take place in 2022, the culmination of its policy of "soft-power" acquired by sport, initiated by the takeover of PSG 10 years ago.

A World Cup-2022 which is the obsession of "la Pulga" according to the Argentinian press: "Messi is in the prime of his life and has his eyes riveted on the World Cup in Qatar, which is why he will continue to bet on European football. And that is why the team that appears on the horizon is the one that has been flirting with him for several years: Paris Saint-Germain ", explains the local daily Clarin.

"Messi will be ambassador for the 2022 World Cup, that is obvious. PSG cannot, at the moment with its finances, ensure alone the financing of the salary and all the sidelines, knowing that the club has almost 200 million losses and that must be sold for 180 million players. And he is not going to sell Mbappé there, it is not possible. Messi will necessarily be associated with the 2022 World Cup ", Jean-Baptiste analysis Guégan, specialist in the geopolitics of sport and football, in Ouest-France.

The fact remains that apart from these purely marketing considerations, what about the reality on the ground?

If the prospect of an MNM attack, including Messi-Neymar-Mbappé, makes PSG fans salivate, is this attacking trident viable in sport?

The three men, if they are undoubtedly among the best strikers on the planet, remain little known for their participation in the defensive effort, which could be crippling to win the Champions League, the holy grail of PSG and the stated goal of Lionel Messi .

"A team is not just an accumulation of talents. An alchemy must be created between Neymar, Messi and Mbappé", recalls Jerome Jessel, emphasizing the obvious.

If, between Neymar and Messi, there is little to worry about, with the two men being friends in real life and former teammates at Barcelona, ​​the association with Mbappé could be more complicated.

In addition, by refusing to renew his contract with PSG which expires in 2022, the Frenchman leaves doubt on a possible departure.

Time is running out: without an extension for the next few weeks, Mbappé will be able to leave France for free in June, and even formalize his contract with a future club from January 1, 2022.

"Kylian is Parisian, very competitive. He said he wanted a competitive team, now there is no more competitive (than PSG). He has no excuse to do something else ( that to stay) ", firmly reframed Nasser Al-Khelaïfi, the president of the Parisian club, on the sidelines of the presentation of Messi.

The XXL transfer window of PSG, with, in addition to Messi, Georginio Wijnaldum, Gianluigi Donnarumma, Achraf Hakimi and Sergio Ramos, is likely to satisfy him.

Even if some questions remain: Paris must strengthen in terms of full-backs and midfielders for several years in order to be competitive in the Champions League.

But will Wijnaldum and Hakimi alone be enough to make up for the shortcomings in his posts?

Ligue 1 is excited but the runoff is a fable

On the side of Ligue 1, the world of French football unanimously praises the arrival of the Argentine prodigy.

The president of the Professional Football League (LFP), Vincent Labrune, hailed "extraordinary news for the exposure of Ligue 1 internationally".

"The arrival of Lionel Messi will increase the attractiveness and visibility of our championship on all continents," he also said, paying tribute to "the strategy of the leaders of Paris Saint-Germain, who enabled the Parisian club to become in ten years one of the biggest franchises in world sport ".

French football is hoping that PSG's profits on Messi's arrival will trickle down to the rest of the clubs. Especially since his signing comes at a time when the players in Ligue 1 have for several months been faced with a drastic drop in their income under the combined effect of the health crisis and the drop in television rights that they perceive, after the failure of the Sino-Spanish broadcaster Mediapro. It was replaced by Amazon Prime, but for an amount cut in half. And the other broadcasters, Canal + and beIN Sports, are contesting in court the amount of what they must pay for the broadcasting of two matches per day.

For international rights, the French championship is a dwarf compared to other major European championships. These rights are evaluated around 80 million euros per year until 2024, far from the 1.5 billion euros that the clubs of the Premier League touch, the Championship which generates the most money, or even 139 million euros from the Italian Serie A (excluding United States and Middle East).

Hoping that the presence of Lionel Messi will boost these TV rights, however, seems wishful thinking.

The leaders and coaches of Ligue 1 forget a little quickly that the domestic and international rights are already all negotiated until 2024. Date on which will have expired the contract of the "Pulga".

What to undermine the theory of runoff in Ligue 1. The arrival of Messi is above all good marketing news for PSG and Qatar and too bad for others.