Hedman believes in Olympic gold: "I won the Stanley Cup in a bubble ..."

There is much to suggest that the Olympic tournament in six months' time will be gilded with NHL players. When some of Sweden's foremost ones gather in Stockholm for a first preparation camp, they do so with a stated goal - Olympic gold. - We go there with a single goal, says Tampa Bay star Victor Hedman. 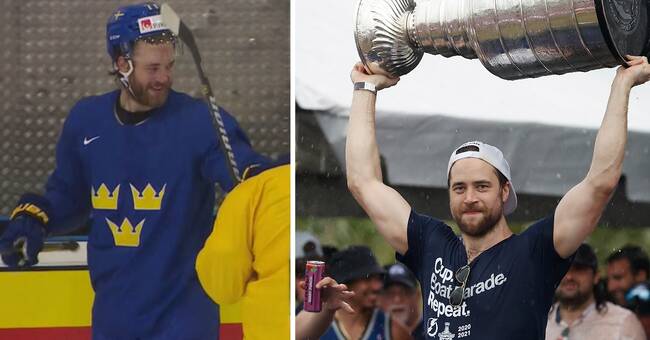 Although it has not been officially announced that the NHL will release its players to Beijing this winter, the league has left a gap in the game schedule during the Olympic weeks.

Once there, it is likely that the ice hockey tournament will take place in a corona bubble.

Something not least Victor Hedman is used to.

- I won the Stanley Cup in a bubble.

It was very strict, you did not leave that bubble either.

So you're used to that.

Hopefully we will get the same result if it happens now, Hedman says to SVT Sport.

Has two straight Stanley Cup victories in the back, the first of which was taken in a corona bubble in Edmonton last year.

Undoubtedly, he will be one of the great leaders in a gold-chasing Tre Kronor this winter.

- It is extremely important that everyone buys their roles directly.

It is hopefully six matches we play, it will go fast.

- We go there with a single goal and that is to win Olympic gold, he states.

Nicklas Bäckström, with a Stanley Cup ring and an Olympic silver medal at home in the trophy cabinet, is also not modest with his ambitions.

- Once it is the Olympics, it is a short preparation and it is important that you get together as a group.

In general over the years, Sweden is very good at getting together as a group and playing a good team game.

That is when you win and that is what we aim for, he says.

Olympic ice hockey begins on February 4, the final is played on February 20. Tre Kronor meets Finland in their group and two teams that have not yet qualified.