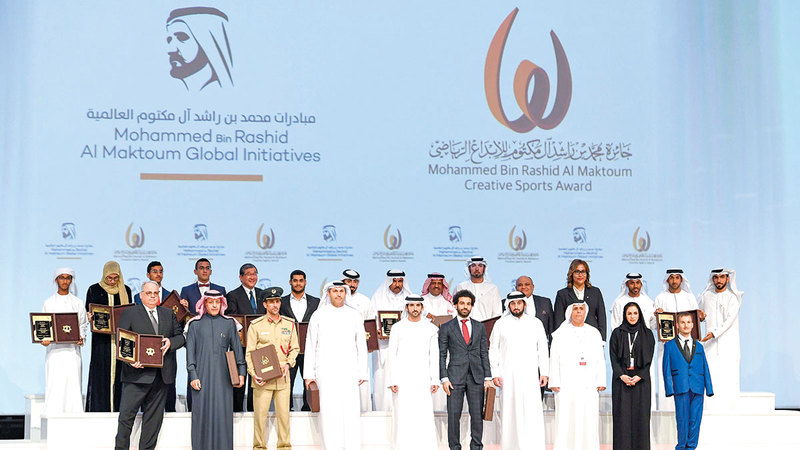 The "Mohammed bin Rashid Al Maktoum Award for Sports Creativity", one of the "Mohammed bin Rashid Al Maktoum Global Initiatives", has started receiving nominations for the winners of the last Olympic Games in Tokyo, from athletes, federations and Arab Olympic committees, aspiring to win the award, following the The award’s approach to honoring the Olympic champions, since its first session in 2009.

The nomination period for the 11th session of the award will be extended until September 15, to allow the Tokyo Olympic champions to be nominated for the largest prize in the sports sector in terms of the award's value and the diversity of its categories.

The award praised the distinguished results of Arab athletes in the Tokyo Olympics, and the achievement of a record number of Arab sports in Olympic participation, amounting to 18 medals, including five gold, silver and eight bronze medals.

The organizers of the Mohammed bin Rashid Prize for Sports Creativity praised the Tokyo Olympics' medal tally, which is four more than the Rio de Janeiro Olympics, which amounted to 14 medals, including only two gold.

A statement issued by the award affirmed that “the increase in the number of medals, and the increase in the number of gold medals to more than double what was achieved in Rio de Janeiro, is evidence of the development and maturity in the selection and development of sports talents in many Arab countries, and the experiences gained by sports federations and Arab Olympic committees. In preparing athletes for this largest sporting event in the world, by honoring their homeland and being on the Olympic podiums.”

The statement added: "This also indicates the development of the technical levels of Arab athletes, and their ability to outperform their competitors in various sports, and from various countries even that preceded our Arab countries in practicing professional sports, and the ability of our athletes to win sports that do not enjoy a large audience in our Arab countries, especially The victory of the Egyptian champion Ahmed El-Gendy, who was awarded the award in 2019 with the title of “Ambassador of Sports Creativity”, and who won the silver medal in the modern pentathlon sport, outperforming world champions from different continents, to confirm his excellence in this difficult sport, and add a new Olympic medal to his balance, which he opened in 2018 by winning the gold medal in the modern pentathlon at the Youth Olympics in Argentina, and added gold medals to it in the World Junior and Youth Championships.

The "Mohammed bin Rashid Al Maktoum Award for Sports Creativity" urged Emirati and Arab athletes of determination to shine in the Paralympic Games, which will be organized in Tokyo, from August 24 to September 5, to achieve new achievements for people of determination, just as Arab athletes have achieved At the Summer Olympics, they set a record in the Olympic Games.

The superstars at the Tokyo Paralympic Games will be able to compete for the 11 categories of the award and join the elite group of champions who received the honor of winning the award, after their Paralympic achievements in Beijing 2008, London 2012 and Rio de Janeiro 2016.