Lack of chances and a goal after two ricochets: how Spartak lost again to Benfica and flew to the Europa League

Spartak lost to Benfica in the second leg of the third qualifying round of the Champions League. The game in Lisbon ended with a score of 0: 2. In the second half, João Mario and Roman Yaremchuk, who made his debut for the Portuguese, scored goals. Rui Vitoria's wards suffered their fourth defeat under his leadership and will now play in the group stage of the Europa League. 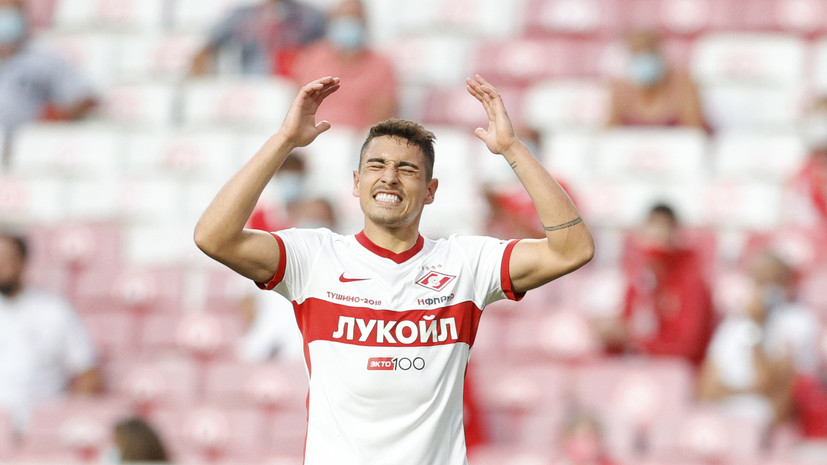 Over the past week, since Spartak suffered a 0-2 defeat to Benfica at home and significantly reduced their chances of reaching the Champions League play-off round, the Red and White fans have had no reason to be optimistic.

The team continued to fever both on and off the pitch.

Before bringing the team to his homeland, the head coach of the Muscovites Rui Vitoria could not beat the debutants of the Russian Premier League Nizhny Novgorod. This defeat was already the third for the Portuguese specialist in four official matches. But even this inexpressive start of the country's vice-champions turned out to be not as loud as the departure of its sports director Dmitry Popov from the club and the subsequent Telegram wars between him and the wife of Spartak owner Zarema Salikhova, who revealed many amazing details of the club's inner cuisine to fans.

Even if there were no problems with the atmosphere and results, Spartak would still have to solve a problem of increased complexity in Lisbon. The last time the red-whites managed to win away in the Champions League with a difference of two goals was 15 years ago. Then the charges of Vladimir Fedotov beat Sporting in the same place, in Portugal, with a score of 3: 1. The team would have benefited greatly from Vitoria's past experience with Benfica, but in most cases it was unsuccessful - at the head of other Portuguese teams, he lost to the Eagles ten times out of 13.

The picture was also darkened by the staffing problems of Spartak. In the match with Nizhny Novgorod, midfielder Viktor Moses was injured, and he joined Quincy Promes, Pavel Maslov and Georgy Melkadze in the infirmary. As part of the return to the 4-3-3 scheme, Vitoria made a noticeable rotation and immediately added Zelimkhan Bakayev to the attacking trio to Esekiel Ponce and Jordan Larsson. Aleksandr Lomovitskiy joined Nail Umyarov and Roman Zobnin in the center of the field, having played half a time this season. There were also substitutions in defense: instead of Ilya Kutepov, Georgy Dzhikia came out against Benfica from the first minutes.

“Spartak” remembered that he needed to win back two goals, and tried to act as the first number, but it turned out quite rarely and not for long.

More often the initiative was owned by the Benfica players, who didn't really need it.

In the first 15 minutes, the hosts were able to create little in the attack, limiting themselves to canopies from Joao Mariu.

Seeing such a voluntary passivity of his rivals, Samuel Zhigot sent Bakaev to a counterattack, and then forced Nicholas Otamendi to earn a yellow card.

Then the wards of Jorge Zhezos nevertheless turned on the pressure and dug themselves firmly in the penalty area of ​​"Spartak".

The guests had to constantly fight off the standards in the performance of Luis Pizzi, but they coped with this task quite well, except for the optional foul by Lomovitsky on Diogo Gonçalves, which led to a return warning.

The entire first half passed without dangerous moments on the part of both teams, although by the end of it the red and white still tried to realize their counterattacking potential.

Bakaev broke forward and moved to the left to Ayrton, but with a little loss of time he only shot from a distance, without creating big problems for goalkeeper Odysseas Vlachodimos.

After the break, more open football started on both sides.

“Spartak” more and more often found themselves with the ball at other people's gates, but Benfica didn’t sit idly by and periodically staged races to Maksimenko’s goal.

When it seemed that the game had leveled off, and Larsson's next strike would nevertheless reach the goal, Benfica showed how to use their chances.

Rafael Silva bounced back with Gonçalves and shot on target, Jikia blocked the shot, and after finishing off Mario still scored his second goal for Spartak.

Muscovites now had to answer with three balls, having a little more than half an hour for this.

Vitoria made a double substitution and released Alex Kral and Reziuan Mirzov instead of Umyarov and Bakaev, but these rearrangements did not affect the attacking actions of the team.

Apart from the first corner, earned only in the 74th minute, Spartak did not pose any threat to the home team.

At the end of the meeting, Jesus was actively updating the roster, as a result of which his team as a whole looked as vigorous as at the beginning.

Vitoria, on the other hand, pulled with the following substitutions and released Alexander Sobolev and Mikhail Ignatov only for the last ten minutes, when their partners were no longer going to change anything in the game.

Ignatov managed to create only one sharpening pass for Mirzov, who ran offside.

In the added three minutes, Benfica were able to repeat the result of the last match. Ukrainian striker Roman Yaremchuk, who came on as a substitute in his debut match for the team, gave Mario a chance to score a double with a cutting pass, but the Portuguese returned the ball back. Ayrton, who was watching this, did not prevent Yaremchuk from hitting himself, and with a rebound from two Spartak defenders at once, the ball again ended up in Maksimenko's goal net. The Reds and Whites will continue to play in the Europa League and will join Lokomotiv in the group stage, while Benfica will face PSV in the next round of the European main tournament.