Fun, harmony and focus in the national team camp in preparation for the 2022 World Cup qualifiers

The national football team continues its external camp, currently in Serbia, and continues until the 13th of this month, and the white performers daily training under the leadership of Dutch coach Bert van Marwijk, in preparation for the matches of the final qualifying round for the 2022 World Cup. 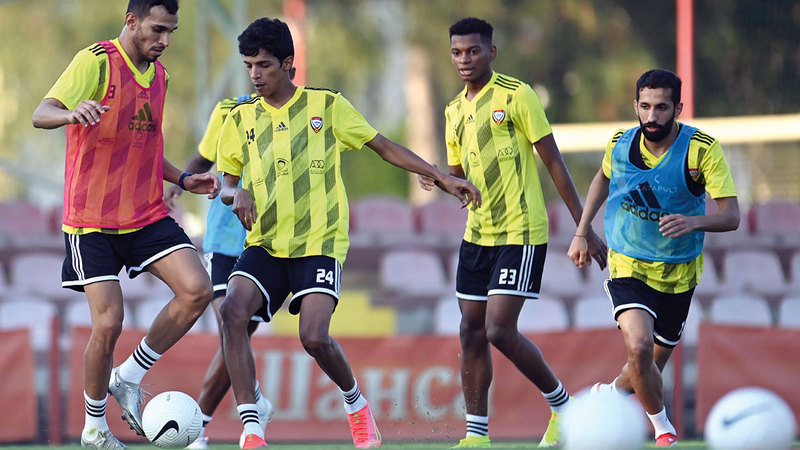 Marvik explains to the players the game plans

Fun, harmony and focus in the national team camp in preparation for the 2022 World Cup qualifiers

Part of the national team training camp in Serbia.

The national football team continues its external camp, which is currently in Serbia and continues until the 13th of this month, and the white performers daily training under the leadership of Dutch coach Bert van Marwijk, in preparation for the matches of the final qualifying round for the 2022 World Cup, as the team plays in the first group that includes alongside him teams South Korea, Iran, Iraq, Syria and Lebanon.

Al-Abyad begins his journey in the final round against his Lebanese counterpart on the second of next September, followed by the meeting of the Syrian team on the seventh of next month.

The team had inaugurated its training in its camp in Serbia last Saturday as part of the first phase of its preparation, while the second phase of preparation will begin, according to what was officially announced by the national team committee in the Football Association, starting from the 26th of this month until the date of the team’s match with Lebanon in its first stop in these qualifiers.

The Football Association broadcast on its official website on Twitter a video in which the players of the national team are shown performing their training with enthusiasm, seriousness and great discipline, sensing from them the great responsibility placed on their shoulders during the upcoming appearance of the team in these qualifiers, which requires preparation and good preparation from all sides to enter these qualifiers. The matches and the great challenge faced by the team, which seeks to qualify for the World Cup finals, to repeat the scenario of its historical achievement when it qualified for the 1990 World Cup finals in Italy for the first time in the history of UAE football.

And it appeared through the video, while the members of the mission were in the private bus carrying them, the extent of harmony and great understanding between the players, as well as between the players and the technical and administrative bodies, and the spirit of cooperation, friendliness and fun that prevails among all members of the team mission in Serbia, which is reflected positively on the general performance of the players. And raise their enthusiasm and fighting spirit on the field.

Coach Marvik began the training session with physical fitness exercises to check on his players and to determine their physical condition and their readiness, then the exercises moved to the technical aspects and careful follow-up by the coach of the team, who was keen himself to be on the field among the players to issue instructions to them, and to know the extent of their response and understanding. For these exercises and how to benefit from the current camp period.

Coach Marvik appeared through the videotape explaining to the players the special technical and tactical plans, while the team seemed to be training in a beautiful and wonderful atmosphere and in one of the beautiful stadiums in Serbia.

The technical staff of the national team seeks to achieve the maximum possible benefit from the current camp, despite the shortage in the team, after six players were excluded, including key elements, such as Fabio Lima, Ali Salmin, Khalfan Mubarak and Youssef Jaber due to injuries.

The team's training in the Serbia camp witnessed special exercises for goalkeepers Ali Khasif, Adel Al-Hosani, Fahd Al-Dhanhani and Mohammed Al-Shamsi, as each of the four guards compete to be in the starting lineup and defend the white den during his expected appearance in the World Cup qualifiers.