Ultimatum of fans, media war with Popov or defeat of Spartak: what forced Fedun's wife to close her Telegram channel

The wife of the owner of FC Spartak, Zarema Salikhova, announced the closure of her Telegram channel, in which for two months she published information about the internal processes in the Moscow club and harshly criticized some of its former and current employees. This happened after the team was defeated by Nizhny Novgorod in the third round of the RPL, and the unification of fans demanded that Leonid Fedun limit the presence of his wife in the media space. Salikhova herself explained the decision to close the Telegram channel by the loss of interest in the resource. 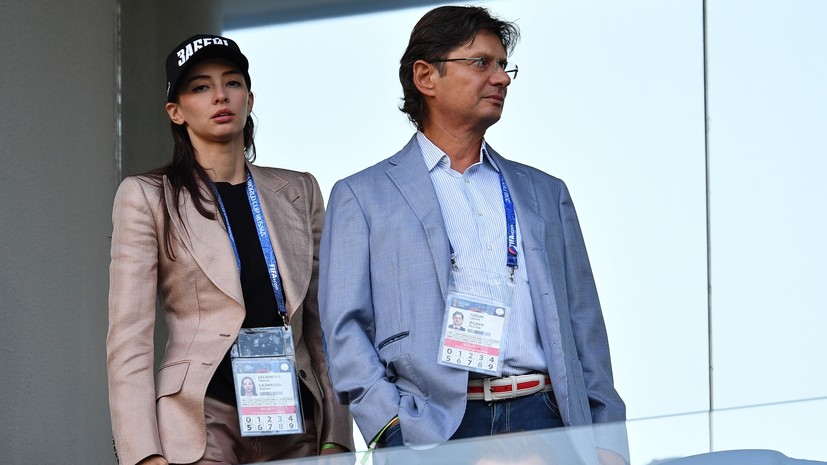 The scandalous story around Zarema Salikhova's Telegram channel has come to an end.

The wife of the owner of the Moscow "Spartak" Leonid Fedun announced her intention to delete the resource, where for several months she published internal correspondence with the club's employees and spoke harshly about their work.

She announced her intention to suspend her activities in Telegram to Sport-Express.

“It is in the interests of Spartak to put out the information fire that has flared up in recent months as soon as possible.

That is why I am leaving the Telegram channel.

Stop stirring up the past.

And arguing with former employees of the club about what has already happened is completely pointless.

I respect the club and the fans, I see the reaction and I think that now it will be the only right decision, ”Salikhova said.

However, Fedun's wife did not manage to immediately resolve this issue and leave the media space.

Even though new users cannot subscribe to Salikhova's channel, more than 50 thousand people who have followed him still have access to publications.

However, the ability to comment on messages has already disappeared.

“Unfortunately, it was not so easy to instantly delete the channel, so I contacted the technical support of Telegram.

And everyone who will write something in Telegram on my behalf, from this day on, have nothing to do with me.

In any case, this is already the past.

Now what will be is much more important.

I hope that everyone who wishes Spartak well will also focus on football.

The channel of Fedun's wife has attracted great public attention since its appearance in June, but it became especially intent last week, when Dmitry Popov left the post of sports director of the red and white.

And this happened during the Champions League qualification match between Spartak and Benfica.

According to the functionary, one of the reasons was "constant humiliation" by Salikhova, who regularly spoke harshly against a former employee of the Moscow club.

In particular, she criticized him for failures in the transfer market and attempts to part with the current leaders of the team - Jordan Larsson, Georgy Jikia, Victor Moses and Samuel Gigot.

Then Popov opened his own channel in the messenger. He motivated this step with the intention "to end the madness that surrounds Spartak after Mrs. Salikhova entered the media space." The former sports director demanded that she stop "attacking the coach, players and club staff", and otherwise promised to present "facts in response to hypocritical statements." This event had no effect on Fedun's wife, as a result of which screenshots of correspondence with her participation began to appear on the Telegram channel.

In particular, they contained her harsh statements about the ex-mentor of “Spartak” Domenico Tedesco, whom, according to Salikhova herself, she always defended. So, in one of the recent messages, Zarema assured that she “never was against” the German coach and “did not abandon him” even after hard and offensive defeats. At the same time, in the materials published by Popov, Fedun's wife discussed the possible resignation of a specialist and expressed the opinion that fans would "cheer" on this event.

Among other things, Popov published screenshots of private correspondence with Salikhova, where she asks to urgently part with the recently acquired defender Victor Moses, promising to "take on Tedesco's hysteria", and also participates in the selection of the new head coach of Spartak. In particular, she asked to take into account the presence of the letter "p" in his name and surname, as well as the sign of the zodiac.

I now pay attention to everything ... People born on April 16 have innate qualities of a mentor, teacher ... All Aries are characterized by the fact that they do not give emotional warmth.

Well, you can work on this, ”Salikhova wrote.

She herself tried to reduce everything to a joke and said that she only laughed at Popov, talking about the need to take the zodiac sign into account when choosing a specialist.

Not without a couple of offensive words and accusations against the functionary, as well as reminders of his past "mistakes".

“Someone has a very bad sense of humor.

I just trolled you, seeing all the blatant sexism towards me.

) about horoscopes, costumes and hairstyles.

And according to the horoscope, you are just a rat.

Karpin passed at one time, Emery did not support, and now he ran away from his own coach with the score 0: 0.

A deserter for life, ”Salikhova wrote.

Against the background of this conflict, the team itself began to show unsuccessful results.

First, Spartak was defeated by Benfica in the Champions League qualification, and then sensationally lost to the RPL debutant Nizhny Novgorod.

The meeting at the Otkritie Arena stadium ended with a score of 2: 1 in favor of Alexander Kerzhakov's wards, and during the match, fans chanted insulting chants at Fedun's wife, demanding that the club owner limit her presence in the media space.

The day after the defeat to Nizhny Novgorod, the Supporters Group posted an appeal to the club's board of directors and its owner in the Telegram channel of the Spartak supporters' association. It put forward a number of demands, among which was the end of squabbles between persons identifying with the red and white, as well as the immediate removal of Salikhova's resource.

“In our ideology, one principle has always been at the forefront - team support! At any time, we have always held the balance and did not shift our sights to individual players, coaches and functionaries! But in this egregious situation, we will be forced to act radically and harshly, to do everything to cleanse our house of the creatures parasitizing and hyping on the club's holy name. Spartak is a legendary team, the country's football history, a global brand, and the sincere love of millions of people! "Spartak" is not a platform for satisfying personal ambitions and not a clothesline for dirty panties! Its players, staff and fans have never been and will never become the court jesters of the self-proclaimed "queen"! Our requirements are higher! Action is behind you! Otherwise, we will continue to act! Do not dishonor our name, ”the address said.

It is difficult to say what exactly prompted Salikhova to remove the Telegram channel - a statement from fans, the publication of her personal correspondence on the part of Popov, or the possible pressure of her husband.

At the same time, Zarema herself said that she came to this on her own.

“The decision to remove the Telegram channel was made independently.

Fedun did not ask me, ”Sport24 quotes Salikhova.

Fedun's wife explained that she “no longer needed Telegram,” but such explanations are hard to believe.

Indeed, a few days ago, Salikhova actively expressed her opinion about the transfer policy of the club, severely insulted the current sports director and the team's development and communications director - Dmitry Popov and Anton Fetisov, respectively.

“Now there is no point in fighting a fugitive employee (Popov. -

). Unfortunately, during his time in the club, he did not manage to correctly staff the team. “Spartak” has important games ahead, we need to focus on the result ”, - quotes the words of Salikhova“ Championship ”.