It's "88" National Fitness Day again! Have you started exercising after watching the Olympics?

Data map: On April 23, a citizen jogged in the Wangjing Culture and Sports Park in Chaoyang District, Beijing. Photo by China News Agency reporter Hou Yu   Chinanews client, Beijing, August 8th (Reporter Xing Rui) In a blink of an eye, it will be August 8, the annual National Fitness Day. This day happens to be the closing day of the Tokyo Olympics. When the fitness concept of universal participa 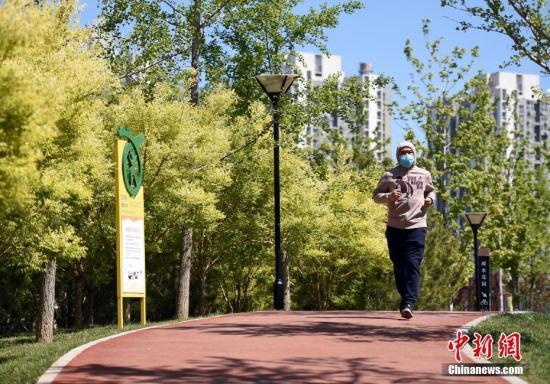 Data map: On April 23, a citizen jogged in the Wangjing Culture and Sports Park in Chaoyang District, Beijing.

Chinanews client, Beijing, August 8th (Reporter Xing Rui) In a blink of an eye, it will be August 8, the annual National Fitness Day.

This day happens to be the closing day of the Tokyo Olympics.

When the fitness concept of universal participation and the Olympic spirit of "faster, higher, stronger, and more united" collide with each other, will the masses' enthusiasm for sports become even higher?

On the night when Su Bingtian broke the men's 100-meter Asian record with 9.83 seconds, Zhao Haoran, who was standing in front of the TV, jumped excitedly.

Nine years ago, Su Bingtian reached the semi-finals at the London Olympics and became the first person in the history of Chinese track and field.

Because of his busy life, Zhao Haoran once gave up the fitness habit he had cultivated in school.

As he grows older, he finds that his control over his body is not as good as before: "I used to run 5 kilometers in half an hour, but now I start to pant after running 3 kilometers."

Until he witnessed the 32-year-old "Su Shen" breaking the Asian record at the Tokyo Olympics, the 31-year-old Zhao Haoran's desire for sports was once again ignited.

He told reporters: "Although I am not a professional athlete, Su Bingtian, who is in his 30s, can perform miracles. Why should I give up sports?"

For the Tokyo Olympics, there are many veterans like Su Bingtian in the Chinese delegation: they are no longer young, they have overcome years of injuries and the postponement of the Olympics; some have even been promoted to mothers, leaving their young children, and choosing to be on the field. Let go...Looking at the familiar old faces, would you like to let go of the anxiety about age, like Zhao Haoran, go back to the football field, return to the gym, and experience the physical and mental pleasure brought by sports?

In fact, in every Olympic Games, while professional athletes are fighting on the field, the general public will more intuitively feel the charm of sports.

Sports scholar and professor of Shanghai Sport University Zheng Jiakun said in an interview with a reporter from Chinanews.com that competitive sports plays an irreplaceable role in promoting sportsmanship and creating a national fitness atmosphere: "Competitive sports is the vanguard of excellence and unity. The positive energy is the forerunner of cultural promotion, and has the functions and values ​​of motivating, leading, demonstrating, popularizing. It can promote the development of mass sports in vigorously promoting the spirit of sports, creating a social atmosphere for national fitness, and popularizing national fitness culture. "

Since the successful hosting of the 2008 Beijing Olympics, the development of China's mass sports has reached a new level.

Promoting national fitness has gradually become one of the focuses of national and social attention.

After more than ten years of development, we can also deeply feel that the domestic "sports soil" has become more fertile: the "National Fitness Concept" is accepted by more and more people, the number of people participating in sports is increasing, and the fitness facilities are gradually Increase... Along with the changes visible to the naked eye, the Chinese people have a more mature understanding of competitive sports.

The most obvious change is undoubtedly that the audience has put aside their persistence and enthusiasm for the gold medal, and has given more trust and encouragement to the athletes.

In Zheng Jiakun’s view, this change is due on the one hand to the belief that “winning or losing is not the whole of the Olympic movement” is deeply rooted in the hearts of the people; With a narrow view of victory and defeat, we should also see the sportsmanship brought to us by the athletes on the field. This is also the power and charm of sports."

Data map: A citizen runs and exercises in a gym in Tengda Building, Haidian District, Beijing.

Zheng Jiakun believes: "Competitive sports and mass sports are the two wings of sports development. They interact and influence each other." However, even if the Chinese delegation has repeatedly achieved great results in the Tokyo Olympics, the public is no longer "only gold medalist", but the national fitness The atmosphere is still not fully formed.

“The problem of lack of students’ sports literacy still exists. The concept of mass fitness still needs to be guided. The concept of fitness for the elderly and women, young and middle-aged groups, and employees of enterprises and institutions is weak and lacks mobility. The'saddle-shaped' structure of the fitness population has not been changed," Zheng Jiakun said so.

Just before the arrival of "National Fitness Day" in 2021, the State Council issued the "National Fitness Plan (2021-2025)" (hereinafter referred to as the "Plan"), which is practical and feasible for solving the difficulties and pain points that currently plague the development of national fitness. Plan.

The "Plan" mentioned that it is necessary to "promote the development of fitness activities for key groups", including groups such as teenagers, the elderly, farmers, and women.

In addition, the "Plan" also puts forward new tasks for the supply of facilities, events, and sports industry.

"Fitness for all, walk with the Olympics" is the slogan of this year's National Fitness Day, and it is also a hope for the comprehensive and balanced development of competitive sports and mass sports.

After the Tokyo Olympics, the Beijing Winter Olympics will have less than 200 days to begin, and the Olympic wind will once again sweep across the land of China.

At that time, we also hope to see the seeds of nationwide fitness continue to take root, grow vigorously, and bear fruit.