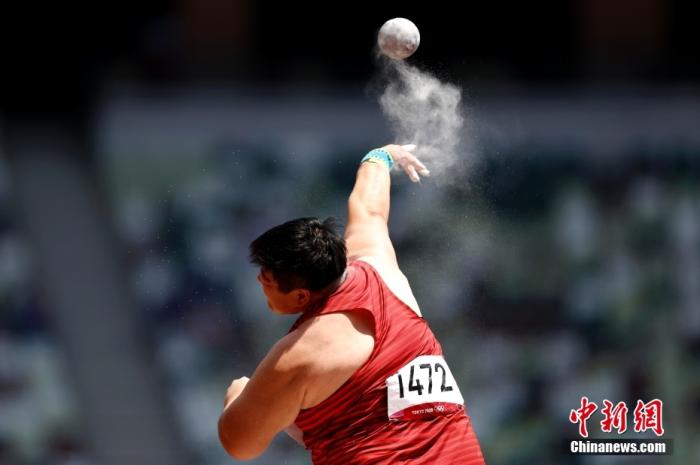 2 gold, 2 silver and 1 bronze, China's track and field ended in the Tokyo Olympics.

Although the number of gold medals is the same as the last Rio Olympic Games, "breakthrough" is the most shining key word in China's track and field at this Olympics.

This is Gong Lijiao's first Olympic gold medal in his career, as well as the first gold medal won by the Chinese track and field team in this Olympics.

The two gold medals won by China's track and field in this Olympics were both from women's throwing. Gong Lijiao and Liu Shiying won the first Olympic gold medal of the Chinese team in shot put and javelin respectively. This is also the first time that China has won gold medals in field events.

At the Tokyo Olympics, she got what she wanted, establishing an absolute lead in the first shot, and then throwing another 20m 58 in the last shot to refresh her best performance in her career.

Similar to Gong Lijiao's strong script for winning the championship, Liu Shiying also won with one shot in the javelin final.

She threw 66 meters 34 on the first shot, and no one has surpassed this result ever since.

There are also two young athletes entering the shot put finals in this Olympics. Lu Huihui ranked fifth in the javelin, showing the depth of the development of Chinese women's throwing.

It is foreseeable that the women's throw will be an important gold point for the Chinese team in the future.

In addition, in the men's triple jump final, Zhu Yaming won the runner-up with a personal best score of 17.57 meters, creating the best Olympic results for a Chinese player in this event.

The picture shows Su Bingtian in the game.

In the sprint event that requires extremely explosive power, it was difficult for Chinese and even Asians to get involved in the past.

To the surprise of the outside world, the Chinese team has made history in many events in this Olympic track.

Su Bingtian, who competed in the Olympic Games for the third time, successfully advanced to the men's 100-meter final and became the first Chinese player in history to enter the final of the event. He ran an astonishing 9.83 in the semifinals and set a new Asian record.

Xie Zhenye also became the first Chinese in history to stand on the men's 200-meter semi-final runway of the Olympic Games.

The women's middle and long-distance running also ushered in a breakthrough after decades of lows.

Wang Chunyu became the first Chinese athlete to enter the women's 800-meter final in the Olympic Games. In the final, she ran a personal best in 1 minute and 57 seconds and finally finished fifth.

Also bringing surprises was the men's and women's relay. The Chinese men and women 4x100m relay both advanced to the finals for the first time in history.

On August 6, in the women's 4x100m relay final of the Tokyo Olympics, the Chinese team consisting of Liang Xiaojing, Ge Manqi, Huang Guifen, and Wei Yongli won the sixth place in 42.71 seconds.

The picture shows the team members hugging after the game.

Athletics in China that cannot be underestimated

Track and field is known as the "mother of sports." Compared with table tennis, gymnastics, diving and other events, the Chinese team did not perform well in this basic event in the past.

Nowadays, China's track and field, which has achieved a blowout breakthrough, cannot be underestimated.

The breakthrough in China's track and field has long foreshadowed.

This paved the way for the "more blooming" of the Tokyo Olympics.

After the Beijing Olympics, China's track and field started the development path of "going out and inviting in". By hiring high-level foreign teachers, establishing foreign training bases and other cooperation methods, we strive to go from "outstanding" to "multiple blossoms."

During the Tokyo Olympic cycle, the Chinese track and field team hired as many as 17 high-level foreign teachers. Under the advanced training concepts, Chinese athletes quickly moved closer to the world's first-class athletes.

The introduction of foreign teachers has also promoted domestic coaches to be in line with international high-level training concepts and other aspects, helping to form a healthy internal competition pattern.

Before the epidemic, there were 22 overseas training bases signed by the Chinese track and field team, and nearly 60 players trained abroad all the year round. It is convenient for players to participate in international competitions nearby and compete on the same arena with international masters, and then continue to improve their level through competition training.

The only regret is that the Chinese team only won a bronze medal in the traditional competitive race.

However, it is undeniable that the advantages of the 20-kilometer race walking group in China are quite obvious. The participating players have the ability to hold cards and even gold, and the talent echelon construction is relatively complete. In time, they will be able to stand on the highest podium again.