A penalty kick from a historic Olympic gold. But it was Olympic silver for Blågult - again. 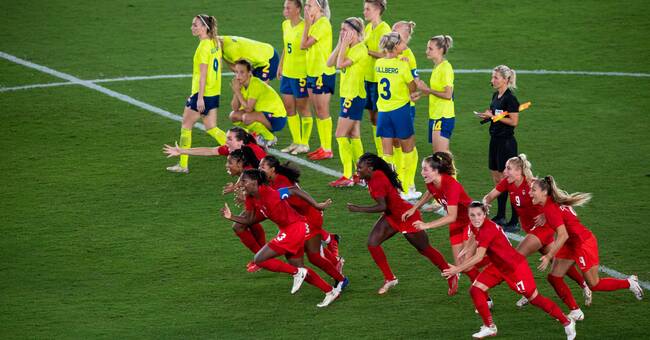 They started the championship by driving over the reigning world champions USA with 3-0.

The final against Canada, which went there after defeating Brazil in the quarterfinals and the United States in the semis, went to penalties - where Sweden fell after missing four penalties.

Leading goal scorer of all time

After having the first real goal chance of the final (nod by Sofia Jakobsson) after half an hour of play, it was also Sweden who got to cheer five minutes later.

After a ball win in midfield by captain Caroline Seger, Sweden switched and Kosovar Asllani found Stina Blackstenius who poked in the redemptive 1-0 goal.

The goal was the striker's fifth in the tournament, and seventh overall in the Olympic context.

Thus, 25-year-old Blackstenius has stepped past Lotta Schelin as Sweden's top scorer through the ages in the tournament.

The result stood out the half.

A half where Canada did not dominate with a single shot on goal.

Canada made a double change at half time and then got better speed on the attacking game, and with just over 20 minutes left, they got a golden chance to equalize.

Amanda Ilestedt was then in a duel, after VAR review the referee pointed to the penalty spot and from there Jessie Fleming made no mistake.

The extra time, which was Blågult's first in the championship, was goalless despite a Swedish game advantage in the last five minutes with a number of chances.

In the penalty shootout, both goalkeepers made several saves, and when Jonna Andersson missed her penalty, Hedvig Lindahl had to take Canada's sudden penalty, something she did not succeed in doing.