(Tokyo Olympics) Liu Guoliang: the soul and champion blood of the national table tennis team   China News Service, Tokyo, August 6 (Reporter Yue Chuan) The competition for the table tennis event in the Tokyo Olympics ended on the 6th local time. Liu Guoliang, chairman of the Chinese Table Tennis Association, said in an interview at the competition venue after the game that as the master of the ki 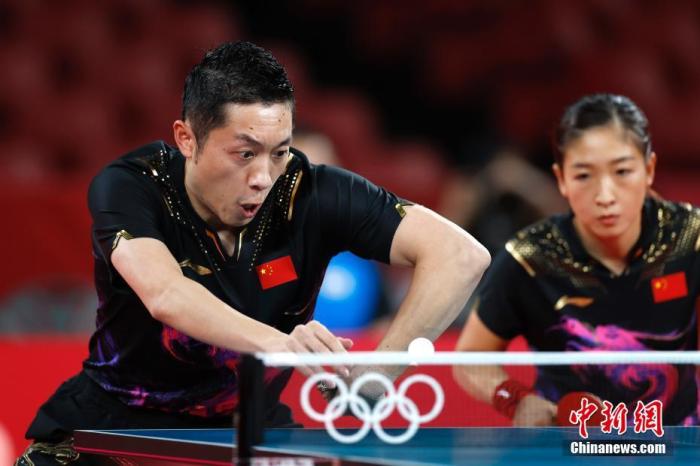 Liu Guoliang, chairman of the Chinese Table Tennis Association, said in an interview at the competition venue after the game that as the master of the king, Guoping defended the spirit of the team and the blood of the championship.

The Tokyo Olympics had 5 individual events in table tennis, and the Chinese team won 4 golds and 3 silvers, a total of 7 medals.

In addition to the men's and women's teams who have both reached the top of the four consecutive Olympic Games, Ma Long and Fan Zhendong took the men's singles championship and runner-up. Chen Meng and Sun Yingsha won the women's singles gold and silver medals. Xu Xin's partner Liu Shiwen won the mixed doubles runner-up.

On July 26, in the mixed doubles final of the Tokyo Olympic Games, the Chinese combination Xu Xin/Liu Shiwen suffered a reversal after winning two games first. They lost the Japanese combination Mizutani Hayabusa/Ito Mima 3-4, but unfortunately won the silver medal.

The Japanese combination of Hayabusa Mizutani and Mima Ito finally won the gold medal from the Chinese table tennis team.

Liu Guoliang revealed that this result put a lot of pressure on Guoping.

"In extremely difficult circumstances, I demand that the team must withstand it. What we are defending is not only the gold medal, but also the soul and champion blood of this king's division." Liu Guoliang said, under this pressure, it is more important. It showed the team's background and the value that the players usually pay, and finally Guo Ping gritted his teeth and carried it.

In Liu Guoliang's eyes, Sun Yingsha's defeat of Mima Ito was a turning point for the Chinese table tennis team in this Olympics.

In the women's singles semi-finals, Sun Yingsha swept the Japanese star Mima Ito, the most threatening national table tennis player, 4:0, helping the team secure the championship ahead of time.

"Sun Yingsha, Chen Meng, and Wang Manyu are of equal strength.'Count the arrows together', this is the foundation of the team's strength." Liu Guoliang said that after the baptism of the Tokyo Olympics, the Chinese women's table tennis lineup for Paris has taken shape.

The picture shows Chen Meng and Wang Manyu in the game.

In his view, the women's team has achieved a new and old transition at the Tokyo Olympics. The three players who participated in the Olympics for the first time completed the set tasks. This is a gain in addition to the gold medal.

In this process, Liu Shiwen, Ding Ning and other veterans played the role of connecting the past and the future, leaving the team with huge spiritual wealth, whose value is no less than the Olympic gold medal.

As for the men’s team, Liu Guoliang believes that many foreign teams are fighting fiercely, which has brought a huge challenge to the national table tennis team.

Under such circumstances, Ma Long, Fan Zhendong, and Xu Xin withstood the pressure and demonstrated their own level.

As he said, at the age of 33 in the Tokyo Olympics, Malone played the role of the mainstay of the team. Defending the men's singles gold medal, he achieved the proud achievement of the "Double Lap Grand Slam".

Liu Guoliang believes that it does not require too much language to evaluate Malone, and it is nothing more than the pursuit of perfection.

"Ma Long is a role model for everyone and has been infecting this team. After so many years, it has been very hard. He did what everyone asked him to do, and he has never disappointed."

The picture shows Xu Xin (left) and Ma Long (right) in the game.

Although he missed the singles champion, Fan Zhendong's performance is equally remarkable.

Especially in the men's team finals, Fan Zhendong reversed the German star Ocharov in the second game and scored an important point for the Chinese team.

"This game is very critical. Fan Zhendong stopped and proved himself that he will also have a huge improvement in confidence." Liu Guoliang said, Fan Zhendong has a breakthrough and has a future.

"The strength of the national table tennis is the result of the joint efforts of generations of table tennis players. This is a team that will always make people proud."

Looking forward to the Paris Olympics three years later, Liu Guoliang said frankly that the women's team will still focus on China and Japan, while the men's team will continue the pattern of the world against China.