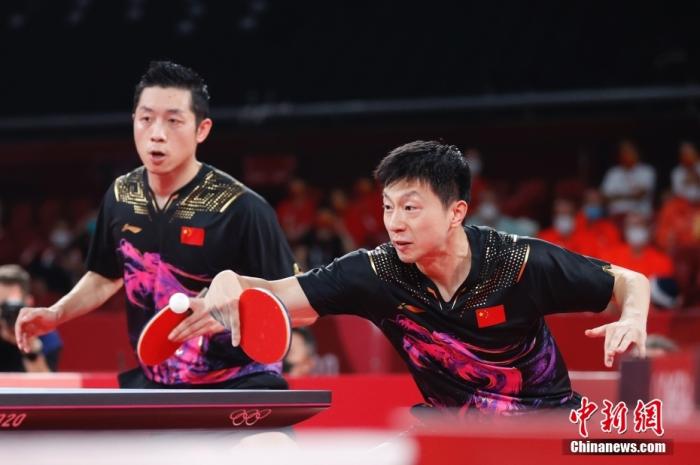 Ma Lin and Wang Hao in the stands stared at the junior and disciples on the arena.

Opposite them is the familiar "old man".

In the Tokyo Olympic Men's Table Tennis Team Finals on the 6th local time, the Chinese team composed of Ma Long, Fan Zhendong and Xu Xin defeated the German team 3-0 and successfully climbed to the top for the fourth consecutive time.

The picture shows Xu Xin (left) and Ma Long (right) in the game.

The clock was set back to the 2008 Beijing Olympics, and the table tennis team competition became an official event.

That year, it was the German team who challenged the national table tennis team in the men's team finals. At that time, Ma Lin, Wang Hao, and Wang Liqin were facing each other across the net with Boll, Ocharov and Huss.

In the past 13 years, the national table tennis lineup has long been updated, but in the Tokyo arena, Malone, Xu Xin, Fan Zhendong competed for the championship, there are two familiar faces: the German team is still the 33-year-old Ochalov. And Boll, who is 7 years older than him.

The two veterans took the relatively young Francesca to challenge the dominance of the national table tennis.

Whether Boll or Ocharov, they have had a close relationship with several generations of national table tennis players.

Especially Malone and Ocharov, who are the same age, have frequent interactions off the court.

Before the men's team semifinals, Ocharov also met with Guoping through social media to "see you in the final."

After five hard games to eliminate the host Japanese team, the German team fulfilled its promise and returned to the Olympic men's team final after 13 years.

As the Japanese team was eliminated in the semifinals, compared to the women's team finals the day before, the venue press center was much looser.

However, this men's team matchup was far more intense than the women's team finals.

The picture shows Fan Zhendong in the game.

Although there was a lot of friendship off the court, they were all real swords and guns on the court.

Ocharov showed great form in this Olympics. In the men's singles semi-finals, he fought with Malone in seven rounds and almost pulled his friend off the horse.

In the semifinals with the Japanese team, Ocharov defeated Niwa Takaki in the final set to help the German team enter the final.

In the final that night, after Malone/Xu Xinbing defeated Boll/Francisco without a sharp edge, and scored a point for the Chinese team, the duel between Fan Zhendong and Ocharov became the most critical contest.

Compared with Ocharov, who quickly entered the state, Fan Zhendong was a little more cautious in the opening stage, and soon lost a game with 3:11.

However, Fan Zhendong, who gradually found the rhythm of the game, quickly equalized the score.

The third game was even more stalemate.

After every wonderful point, everyone in the stands stood up and applauded.

Xu Xin and the men's team coach Qin Zhijian on the sidelines have also been encouraging Fan Zhendong.

At this point, Malone has got up to prepare for the next game.

With a better grasp of the key ball, Ocharov won the key third game and forced Fan Zhendong into a desperate situation.

However, Fan Zhendong did not appear to be too impatient. After changing his clothes, he readjusted his condition and stepped onto the field.

Ocharov failed to withstand the counterattack from the world's No. 1 and lost 2:3.

The picture shows the German team player Ocharov in the game.

"When I fell behind, I was still able to devote myself to the game without thinking too much about other things." Fan Zhendong said, this is the key to his ability to win the game.

"This is very important. 1:1 and 2:0 are completely different. Fan Zhendong stood at the critical moment and proved himself." In the eyes of Liu Guoliang, Chairman of the Chinese Table Tennis Association, for Fan Zhendong, this game represents A breakthrough will greatly enhance his self-confidence.

Grand Slam winner Malone then appeared on the stage. Faced with Boll, who was over 40 years old, the suspense of the game basically disappeared.

With Ball's final return error, the Chinese men's team once again boarded the highest podium in the Olympics with 3:0.

After winning the game, Malone raised his left hand, showing that this was his fifth Olympic gold medal.

Liu Guoliang praised Ma Long after the game, "It doesn't take much language to evaluate Ma Long. He did what everyone asked him to do, and he has never disappointed."

After the game, the players of the two teams gave a high five.

"The reason why the Chinese table tennis team can last forever is because in every era there are people who have bravely stood up and shouldered their own responsibilities." Fan Zhendong said, Ma Long and Xu Xin are his role models.

In the Tokyo Metropolitan Gymnasium, the national flag was hoisted and the national anthem was played for the fourth time.