On July 29, local time, in the women's singles semifinals of the Tokyo Olympic Games, Chinese player Sun Yingsha easily defeated Japanese player Mima Ito 4-0 and successfully advanced to the final. Prior to this, another Chinese player Chen Meng had entered the final, and the Chinese team had secured the Olympic table tennis women's singles gold medal in advance. Photo by China News Agency reporte 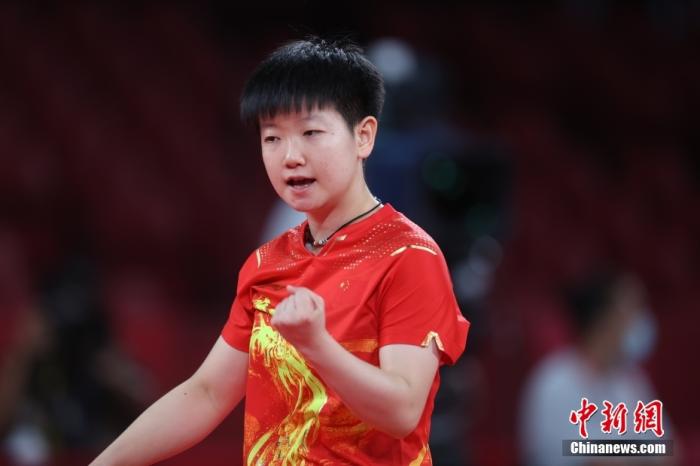 Prior to this, another Chinese player Chen Meng had entered the final, and the Chinese team had secured the Olympic table tennis women's singles gold medal in advance.

Chinanews client, Beijing, August 5 (Liu Xingchen) The Tokyo Olympics has entered the last four competition days, and the delegations are launching a final impact on the medals.

In fact, during each Olympic Games, netizens will show off their potential as a "joke hand" while watching the games and create fresh vocabulary for the occasion.

This edition of the Olympic Crash Handbook for Veteran Drivers will take you to take stock of the "God-made words" in this Tokyo Olympics.

On August 3, Chinese team player Sun Yingsha in the game.

On the same day, the Tokyo Olympic Games held a table tennis women's team competition. The Chinese team defeated the Singapore team and advanced to the semi-finals.

Interpretation: Describes Sun Yingsha's overall suppression of the opponent's momentum against Mima Ito, and also describes the outstanding performance of the athletes.

The two contributed a wonderful duel. Sun Yingsha completely suppressed Mima Ito in the game and defeated her opponent 4:0. The second game also staged a good show of chasing 8 points in a row.

Netizens cried out after watching the game, and "Saqitengteng" was born.

On July 22, the landscape of the Five Rings in Odaiba Marina Park, Tokyo Bay, Japan lights up.

This is the venue for the triathlon of the Tokyo Olympics.

Interpretation: Describes the state of being more excited when seeing Chinese players playing, from the moment the score is stalemate to the overtake.

This is a very popular word outside the stadium, created by Chinese students in Japan.

Everyone sang the song "Singing for the Motherland" and created their own cheering slogans.

When I saw the Chinese team debut, I was very excited.

Zhang Yufei, who had high hopes, played very well this time. In the women's 100m butterfly final, she regretted winning the silver.

On July 29, she successfully won the main event in the 200-meter butterfly.

Less than two hours later, she and her teammates broke the world record and won the women's 4x200m freestyle relay championship.

With another silver medal in the men's and women's 4×100-meter medley relay, netizens believe that the Xuzhou girl's state is "Fei than normal."

This is the ninth gold medal of the Chinese sports delegation in this Olympic Games. Yang Qian has become the first post-00 Olympic double gold medalist in China's sports arena.

Interpretation: Describe the outstanding performance of Yang Qian/Yang Haoran combination and the state of celebration after winning the championship.

On July 27, in the 10-meter air rifle mixed team competition of the Tokyo Olympics, the Chinese combination Yang Qian/Yang Haoran came from behind in the gold medal match and won the championship with 17:13.

Yang Qian shot the first gold for the Chinese delegation this time, and Yang Haoran also won a bronze medal in the previous individual competition.

The excellent state of the two made netizens create this vocabulary.

On the 2nd, Beijing time, in the men's 50m rifle three-position competition at the Tokyo Olympics, Chinese player Zhang Changhong, who entered the final with second place in the qualifying round, played well, breaking the world record with a 466 ring score, winning the Olympic Games and winning the championship.

This is the 27th gold medal of the Chinese delegation in this Olympic Games.

Interpretation: Refers to the scene of Zhang Changhong, the shooting team successfully finishing off after winning the championship on the last shooting competition day.

In the men's 50m rifle three-position final, the last event of the Tokyo Olympics shooting, 21-year-old Chinese player Zhang Changhong hit 466 rings and won the championship with a world record.

After this, the Chinese shooting team successfully concluded with 4 gold medals and 11 medals, the best result in history.

From Yang Qian's shooting of the first gold in the Tokyo Olympics, to Hou Zhihui and Sun Yiwen winning the championship in their respective events, to Shi Tingmao/Wang Han defending the glory of the women's double three-meter springboard, the female athletes opened the curtain of winning the gold for the Chinese delegation.

So far, 21 of the 32 gold medals of the Chinese delegation are related to female athletes.

Netizens said that women can hold up half of the sky, and the Olympics are "infinitely powerful".

On the evening of July 25, Beijing time, in the men's 67 kg weightlifting competition at the Tokyo Olympics, Chinese athlete Chen Lijun won the championship with 145 kg snatch, 187 kg clean and jerk, and a total score of 332 kg, breaking the Olympic records for clean and jerk and total score. Won the sixth gold of this Olympic Games for the Chinese sports delegation.

Turnover in one fell swoop

Interpretation: Describes the Chinese player Chen Lijun's state of winning the championship with his last attempt under adversity, and it is also a metaphor for the scene of a comeback against the wind.

In the men's 67 kg weightlifting final of the Tokyo Olympics, Chen Lijun won the championship with a snatch of 145 kg, a clean and jerk of 187 kg, and a total score of 332 kg.

Before the last try, he was 11 kilograms behind Moskra, who was in the first place.

The Chen Lijun, who broke the cauldron, directly increased the weight by 12 kilograms. As the 187 kilogram barbell was lifted above his head, the referee rang the success bell, and Chen Lijun completed a shocking reversal.

On the evening of July 24, the women's epee individual competition at the Tokyo Olympics ended the final contest. Chinese player Sun Yiwen defeated Romanian Popescu 11:10 to win the championship.

The picture shows Sun Yiwen in the competition venue.

Interpretation: Describes the scene where Sun Yiwen finally killed his opponent in the epee event, and also likened to win with one blow at the last moment.

The two sides reached a tie at 10:10 in the regular time. In the cruel "sword decisive" link, Sun Yiwen took the initiative to complete a sword to seal his throat and kill the opponent.

On July 24, after winning the gold medal in the women's 10m air rifle in the Tokyo Olympics, Chinese girl Yang Qian showed cute and loving actions at the award ceremony.

Interpretation: Described the scene of Yang Qian shooting the first gold of the Tokyo Olympic Games for the Chinese team.

On the morning of the first competition day, in the women's 10m air rifle final, Chinese athlete Yang Qian shot 9.8 rings in the last shot, reversing his opponent and winning the championship, and also won the first gold medal for the Chinese delegation in this Olympics.

Faced with the unfavorable situation of 0.2 ring behind, Yang Qian withstood the huge pressure and successfully won the first gold. The netizens also called the last shot as "a hundred steps to wear Yang".