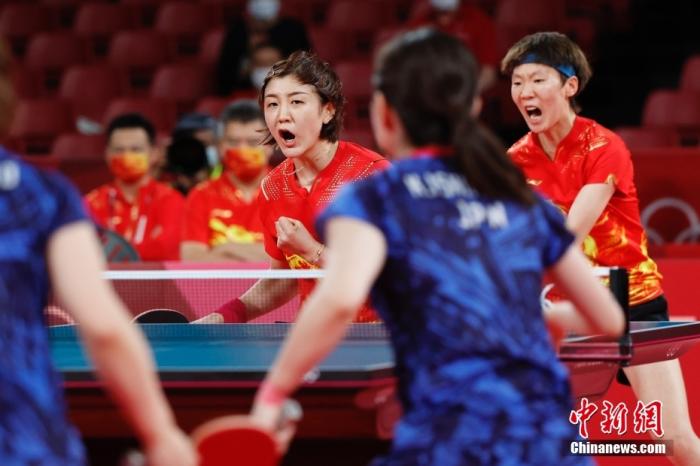 This is the 34th gold medal won by the Chinese sports delegation in this Olympic Games.

The Chinese team and the Japanese team are the top seed and second seed respectively. The overall strength of the two teams is significantly higher than the other opponents. In the process of qualifying for the finals, they both defeated their opponents with the same score of 3:0.

The Chinese team defeated Austria, Singapore and Germany one after another. The Japanese team eliminated Hungary, Chinese Taipei and Hong Kong.

The picture shows Chen Meng and Wang Manyu in the game.

In the first doubles matchup of the final, the Chinese team was played by Chen Meng's partner Wang Manyu against the world number one Kasumi Ishikawa/Miyu Hirano.

The Japanese team performed more positively after the opening, taking the lead with 11:9.

In the second game, Chen Meng/Wang Manyu, who gradually found their form, took a 9:1 lead and evened the score.

Since then, the game has entered the rhythm of Chen Meng and Wang Manyu. Although the Japanese combination has tried to restore the situation through changes, the results have been minimal.

The two have played against each other 8 times before, and Sun Yingsha, who has won 7 wins, has an overwhelming advantage, including a 4:0 win in the women's singles semi-finals of this Olympic Games.

Although Mima Ito's performance has improved in this campaign, she still has little to do in the face of Sun Yingsha's changeable offensive.

3:1, Sun Yingsha scored another point for the Chinese team.

In the third game, Wang Manyu, ranked fourth in the world, played against Miu Hirano.

Wang Manyu always takes the initiative on both ends of the offense and defense, and Hirano Miu occasionally returns brilliantly, but it is difficult to change the trend of the game.

In the end, Wang Manyu won 3:0 and helped the Chinese team secure the championship.

The picture shows Sun Yingsha in the game.

After the game, head coach of the national table tennis women's team, Li Sun, believed that the Japanese players have been improving in recent years, and the team's gold medal was hard-won.

The three young players who participated in the Olympics for the first time completed the arduous task.

"We have spent the past five years in panic, and we have been in fear every day. When it's time to fight, the young players have done a good job." Li Sun believes that the championship comes from the belief in winning, "Regardless of the coaches As an athlete, we always firmly believe that we must never discard the glorious tradition and fine style of Chinese table tennis for decades in our generation."

In the third place game that ended earlier that day, the Hong Kong team of China defeated the German team 3:1 and won the bronze medal.

This is the fourth medal won by the Hong Kong team in this Olympics.

According to the schedule, the 6th is the last day of the Tokyo Olympics table tennis event, and the men's team gold medal will be produced.

The Chinese team consisting of Fan Zhendong, Ma Long and Xu Xin will compete with the German team for the championship.